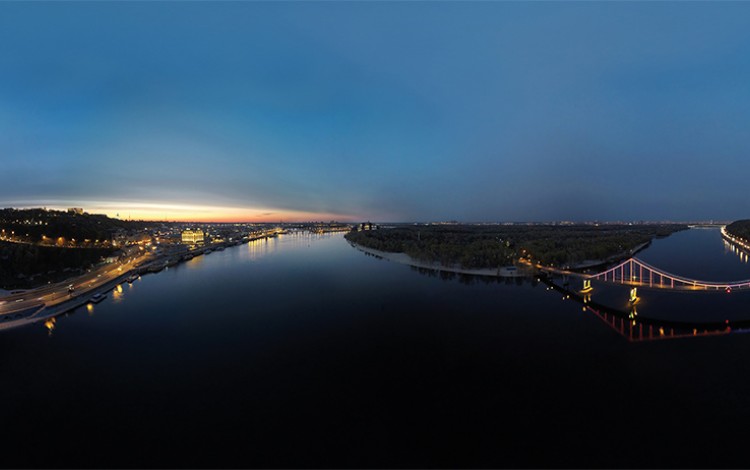 The Ukrainian capital has always been one of Europe’s most photogenic cities. Thanks to the efforts of an innovative Ukrainian photographer, fans of Kyiv can now enjoy the city’s most iconic and unusual locations in 360-degree glory via social media.

IT professional Stanislav Pokutnyy launched the Facebook page “Kyiv 360” in June 2016, within weeks of Facebook unveiling its 360 Photos function. The page has clocked up over 40,000 likes in the past ten months, with popular posts now garnering in excess of two million views. For thirty-five year old Mr. Pokutnyy, the page was an extension of a long-term photography hobby that dovetailed with his interest in innovative technologies and his love for his adopted hometown. A Sumy native, he originally moved to Kyiv in 1989. Despite travelling throughout Europe, he remains in thrall of Kyiv’s beauty and wanted to share this passion with online audiences.

Mr. Pokutnyy uses a combination of spherical cameras and drones in his photography, choosing locations he thinks will be best suited to the 360-degree panoramic format. “It is a very different art to traditional photography, where the photographer’s only concern is the image in front of the camera. With 360 pictures, you have to be careful that there is not a garbage can or pile of junk behind you,” he tells Business Ukraine magazine.

He sees the page as a virtual tour guide for Kyiv and says it has proved particularly popular among Kyiv residents themselves, reflecting the fact that locals do not always have the opportunity to explore the city they live in. “To many people in Kyiv are preoccupied with their everyday problems or artificial political squabbles. We have forgotten to stop and appreciate the beauty of the city around us.”

As well as Kyivites, the page has proved a hit with Kyiv exiles who miss their former hometown and crave the opportunity to explore old stomping grounds. “The 360 format gives you a sense of actually being there,” says Mr. Pokutnyy. “It is great for nostalgia.”

This photogenic Facebook page has already attracted some commercial interest, with everyone from construction companies to leisure venues proposing 360 photo sessions. Mr. Pokutnyy says that while he welcomes such engagement, the photographic imagery has to be right in order for him to agree.

He has also found the project to be a fun way of getting to know the city in a new light. As well as commercial propositions, he is regularly contacted by Kyiv residents with knowledge of lesser known parts of the city that they believe would be ideal candidates for the 360 treatment. “This entire project is a process for me personally,” he says. “Almost every day I uncover something new. It has changed my entire attitude towards Kyiv.”

Photos posted on the Kyiv 360 page feature a minimum of text. Usually this means nothing appears but the name of the location. Mr. Pokutnyy says this is a deliberate choice in order to allow viewers to interpret the images in their own way. “I don’t want to impose my perceptions or vision on anyone. It is a similar approach to art galleries, where you don’t often seen long texts telling you how to interpret any given painting.”

Ultimately, he sees the Kyiv 360 page as a rewarding hobby that allows him to give something back to the city he calls home. At a time when Ukraine’s information space often resembles a proxy warzone, he believes this kind of feel-good online content can make a meaningful contribution. “There is so much manufactured conflict in our lives. This sort of project is not a panacea, but it is a little drop of positivity in an ocean of negativity.”