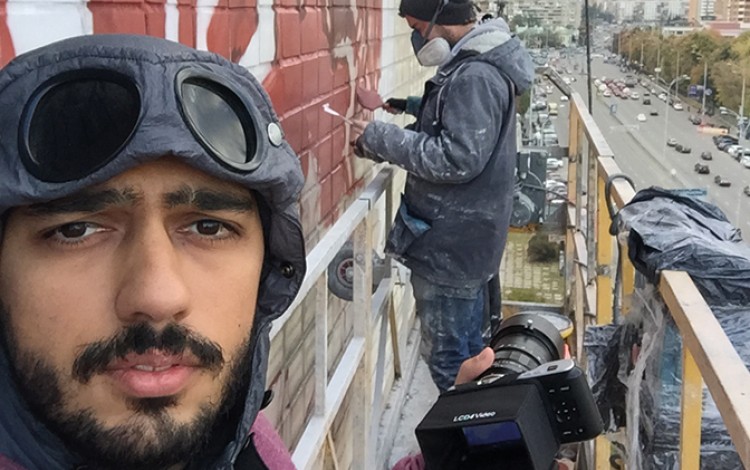 About the interviewee: Geo Leros (saygeoleros@gmail.com) is the creator of the CityArt and ArtUnitedUs mural initiatives
Business Ukraine magazine

Over the past year or so, monumental murals have begun appearing throughout the Ukrainian capital. This welcome development has brought colour and contemporary character to the otherwise grey and dreary panorama of Kyiv’s Soviet-era architecture, creating a much-needed sense of vitality in a city aching for meaningful change. In large part, this street art explosion is the work of one man – Kyiv-born filmmaker and all-round Renaissance man Geo Leros. Buoyed by the broadly positive response to his mural mania, Geo now has his sights set on an even bigger project – transforming the Ukrainian capital into the focal point of a global initiative promoting world peace through public art.

Geo’s involvement in Kyiv street art began in early 2015, soon after he returned to the city from Los Angeles in order to shoot a film about the creation of Ukraine’s new Patrol Police service. The US is the global leader in mural art, with cities like Philadelphia and Miami boasting literally thousands of works, and his time in America had provided Geo with the necessary inspiration to promote the genre in Ukraine. Murals are an appealing art form because they are relatively inexpensive to create while providing artists with the chance to reach mass audiences on a daily basis. However, you cannot simply choose an empty wall and get to work. You must get permission.

Geo recalls how he initially sought contacts within the Kyiv City Administration. After failing to gain an audience with Mayor Klitschko via official channels, he decided to simply turn up at City Hall and try to bluff his way in. The diminutive hipster is not a particularly menacing figure, but this did not prevent City Hall guards from initially detaining and handcuffing him. Luckily, he says, a member of Mayor Klitschko’s team was on hand to rescue him and accept his project presentation. Within a few weeks, he was back at the mayor’s office to receive the full backing of the Klitschko administration. The result was the CityArt project, which brought world-renowned artists to Kyiv throughout 2015 to create 20 giant mural paintings.

The support of Kyiv City Council has been vital to the success of Geo’s mural endeavors, but he is at pains to point out that no budget money has gone into his projects. Instead, city officials provide the necessary permits while private sponsors finance the actual painting process. Recruiting mural artists has proved surprisingly easy. “The first is the hardest. Once you’ve got one big name, the others are much more inclined to get involved,” Geo explains. In the semi-underground world of monumental mural painting, contemporary Kyiv has a certain fashionable appeal thanks to its associations with revolution and geopolitical upheaval, making it a relatively easy sell. Some of the biggest names in the global mural scene have been eager to add a Kyiv creation to their portfolios, receiving basic expenses and kudos in return for their efforts.

Artists from Spain, Mexico, Australia, Italy and Argentina have already taken part in the CityArt project, but Geo now wants to take the Ukrainian mural movement to an entirely new level. His vision is for a massive global art project involving 200 murals in over 40 countries. Ukraine will be the centre of the project, with 80 murals planned for Kyiv over the next two years and a further 20 in regional cities such as Lviv, Odesa, Dnipropetrovsk, and Kharkiv. There is even talk of taking the initiative to the Ukrainian side of the Donbas frontlines, although Geo is tightlipped over exactly where.

These Ukrainian works of street art will be part of a broader global initiative dubbed ArtUnitedUs and involving dozens of countries. The  link connecting all these murals will be the overriding theme of world peace. Geo explains that while it is impossible to tell mural artists exactly what to paint, he usually provides general guidelines. For example, the works that made up the CityArt project in Kyiv sought to avoid politics, sex, violence and depressing themes. On the whole, the project succeeded in sticking within these guidelines – although Geo recalls one babushka who objected to the appearance of a giant Lesya Ukrainka on her building and demanded a portrait of Lenin instead.

Financing the project is challenging. Geo says over the past year he has been inundated with corporate sponsorship offers, but recognizes that adding logos and brand names to his monumental murals would undermine the essence of the entire project. Instead, he relies on contributions from people who want to give something back to Kyiv. A single mural costs around USD 3,000-4,000 to finance, making this a relatively cheap way to leave your mark on the city landscape. In return, sponsors receive recognition in the form of a small plaque on the mural they financed. “I see it as a present to the city,” he explains. “Personally, I want to do something that will resonate long into the future.”