Beyond the borsch: how Kyiv’s vibrant and increasingly inventive dining scene is helping the Ukrainian capital gain a reputation as the most exciting new gastronomic destination in Eastern Europe 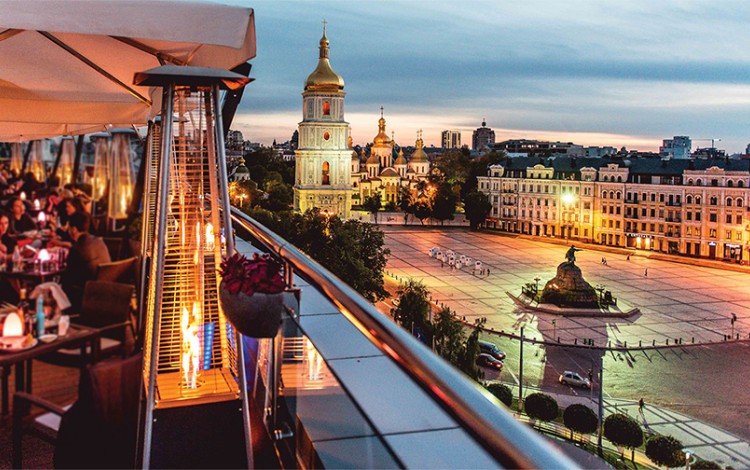 As Kyiv’s international profile continues to rise, the impressive dining out scene in the Ukrainian capital is starting to receive the kind of recognition it deserves. Whereas tourism articles about the city once limited their gastronomic commentaries to descriptions of salo, borsch and other traditional staples of Ukrainian cuisine, travel writers now routinely gush over everything from the eclectic range of venues on offer, to the stylish interiors and slick dish presentation that are now commonplace in Kyiv restaurants.

This enthusiasm is hardly surprising. The Kyiv restaurant industry has undergone a comprehensive upgrade in recent years, marking a generational shift away from the garish ostentation of the post-Soviet era as Ukraine’s biggest city has embraced its New Europe credentials in the wake of the 2014 Revolution of Dignity.

Today’s vibrant Kyiv restaurant industry is a long way away from the limited dining out options on offer during the early years of independence. Throughout the 1990s, the Ukrainian capital boasted only a handful of plausible venues, most of which were well beyond the budgets of all but the wealthy few. Restaurant interiors often reflected this elitism, with an excess of palatial flourishes and gold trimmings seemingly designed to overawe diners. Despite the high price tag, service standards were often comically bad, with inattentive waiters and a lack of customer care the rule rather than the exception. These modest beginnings make today’s world-beating scene all the more impressive. Indeed, the recent reinvention of Kyiv’s restaurant sector reflects the dramatic changes taking place in Ukrainian society as a whole.

As Chairman of The Ukrainian Connoisseurs Club (TUCC), British expat and longtime Kyiv resident Terry Pickard has observed the transformation of the city’s restaurant industry up close. He has been organizing regular TUCC dinners at top Kyiv restaurants for almost two decades and says the changes he has witnessed are little short of remarkable. “When TUCC first began rating restaurants seventeen years ago, there were probably only half a dozen that could be considered good quality. Now there are well over fifty,” he reflects.

Pickard identifies three key factors behind the improvements in Kyiv’s dining out options: better service, greater culinary diversity, and the emergence of a new generation of Ukrainian chefs with the skills and creative confidence to complete on equal terms with their international peers. “It is no longer imperative for a Kyiv restaurant to hire a foreign chef in order to be successful. Many of TUCC’s mostly highly-rated venues have excellent Ukrainian chefs instead,” he observes. “The standard of waiting staff has also improved tremendously. They now typically receive training and obviously take pride in their profession. Ladies are served first, etiquette rules are followed, and it is quite amazing how many service personnel have good English-language skills.” This has resulted in a restaurant scene that offers excellent quality at highly competitive rates. “You can enjoy a superb dining out experience in today’s Kyiv and it will only cost you half the price of London,” says Pickard.

Fellow Brit Sam Kearley is also a veteran of the Kyiv dining out scene. As co-founder of The Big Meet social community, for the past few years he has regularly hosted networking evenings at many of the newest venues to open in the Ukrainian capital. Kearley says one of the most striking improvements has been the increasing diversity of the city’s restaurant selection. “While there was no shortage of good dining out venues five years ago, today there is a positive abundance of world-class restaurants in Kyiv. Whether you are in the mood for some national Ukrainian cuisine with a fusion twist, seafood fresh from Nordic waters, or aged steaks, the city now has most bases covered.”

Kearley also points to the positive contribution made by expatriate restaurateurs, who he credits with adding to the dining diversity of the Ukrainian capital by opening up new venues offering oriental menus. “While Ukrainians are not typically fans of spicy food, many of the restaurants opened by expats have become clear favorites among the international community in Kyiv,” he notes.