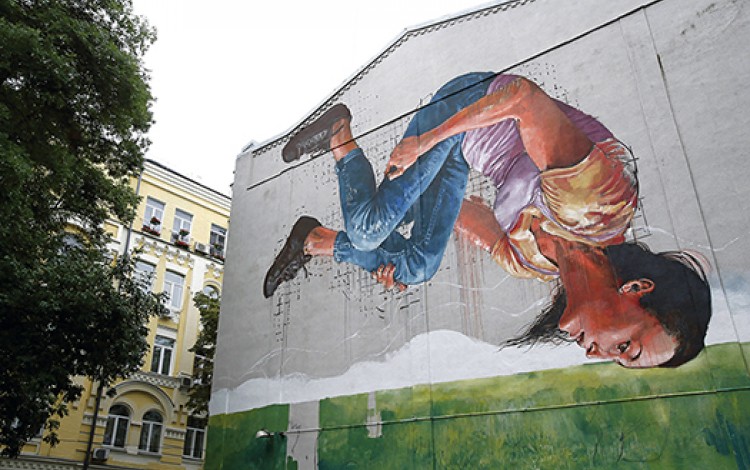 Two years since the outbreak of the Euromaidan protest movement, has Ukraine actually moved any closer to the rest of Europe? On the geopolitical level, the signing of the EU-Ukraine Association Agreement has brought the relationship between Ukraine and the EU to an entirely new level. Meanwhile, on the national level there is less concrete evidence of a decisive shift towards European values, with ambitious reform commitments sitting uneasily alongside attempts to maintain the corrupt old status quo.

Signs of the emergence of a new, European Ukraine are easiest to identify at street level – especially in Kyiv itself. Civil society is thriving, with a cult of volunteerism making itself felt in every sphere of life from defence and central government to human rights and support for the country’s internally displaced population. The Ukrainian capital has also witnessed an explosion of hipster hangouts over the past two years, as the ostentatious opulence of post-Soviet chic has given way to a brand of bearded Bohemianism that is culturally far closer to Berlin than Moscow. Beyond the beards, perhaps the most visible indication of this growing Europeanization has been the ever-expanding array of contemporary street art creations that currently decorate Kyiv’s Soviet-era architecture.

Since the fall of the Yanukovych government in February 2014, the Ukrainian capital has become a giant canvas for a dizzying ensemble of street artists including local talent and many of the biggest names on the global street art scene. Some artists have sought to capture the mood of national awakening that has gripped Ukraine since the Euromaidan Revolution, while others have attempted to inspire the public with more apolitical creations. Painting styles have generally been contemporary, with Ukrainian folk motifs featuring heavily.

The pictures they have produced stand in stark contrast to the Soviet-era practice of decorating buildings with giant Communist Party slogans in praise of the proletariat. Instead, the emphasis is now firmly on free artistic expression and individuality. Kyiv’s once drab Soviet facades have been transformed into platforms for creativity and colour, generating a contemporary feel that sits surprisingly well with the Ukrainian capital’s ancient aura.

This ongoing flurry of artistic activity has already resulted in a collection of monumental street art capable of rivalling anything Eastern Europe has to offer. It is a collective achievement involving artists, activists, building owners and enthusiastic city officials. Such public-private sector creative cooperation would have been significantly more difficult during the post-Soviet years, when a ‘can’t do’ mindset dominated thinking and fostered an instinctive fear of change among many state officials.

The growth of street art is one specific area where Kyiv Mayor Vitaliy Klitschko has been able to make his mark on the Ukrainian capital and live up to his billing as a ‘European Mayor’. The former boxing world heavyweight champion has offered his support for a series of Kyiv murals and personally welcomed international artists to the city.

Mayor Klitschko has cooperated with numerous activists involved in the growth of street art in Kyiv. One of the most active groups is the CityArt initiative, which is backed by Klitschko as well as being supported by a number of private donors. CityArt project producer Anastasia Drizo says the recent fashion for monumental street art is part of broader efforts to transform Kyiv into a modern European capital capable of rivalling more established cultural centres inside the EU. “We want Kyiv to be just as interesting for tourists as cities like Prague, Paris and Barcelona. Contemporary street art is a great way to transform old buildings and brighten up the city centre. It has the potential to stimulate people intellectually and broaden horizons,” she explains, adding the CityArt initiative is guided by the slogan ‘In Art We Trust’.

Despite receiving a number of requests from the owners of recently constructed buildings, Ms. Drizo explains that only drab and dilapidated buildings are selected for CityArt projects. Ukrainian and international artists are then invited to produce artworks at selected sites, with global street art aristocrats such as Australians Fintan Magee and Guido van Helten among the many to have added to Kyiv’s open-air art exhibition over the past year. Activists provide the artists with space for their creations, but the themes of the pictures are generally left up to the artists themselves. “Street artists are not commercially driven. You cannot hold tenders among them or ask them to work to order,” explains Ms. Drizo.

Ultimately, Ms. Drizo hopes to be able to offer tours of Kyiv street art as part of the standard tourist package. Kyiv has long had a wealth of historic landmarks for visitors to explore, but the advent of the street art phenomenon in the Ukrainian capital has added a contemporary twist to the traditional tourist trail. She sees the growing number of murals as part of the move towards a more European urban environment, and is confident it will help attract visitors while also making them feel more at home in the city. “Street art is a short cut to the modern European mentality,’’ Ms. Drizo concludes.