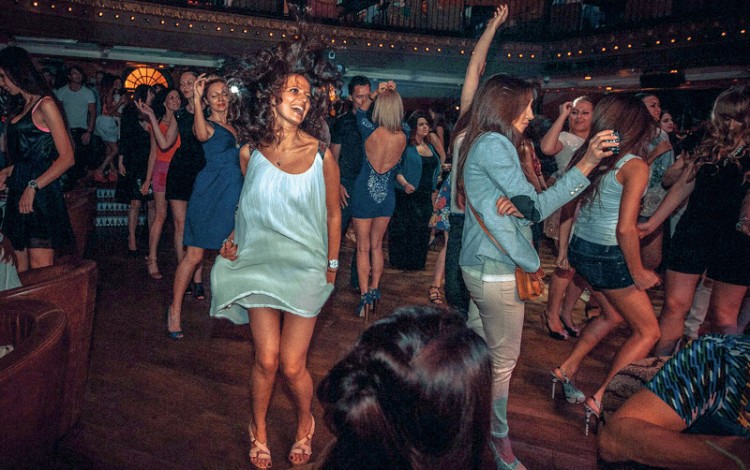 The nightlife scene in the Ukrainian capital has undergone a dramatic transformation in recent years. As Ukrainian cultural compasses have swung away from Moscow and towards Europe, the old post-Soviet ambience of ostentatious oligarch chic has given way to bearded and tattooed pop-up appeal. Despite the economic challenges facing the country, new venues appear in Kyiv on a weekly basis, imbuing the capital city with a vibrant and transient feel that fits well with the post-revolutionary mood dominating broader Ukrainian society.

Amid all this nightlife change, one thing remains the same. Kyiv’s Caribbean Club. The Caribbean, as the venue is affectionately known to regulars, has recently celebrated its eighteen birthday – a staggering landmark by Ukrainian standards. This year’s colourful anniversary celebrations where overseen by club director Igor Ilyuk, who has been with the venue since the early days. He has witnessed, and initiated, significant development of the Caribbean Club since it first opened its doors in the second half of the 1990s. Back then, the Caribbean was a small, one-room affair relying largely on word of mouth to pull in crowds of weekend revelers. It proved an instant hit, attracting an eclectic collection of diplomats, expats, international students, local party people and lovers of all things Latino.

At the time, nocturnal Kyiv was a place of extremely limited leisure options. Many nightlife venues were essentially either casinos or brothels, or combinations of the two. The Caribbean Club offered something completely different – a democratic environment where the expat and local crowds could rub shoulders without rubbing each other up the wrong way. It was a place where single girls could enjoy a night of dancing without having to face crude propositions, and where ethnic minorities did not have to worry about problems with racist thugs. Foreign football stars would shimmy alongside ambassadors and undergraduates.

Over the intervening eighteen years, the Caribbean has grown and expanded into a vast two-storey nightlife emporium that the venue’s early devotees would no longer recognize. Nevertheless, it has remained refreshingly true to its democratic roots. Today’s Caribbean now offers VIP dining and boasts an impressively large stage area for regular live music performances. In the original Caribbean, there was barely room for the DJ booth. The one thing about the venue that has not changed is the unmistakable energy on the dance floor. Seasoned salsa enthusiasts and tango novices alike can find their feet at the Caribbean, with a non-judgmental approach to skill levels helping even the most awkward of performers lose their inhibitions. The club has attracted an array of twinkle-toed regulars over the years who love nothing better than to dazzle audiences with their perfectly polished dance moves, but newcomers will soon find that the Caribbean dance floor is not only for advanced performers.

This friendly vibe is one of the reasons for the Caribbean Club’s enduring success. It has helped the venue attract a loyal following and has made it a home from home for many in Kyiv’s international community. At a time when everything in the Ukrainian capital seems to be changing at a rapid pace, the Caribbean remains a fun and welcoming venue that proves some things never go out of style.