The Modern Art of Metallurgy 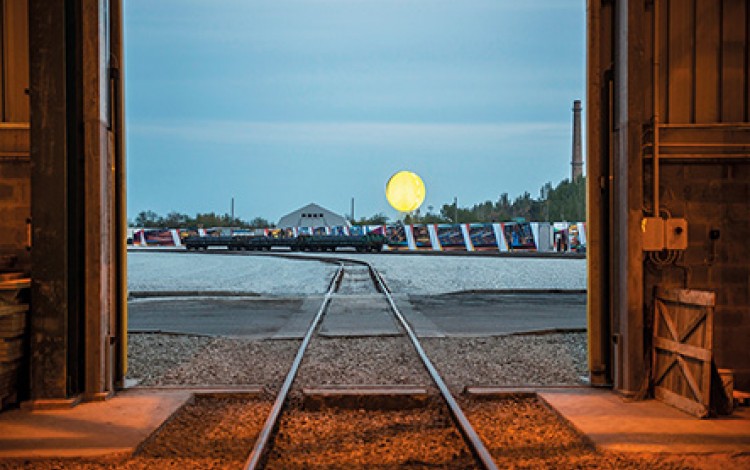 As evening settles across Dnipro, the city’s most striking landmark is a novel artificial sun blazing across the river from the Left Bank. This unusual installation is the calling card of Dnipro’s Interpipe Steel electric steel melting complex, where cutting-edge production combines with contemporary arts to create one of the world’s most innovative and original industrial facilities.

Completed in 2012, it is the first metallurgical plant to be built from scratch in Ukraine for 40 years. With a total financial outlay of USD 700 million, it is also the largest single private investment in the country since the dawn of Ukrainian independence in 1991. Production capacity at the mill is 1.32 million tons per year, making it the largest enterprise of its kind in Eastern Europe. In 2016, in-house steel production reached 614,000 tons.

Interpipe Steel is widely recognized as the most eco-friendly metallurgical mill ever built in Dnipro. It marks a striking departure from the ecological issues associated with the industrial infrastructure inherited by Ukraine from the Soviet Union. Before the launch of the complex, Interpipe had used open-hearth technology to provide a part of its facilities with steel billets. The new steel mill’s state-of-the-art equipment and green technology have now enabled Interpipe to replace outdated open-hearth steel production. This has cut energy consumption per ton of steel by more than half and dramatically reduced emissions.

The plant’s gas collection and purification system features ecologically safe technologies designed to reduce the dust content in emissions. The mill has also been equipped with a unique water supply system. Engineering solutions applied at the design phase of the construction project have made it possible to create a completely closed circulating water supply system without any industrial waste discharge into the Dnipro River and other local waterways. Electricity comes to the plant via an ecologically safe cable running underground to minimize impact on the surrounding environment.

In order to limit noise pollution from the scrap melting process, the plant’s arc steel-melting furnace has had a special protective cover installed (in metallurgical terminology a “Doghouse”). This cover ensures comprehensive noise insulation and keeps noise levels at the legally established norm of 45 decibels after dark and 55 decibels during the daytime.

This green approach has helped to attract a new generation of young and qualified metallurgy professionals to work at the mill, with up to ten applications for every vacancy. Interpipe Steel has also created a working environment that mirrors the most progressive global trends. Smoking is prohibited anywhere on the grounds of the mill. The plant control post has had breathalyzers and metal detectors installed. Employees cannot use cell phones in the workshops. Meanwhile, the facilities provided for mill employees are far beyond anything envisaged at many of Ukraine’s older industrial giants. Personal service rooms feature an innovative zoning system, with space divided into home clothes zone, hygiene zone, and working clothes zone. Every employee has an individual locker for his or her personal belongings, and receives three sets of uniforms maintained by the company.

This innovative attitude towards ecological issues and production culture makes the mill exceptional, but the giant artworks around the plant are what really capture the imagination. The team behind Interpipe Steel see the arrival of the mill as a milestone in the industrial and cultural history of post-Soviet Ukraine. For Dnipro residents, the opening of the mill meant the appearance of a series of new landmarks – Danish-Icelandic artist Olafur Eliasson’s “Dnipropetrovsk Sunrise” ensemble. This giant contemporary art project consists of five large-scale works conceived by the artist as an integral part of the mill. The centerpiece “Sunrise” is meant to serve as a metaphor for the industrial renaissance of Ukraine.

Interpipe founder Victor Pinchuk, who is well known as a patron on the contemporary arts, sees the mill as a way of artistically honoring Dnipro’s grand metallurgical traditions. “When we first thought about the construction of a new mill, we had a dream – to create the most up-to-date metallurgical production facility in Ukraine. In the course of our work, we realized that we could do much more,” he says. “We eventually created a mill that combines innovative technologies and production culture with contemporary art. This mill is the only one of its kind – a plant built for its workers, for the city, and for society. For me personally, the mill is also a tribute to generations of Ukrainian metallurgists.”

Artist Olafur Eliasson has a long history of creating larger-than-life sculptures and installations across the globe. He explains that the Interpipe Steel project was an interesting departure as it juxtaposed the creative impulse of contemporary art with the functionality inherent in any industrial production facility. “Art has the capacity to suggest visions, states of uncertainty, and new stimuli, whereas factories, to ensure smooth production, are of necessity governed primarily by order and predictability,” he explains. “I saw this commission as an invitation to co-develop a generous and welcoming environment; a setting where human values and needs come first, where a degree of unpredictability and aesthetic experience is embraced in the factory’s everyday life and in the city of Dnipro.”

Interpipe Steel hosts five major art objects created by Eliasson. “Dnipropetrovsk Sunrise” is a 60-metre-tall, freestanding sun. Made out of two intersecting yellow corrugated-metal ellipses supported by scaffolding, the sun is illuminated at dusk and dawn, making it visible from all points of the compass. It serves as one of the most iconic landmarks in Dnipro and stands out on the eastern horizon from across the river as a permanently rising sun.

“Your Thinking Bridge” is a twenty-two-meter-long installation that occupies the entire length of the elevated walkway inside the Interpipe Steel factory. The walls and ceiling of the enclosed bridge are covered with mirrors and metal. Two semi-spheres are attached to the mirrored surfaces at the juncture between the walls and ceilings, so that they appear as full spheres together with their reflections. Track lighting on the handrails and lights inside the spheres illuminate the passageway. The facing mirrors evoke an infinite space in which the spheres and the workers moving through the walkway are endlessly reflected.

“Your Time Tunnel” is an arched entrance large enough to encompass two lorries side by side. Your Time Tunnel consists of a series of arcs that form an impressive portal through which traffic flows into and out of the Interpipe Steel facility. Constructed from pipes produced at the factory, the elliptical and circular arcs derive from cross sections of a pipe taken at different angles. The appearance of the tunnel changes according to the vantage point from which it is viewed – whether you are inside or outside, moving or standing still. It cannot be grasped instantaneously as a single image, which makes the time it takes to view the shifting relationships of the circles and ellipses an important element in the work.

“Material of Movement” is located in the main hall of the factory. It comprises a series of circular and elliptical discs made of reflective yellow glass. Lights, installed in the gap between the discs and the wall, create a soft glow around the circumferences of the discs. Progressing from circle to ever more elongated ellipses, the two-dimensional shapes produce the illusion of a disc becoming foreshortened as it spins in space.

“Your Heat Mural” is a group of large-scale images displayed on the factory facade. The effect is reminiscent of a thermal analysis of the interior. At first glance, it seems to grant a view into the factory, except that it is not the actual contents of the building that are shown, but an abstract impression of what goes on inside, the invisible heat exuded by the manufacturing of steel.

The mill is a tourist attraction in its own right and is open for visitors. Anyone can sign up for a tour online and explore the largest electric steel-melting complex in Eastern Europe. While touring the mill, visitors are offered insights into the construction history of the mill, while also learning about its eco-friendly technologies and admiring the world class masterpieces of contemporary art on display.