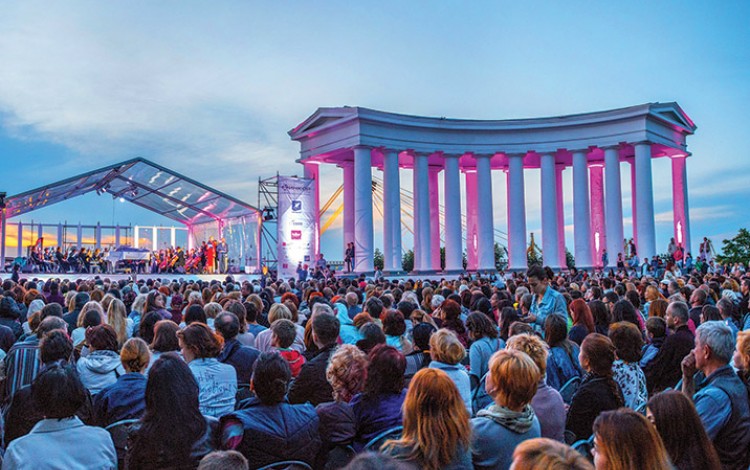 Ukrainian classical pianist Alexey Botvinov is an infectiously enthusiastic character who seems curiously immune to the default pessimism more commonly associated with many of his compatriots. “They say that the phrase “may you live in interesting times” is actually an ironic curse, but I never saw it that way. I even enjoyed Perestroika,” he quips. That this sunny disposition has survived the traumas of the post-Soviet years is in large part thanks to the endless inspiration Botvinov draws from his home city of Odesa.

After completing his musical education in the twilight of the Soviet era, he joined the early 1990s exodus of classical performers fleeing the wreckage of the USSR. However, after a few years of comfortable exile in Dusseldorf, his nostalgia for Odesa proved too strong and Botvinov returned home. “Cultural life in the early years of Ukrainian independence reached rock bottom, with empty theatres and dangerous streets that even made it difficult to attend events, but I felt that I simply had to renew my connection with Odesa. This connection makes me strong and inspires me.”

Botvinov has remained in Odesa ever since, using the city as a base from which to continue his global touring schedule at some of the world’s most prestigious classical music festivals. Over the intervening two decades, Botvinov’s love affair with the Black Sea port city has shown no signs of waning. On the contrary, the pianist is now trying to repay his hometown by putting Odesa firmly back on the European cultural map.

Since 2015, Botvinov has been the driving force behind the annual Odessa Classics festival, which takes place at venues across the city in early June. Currently in its fourth year, the festival has expanded from an initial four-day schedule to become a ten-day extravaganza. The list of performers has also grown impressively, with superstars like Israeli violinist Maxim Vengerov set to headline at this year’s festival. Other highlights include a gala concert by the Berlin Chamber Orchestra on Odesa’s iconic Potemkin Steps.

The idea for the festival first came to Botvinov in summer 2014 when Ukraine’s future as an independent state appeared to be in grave danger. Russian hybrid forces were seizing towns and cities across eastern Ukraine and efforts were underway to destabilize Odesa itself. “Those were the darkest hours for our nation,” he recalls. “As events unfolded, I found myself asking what I could do for my country.” He decided that his most meaningful contribution would be to establish a classical music festival capable of promoting Odesa and portraying Ukraine in a positive light internationally.

Given the military emergency in the country at the time, cultural diplomacy was not high on the agenda. Indeed, he chuckles as he recalls the difficulties he faced when trying to enlist the support of the municipal authorities. Ultimately, the inaugural festival was only possible thanks to Botvinov’s own personal contacts within the world of classical music, together with the magical allure of Odesa itself. “The Odesa branding was crucial,” he admits. “If I’d come to many of the musicians with a proposal to perform in Kyiv, there is a good chance that they would have said “thanks, but unfortunately I am busy.” When the invitation is for Odesa, people are more inclined to make room in their schedules.”

Odesa’s continued pulling power in classical music circles may come as a surprise to observers more familiar with accounts of Ukraine’s impoverished arts scene. Botvinov says this is a legacy of the city’s rich cultural heritage, together with the many famous performers who spent their formative years in Odesa before going on to become major international stars. “Every violinist in the world knows Odesa and regards it with a sense of awe because it features in the biographies of some many legendary performers. This gives us a wonderful foundation to build on.”

Botvinov hopes that the festival will help to improve outside perceptions of Ukraine while also raising Odesa’s international profile. Looking back at the reaction to the first festival in 2015, he recalls the impact of coverage in the Russian media, which was then at the height of its “fascist Ukraine” propaganda offensive. “All those articles and reports about the dynamic cultural life of Odesa came as quite a surprise to Russian audiences who were then being encouraged to believe the country was spiraling into extremist chaos. The impression created was more powerful than any political speech.”

He also sees the festival as a way of promoting Odesa as an international tourist destination while demonstrating that the city has much to offer in addition to its legendary nightlife. “We already have a lot of tourists coming to Odesa to party, but my goal is to boost cultural tourism. There is so much more to Odesa than beaches and carousing. This city has enough of a classical music heritage to serve as one of the cultural capitals of Eastern Europe. Tourists should come for the culture. If they like, they can go to a nightclub afterwards.”