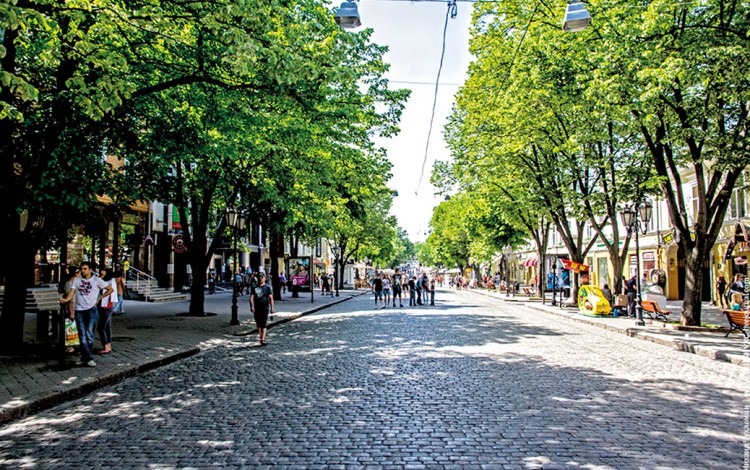 Ukraine’s most celebrated street is undoubtedly Odesa’s central strolling strip, Deribasivska Street. It is an elegant, cobble-stoned pedestrian magnet for tourists and locals alike, a fashionable boulevard where people come to see and be seen. The street is a landmark in its own right and one of Odesa’s key attractions. It is also the most prominent reminder of the Spanish role in the foundation of Ukraine’s cosmopolitan Black Sea capital.

The Spanish founder of Odesa

Deribasivska Street is named after Jose de Ribas y Boyons (1749-1800), an aristocratic Spanish officer and adventurer who served as one of the most trusted generals of Russian Empress Catherine the Great. The son of the Spanish Consul to the Kingdom of Naples, Jose de Ribas joined the Imperial Russian Army in 1772 as an ambitious 23-year-old. It was to prove a good career move. He would eventually play an instrumental role in the military campaigns to wrest much of modern Ukraine from Ottoman hands at the end of the eighteenth century, before going on to serve as one of the principle architects of Odesa.

Jose de Ribas was both a victorious admiral and a gifted general who won a series of sea battles and led his Cossack troops to victory at the legendary sieges of Ochakov and Izmail, pushing the borders of the Tsarist Empire all the way to the Danube. But it is predominantly as a builder that Jose de Ribas is today remembered. He is widely acknowledged as the founder of Odesa and the first in a long line of foreign administrators to shape the evolution of the city. Jose de Ribas is credited with first giving Catherine the Great the idea of building a port city on the site of Khadjibey, the Ottoman garrison town he had captured without a fight during the Russian imperial conquest of Ukraine’s Black Sea coastal regions. The Empress accepted his proposal and appointed him chief administrator of the project. The foundation of Odesa was to be his ultimate legacy, overshadowing his many military triumphs. In one of the two statues dedicated to him in today’s Odesa, he appears as builder and town planner, with a spade in one hand and a plan of the future metropolis in the other.

Odessa not only owes its current form and typically Spanish checkboard street layout to its first governor, Jose de Ribas, but also its elegant Central City Garden, originally designed by Jose and his brother Felix before being donated to the city by the latter in 1806. However, the most fitting homage to Jose de Ribas is the iconic street dedicated to him in central Odesa. It is surely appropriate that this bustling, strangely Mediterranean street, lined with hotels, boutiques, restaurants and outdoor cafe terraces, acknowledges one of Spain’s greatest contributions to the making of modern Ukraine.

It may come as a surprise to learn that members of the De Ribas family still live in today’s Odesa, maintaining family ties to the city their illustrious ancestor helped create. You might even bump into one of them while taking a stroll on Deribasivska Street, which continues to serve as the focal point of Odesa city life and testament to the vision of the Spanish aristocrat who started it all.

About the author: Dr. Iago Gil Aguado is Deputy Head of Mission at the Spanish Embassy in Ukraine