The Russian leader has reversed the long-standing Kremlin policy of blanket denials and admitted to a limited Russian military role in east Ukraine. Putin's comments directly contradict months of indignant Russian denials over the role of Kremlin troops in the Ukraine conflict, despite mountains of evidence pointing to deployment of Russian armed forces. 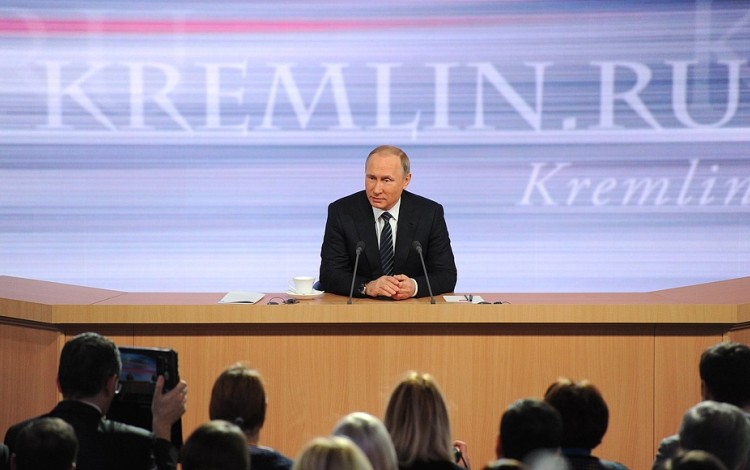 After 18 months of blanket denials, Russian President Vladimir Putin used his 17 December annual press conference in Moscow to change the official Kremlin narrative on Russian military involvement in Ukraine. Responding to a question about Russian troops in the east Ukraine combat zone, Putin declared, “We never said there weren’t people there (in east Ukraine) carrying out certain tasks, including of a military nature.” This important if somewhat ambiguous disclosure suggests the Kremlin is moving towards a new position on Ukraine and is seeking to distance itself from the denials of the past year and a half.

Putin’s comments did not provide a full and detailed account of the scale of Russian military involvement in east Ukraine - instead, he sought to differentiate between the presence of limited numbers of troops with specific tasks and large-scale deployments of regular army units. Nevertheless, these comments mark a clear departure from the long-held position of complete and utter denial. Putin has personally, directly, and unambiguously denied the presence of all Russian military personnel in east Ukraine on numerous occasions, as have a wide range of leading Kremlin figures. The fact that the Russian leader is now apparently denying these denials would suggest a transition towards recognition of a limited Russian military role in east Ukraine.

Crimean denials give way to boasts

The Kremlin initially adopted a similar stance over Crimea. In March 2014, as the takeover of the Ukrainian peninsula unfolded, President Putin furiously denied that Russian troops were in any way involved. In his most infamous comments on the subject, the Russian leader said the unidentified military forces seizing control of Crimea were merely local volunteer militias who had purchased their Russian army weapons and uniforms in Crimean shops.

Once the annexation of Crimea was complete, the official Kremlin narrative was updated to include a secondary support role for Russian troops. By the time of the first anniversary of the annexation in March 2015, Putin was boasting that he had personally given the order to seize Crimea. In a Russian documentary marking the anniversary entitled ‘Crimea – Homeward Bound’, Putin admitted to ordering his security forces to ‘return Crimea to Russia’ in late February 2014 – over three weeks before the internationally unrecognized referendum used by the Kremlin to justify annexation. “Our advantage was that I was personally dealing with it,” Putin said of the Crimean invasion. This remarkable change of narrative was possible thanks to the success of the Crimea takeover. With the Ukrainian peninsula under the complete control of Russian occupation forces, it seemed relatively safe for Putin to admit the role played by the Russian military.

The situation in east Ukraine remains far less straightforward. Russian ambitions to seize up to eight Ukrainian oblasts (administrative regions) with a combined population of almost 20 million have failed to materialize despite eighteen months of hostilities. Instead, Kremlin-backed forces have found themselves bogged down in an enclave encompassing less than half of just two oblasts – Donetsk and Luhansk. This failure to secure a decisive victory in east Ukraine has made it politically necessary to continue denying a Russian military role in the conflict.

Why has the Kremlin suddenly decided to change its position and admit to a limited Russian troop presence in east Ukraine? One possible reason could be the sheer weight of evidence pointing to direct Russian military involvement. This evidence includes first-hand accounts provided by captured Russian soldiers and Russian veterans of the conflict, investigative work by Western journalists using everything from analysis of weaponry to social media posts by Russian soldiers, eyewitness accounts of military convoys crossing the border, statements by the separatist leaders themselves, and reports from inside Russia of mysterious military deaths and unmarked graves. In an apparent bid to maintain the credibility of the Kremlin’s denials, Putin introduced a new law in early 2015 criminalizing reports of peacetime military deaths. It would appear this policy has now been revised to allow for acknowledgement of a limited Russian military presence. This is a major strategic switch by the Kremlin. What it means for Ukraine is unclear, but it confirms what most international observers have suspected for the past eighteen months – namely that Russia has been lying about its involvement in the Ukraine conflict from the very beginning.