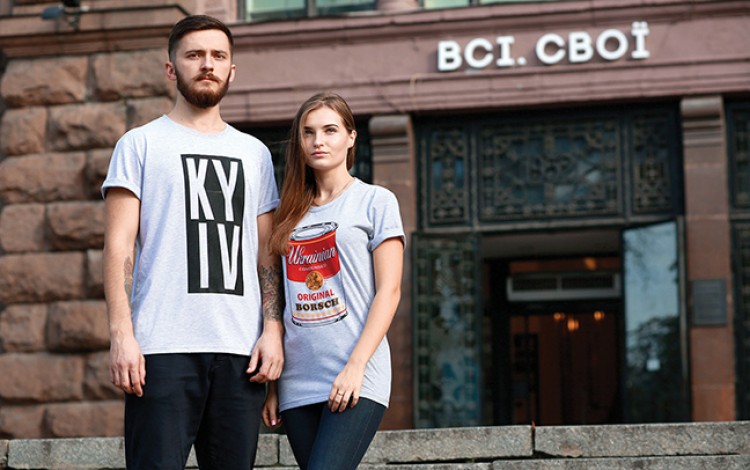 The opening of ‘Vsi. Svoi’ (literally ‘All. Ours’) department store in downtown Kyiv in mid-September generated major media buzz. The store, which stocks the wares of 150 Ukrainian clothing, shoe and accessories designers, was a focus of attention for Ukrainian mainstream media and social media alike, highlighting the current wave of interest in the domestic fashion scene. This enthusiasm has translated into something of a consumer bonanza for Vsi. Svoi, with many of the store’s brands rushing to restock their outlets on a daily basis as limited stocks of previously niche products sold out in record time.

Many commentators have attributed the current craze for Ukrainian fashion brands as a product of two key factors: the wave of post-Euromaidan patriotism that has gripped Ukraine since 2014, and penny-pinching brought on by economic hardships and the sharp devaluation of the national currency. Vsi. Svoi founder Anna Lukovkina believes there is much more to the trend, pointing to the high quality of Ukrainian fashion brands and the ability of local designers to respond rapidly to the ever-changing tastes of Ukrainian consumers. “In the immediate aftermath of Euromaidan there was a period when people would buy anything featuring patriotic symbols regardless of the quality, but this did not last long. The brands we sell are popular because they are fashionable, not merely because they are Ukrainian,” she says.

Lukovkina also sees the popularity of Ukrainian designers as a reflection of broader changes in Ukrainian society. She identifies a shift away from the passion for ostentatious international designer brands that dominated street-level Ukrainian fashion for much of the 1990s and 2000s. “Wearing Ukrainian brands has become stylish and aspirational. People are now more interested in originality and subtlety than showing off expensive labels.” Nevertheless, the location of this homage to contemporary Ukrainian fashion is impressively upmarket. Vsi. Svoi is housed in one of the imposing and majestic Stalinist buildings lining Kyiv’s Khreschatyk Street – the most exclusive retail real estate in the Ukrainian capital.

Inside, the store offers a dizzying array of items set out over three floors. Thick winter knitwear and iconic pop art T-shirts line up alongside funky hats, leather bags, lingerie, shoes and all manner of accessories. The brands present in the store come from across Ukraine. Around fifty percent are Kyiv-based, with major regional capitals like Odesa, Kharkiv, Lviv and Dnipro each accounting for half a dozen designers each. Prices are relatively competitive when compared to many of the major international fashion brands, but this is not a destination for bargain hunters or budget dressers. Instead, during its first weeks in business, the store attracted a steady stream of stylishly attired young ladies, members of Kyiv’s burgeoning hipster community, and a significant contingent of expats and tourists.

The backstory behind this Ukrainian fashion phenomenon is a tale straight out of startup central casting. Like so many stories of entrepreneurial success in post-Euromaidan Ukraine, it all began with a post on Facebook. 32-year-old Lukovkina recalls how she initially set up a page on social media in early 2015 in a somewhat speculative bid to bring together the many local designers who were then plying their trade in relative isolation. The response was immediate and emphatic, leading to the creation of monthly fashion markets at the D12 Gallery in central Kyiv. These events grew at such a pace that she soon introduced additional markets focusing on home décor, Ukrainian gastronomy, and locally produced items for children.

The popularity of these fashion fairs inevitably attracted the attention of established retail industry players, leading to an invitation to set up the new department store now standing on Kyiv’s central strip. Just over a year after first setting out on her fashion odyssey, Lukovkina began drawing up plans for an entire department store. The rapid expansion of the Vsi. Svoi brand has been a veritable rags to riches rollercoaster that speaks volumes about the kind of opportunities in the new Ukraine for ambitious entrepreneurs prepared to think outside of the box. Lukovkina says she can still vividly recall the hardships she faced during the economic shocks of early 2014, when she regularly struggled to fill her car with petrol. She now finds herself overseeing a booming fashion empire at one of Ukraine’s most exclusive addresses, and is already working on a concept for online sales with a view to launching a website operation in early 2017.

Vsi. Svoi has managed to grow without the support of any major investors. One of the secrets of Lukovkina’s success is her previous career as an events manager. Years of organizing everything from business forums to rock concerts helped her establish a professional network of colleagues who were prepared to provide essential materials such as furniture and flyers without demanding prepayment. This helped get the initial concept off the ground, paving the way for today’s empire building ambitions.

There is now a significant waiting list of Ukrainian fashion designers looking to join the Vsi. Svoi success story. Lukovkina has 500 brands currently queuing up, but says she is cautious of over-extending her resources or exhausting her market by growing too rapidly. This over-supply raises the question of where all these designers were before Lukovkina began her efforts to gather them under a single roof. Some are relative newcomers to the industry, having gone into retail production since 2014. However, others have been in business for many years or even decades. Most had previously worked from their own showrooms, boutiques or apartments. Lukovkina says the quality was always there, but explains that many small-scale brands lacked business models or the ability to market themselves. This continues to be problem for Vsi. Svoi, with many of the participating designers struggling to bring the necessary business savvy to accompany their undoubtedly talents. “We are dealing with a lot of very creative people who may not always have the necessary professional skills,” she says. “Our goal is to take the industry to the next level of professionalism. We want to help designers turn the creative process into a business.”