Based on resources and pedigree, Ukraine should theoretically be an international footballing powerhouse. Instead, the Ukrainian national side has been disappointing for decades. Can the appointment of former star player and complete novice coach Andriy Shevchenko as the new national team manager reverse this depressing trend? 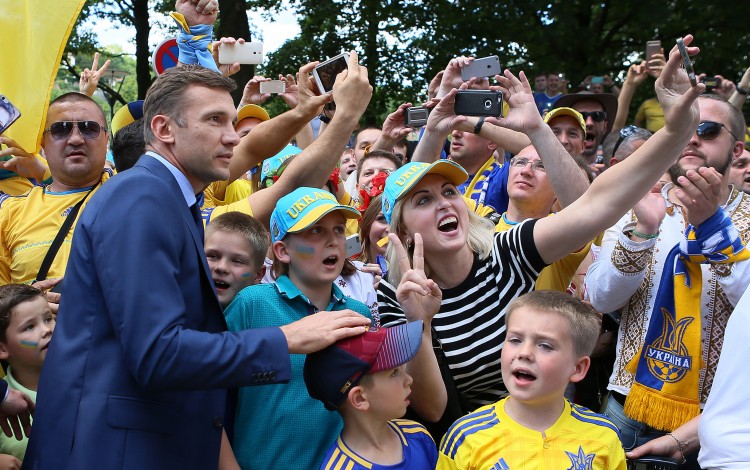 Ukrainian football icon Andriy Shevchenko is the most celebrated player in the country's history and arguably the most recognizable Ukrainian in the world. Nevertheless, his recent appointment as Ukrainian national team manager has raised eyebrows due to Shevchenko’s complete lack of prior management experience. Although he has played under some of the greatest coaches in modern world football, Shevchenko was never an obvious choice for football management. His undoubted gifts on the pitch were more of the God-given variety, while he never enjoyed a reputation as much of a tactician.

As he approaches his new task, Shevchenko can at least count on relatively low expectations. The former European Footballer of the Year took up his new position in late summer 2016 following the national side’s dismal showing at Euro 2016 in France. Even this was an improvement on previous campaigns – since entering international competition in 1996, the Ukraine team has only qualified for one European Championship and a solitary World Cup finals, despite being able to call upon many of the biggest stars in East European football.

Shevchenko began his reign without any major fireworks, securing an understated but credible 1-1 home draw against Iceland in the first match of Ukraine’s World Cup 2018 qualification campaign. His second game in charge is likely to be a tougher challenge – an early October visit to Turkey that could set the tone for the rest of the qualification campaign.

Will Shevchenko be able to get the best out of the notoriously underperforming Ukrainian national side? The ex-Dynamo Kyiv, Milan and Chelsea star spoke to Evgeny Kraws about his vision for the team and explained why he is unmoved by the criticism surrounding his appointment.

You played for some of the most legendary and successful managers in football history. What lessons have you learned in the art of management from each of the trainers you worked under as a player?

My experience with each of the individual coaches I worked with was always unique and often very complex. As a young player, (Dynamo Kyiv coach) Valeriy Lobanovskiy taught me the importance of attention to detail and consistency. Nothing was too small or minor in our preparations – everything counted towards getting the right result. In Italy, I was able to gain great tactical experience. Teams would often change their tactics and their formation several times during a single match. My time with Chelsea in England provided me with a better understanding of ‘playing for the supporters’. The passion of the fans is a very important and emotional element of British football.

What is your motivation behind accepting the role of Ukrainian national team manager?

Being Ukraine’s national team manager has been my dream ever since I stopped playing. For many years, the Ukraine team was a huge part of my life. I travelled all over the world with the team, contributed to its development, and took part in our biggest successes to date. I know this team inside out. The goal now is to utilize my experience in the manager’s role.

What is your response to those who question your appointment due to your lack of managerial experience?

Managing a club side and coaching the national team are very different things. My long career as a player in the national team are my qualification for the job. I know how this team works. I have also recruited a few very highly qualified professionals to join my coaching staff. We plan to restructure the entire national football team organization and create a more structured system incorporating all the different squads in the different age categories, so that when players finally make the breakthrough into the senior squad, they are familiar with our concepts and ready to meet our requirements.

By taking on the job of national team manager, you are opening yourself up to inevitable criticism if things do not go according to plan. Is there not a danger that you could tarnish your reputation as one of Ukraine's greatest football icons?

One of the most ambitious targets we have set ourselves is to develop a transparent and productive relationship between the national team, the fans, and the media. We will face relentless challenges and I hope we can go through it together. We have already introduced the concept of open training sessions prior to big games, where fans and the media can observe the team’s preparations. I will also be asking at least four players to talk to the press after every match – even if we lose. We cannot allow ourselves to lose sight of the fact that football is all about the fans. There is no other way of looking at it.

Ukraine's performance at Euro 2016 was extremely disappointing. Does the national team need a complete overhaul?

If we put our emotions to one side and look at Ukraine’s Euro 2016 performance clinically, the verdict we reach should not be so damning. The only complete failure was the game against Northern Ireland, when the team clearly failed to come up with any new ideas or rethink their approach to the match. This is a huge problem. It points to a lack of dialogue between the players and coaches. However, the games against Germany and Poland were interesting encounters full of exciting moments and examples of the kind of football the current Ukraine squad is capable of producing. Clearly, the results were unsatisfactory. However, Euro 2016 provided plenty of food for thought and room for constructive analysis.

Who do you see as Ukraine's toughest opponents in your World Cup 2018 qualification group?

Ukraine is in a very strong qualification group. Crucially, all the teams appear very evenly matched. There are bound to be plenty of surprise results during the qualification ties because there is so much quality. Four of the teams in the group played at Euro 2016 (Ukraine, Turkey, Croatia and Iceland). All of our opponents have well-established squads with consistent playing styles. This gives them an advantage over Ukraine because our squad is currently going through a period of inter-generational change. Restrictions on where we can host home games will also prevent us from playing in front of fans across the country. It is not clear whether we will be able to play in Kharkiv and Dnipro due to their proximity to the conflict zone in the Donbas. The Lviv Arena is also not an option due to sanctions imposed following crowd misconduct in 2013. This is obviously a disadvantage, but we will try to overcome all these obstacles together with our fans.

When you were playing for the national team, you always received a particularly warm welcome in Lviv. I can remember one occasion when you received a portrait painting depicting you as a medieval knight in armour. Whatever happened to that picture?

I am not a great collector of souvenirs but I do recall that painting! If I remember rightly, it is now at my mother’s house. Much of the memorabilia from my playing career is now on display in Milan, including my FIFA Ballon d’Or award and even a full-length statue. In terms of souvenirs, the only things I personally have are some photos given to me by friends. It makes no sense keeping that kind of thing locked away at home. I always try to put memorabilia on public display so fans can enjoy it. For example, I recently gave one of my national team shirts from Euro 2012 to the museum at the Olympiskiy National Sports Complex in Kyiv.

Footballers are notoriously superstitious. Did you have any lucky charms or develop any special routines during your playing career?

I don’t have any particular superstitions or lucky charms, but I do have certain rules I like to follow. I do not like being too light-hearted or jovial before a game. I have a strong sense of discipline and am a great believer in punctuality. I also find going through everyday routines automatically is a good way to focus my mind completely on work. These habits now serve as my expectations for the players as manager of the national team. I expect discipline, order, and punctuality.