Tailor to the Ukrainian elite 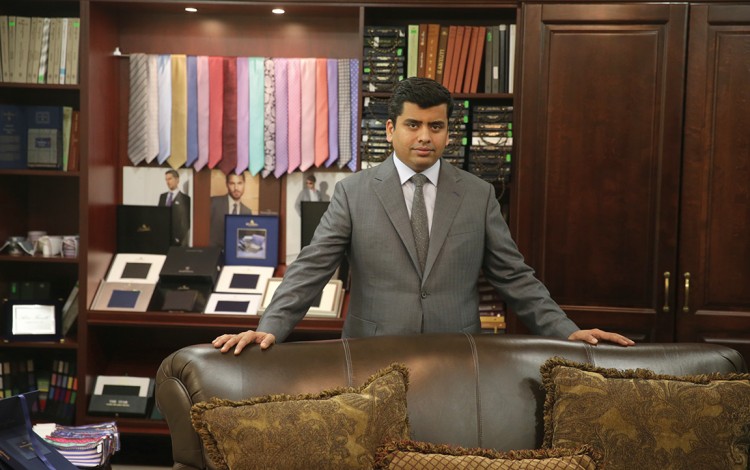 About the interviewee: Steve Kriplani is chief tailor and CEO at The Imperial Tailoring Co. Ukraine
Business Ukraine magazine

There was a time not so long ago when members of the Ukrainian business and political elite adhered to a dress code best described as “gangster chic”. Leather jackets and clunky jewelry were widely favored, with shiny pinstriped suits often accompanied by T-shirts or, if the occasion required a nod to formality, a turtleneck jumper. Over the past decade or so, this era of brash bling has given way to a far more businesslike approach to wardrobe issues. Imperial Tailoring Co. Ukraine CEO Steve Kriplani has observed this transformation with some satisfaction. His pleasure is more than the mere gratification of a man who understands the value of stylish attire. Mr. Kriplani’s tailoring business depends on continued demand for bespoke suits, and business is good.

“Crises tend to help our business,” he says. “The current economic difficulties in Ukraine have had the same effect as previous slumps in 1998 and 2008. Wealthy Ukrainians who previously overpaid for designer labels often come to us during hard times because they realize they can get suits made from the same materials and with higher quality tailoring at half the price. In many cases, they eventually end up bringing their old off-the-peg designer suits to us for alterations as well.”

Mr. Kriplani spoke to Business Ukraine magazine in the comfort of his cozy salon in Kyiv’s historic city center not far from Golden Gate. Plush leather interiors and dapper staff add to the old school ambience of what is one of Ukraine’s earliest post-Soviet fashion arrivals. The Indian-based Imperial Tailoring Co. first appeared in Kyiv in 1995 as part of a broad expansion throughout the CIS region. It is a family-run business begun in 1969 in Mumbai and now employing some 29 of Mr. Kriplani’s brothers and other relatives who manage a network spread across the post-Soviet world. Fittings take place on the spot, while tailoring work is handled at two company production units in England and Italy.

Mr. Kriplani himself has been in the Ukrainian capital for over a decade and says he has witnessed a striking evolution in local dress codes during his time in the country. “There have been big changes in the Ukrainian market. Clients today know what they want. They are generally much more knowledgeable and sophisticated when it comes to sartorial matters.” He puts these changes down to greater levels of international exposure as local elites have grown used to rubbing shoulders with their foreign counterparts. “Our Ukrainian clients have definitely become more familiar with global trends. They have also come to appreciate the golden rule that first impressions are lasting impressions.”

This growing Ukrainian appreciation for bespoke suits is reflected in the changing makeup of Mr. Kriplani’s client base. When the Imperial Tailoring Co. first began operations in Ukraine, its clientele came almost exclusively from the international community, with orders from diplomats and expat executives forming the bedrock of the business. Today, he estimates that around 80% of all clients are Ukrainians – mostly from the business and political communities. As well as hand-stitched, made-to-measure suits, this clientele will also soon be able to order bespoke leather footwear and tailor-made jeans. “We try to offer something new for our clients each calendar year,” offers Mr. Kriplani.

Despite his generous appraisal of the improving dress sense displayed by Ukraine’s high rollers, Mr. Kriplani says many of the country’s leaders are still guilty of more than their fair share of fashion crimes. While he diplomatically refuses to name names, the Indian-born and London-trained tailor argues that deep pockets are often not enough to overcome bad wardrobe choices. “Even now, some Ukrainian politicians are expensively dressed but inappropriately dressed. They continue to opt for things like light colors and patterned jackets when this is not at all in line with protocol.”

At a time when Ukraine is seeking to make the right impression internationally, Mr. Kriplani believes poor sartorial selections can have a negative impact on the country’s image. “Wearing an inappropriate suit sends out the wrong message about Ukraine,” he says. “This is unfortunate when all eyes are on Ukraine and people are making judgments about the country.” Nevertheless, he is confident the long-term trend towards elegant and internationally appropriate outfitting is irreversible. “Our company was always convinced of the huge potential for quality menswear in Ukraine,” he offers. “Our business is still growing and we expect this growth to continue.”