The Seven Wonders of Kyiv 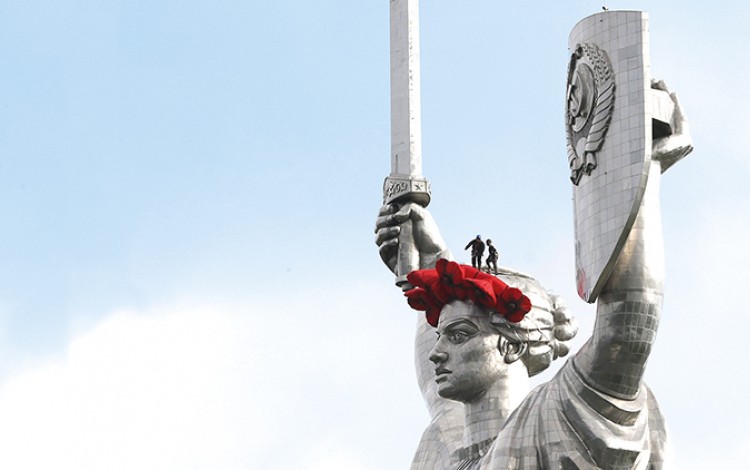 The Iron Lady of Ukraine: Kyiv's Motherland Monument is one of the largest statues in the world and marks the liberation of the Ukrainian capital from Nazi occupation during WWII
Susanna Dickinson, Business Ukraine magazine

The Ukrainian capital is not only Eastern Europe’s largest city – it is also arguably the most beautiful. This beauty, together with Kyiv’s strategic importance as a traditional gateway between the Eurasian landmass and continental Europe, have made it one of the most fought-over cities in the world. From Mongol Khans and Ottoman Sultans to German Emperors and Russian Tsars, many of history’s most powerful empires have coveted Kyiv, creating a legacy of conflict and foreign domination. In the last century alone, the city changed hands more than a dozen times in the immediate aftermath of the Bolshevik Revolution, and went on to become the biggest prize claimed by the Nazis during Hitler’s apocalyptic WWII invasion of the Soviet Union.

This turbulent past has not robbed Kyiv of its natural charm. Situated on rolling hills overlooking the majestic Dnipro River, today’s Kyiv is an elegant and rapidly expanding city that is thriving in its post-1991 role as a major European capital. It is fast earning a reputation as an attractive city break destination, with coverage generated by the 2017 Eurovision Song Contest expected to further boost Kyiv’s tourism profile. Guests of the city will find an excellent selection of hotels, restaurants, bars and clubs to accommodate and entertain them, along with a wide range of sightseeing options and attractions. If you are planning a visit, Business Ukraine magazine recommends finding time on your schedule for the following Seven Wonders of Kyiv.

Ukraine is currently attempting to remove the remaining relics of the Soviet era, but this mammoth Soviet monument remains the most iconic lady in Kyiv and will likely be around for many years to come. Built at the start of the 1980s, Kyiv’s Motherland Monument commemorates the Soviet liberation of the Ukrainian capital from Nazi occupation during WWII. Allegedly commissioned by Soviet leader Leonid Brezhnev as he cruised along the nearby river while admiring the picturesque Kyiv hillside panorama, the monument is one of the tallest freestanding statues in the world. It is part of a sprawling WWIII Memorial Complex featuring a sculptural ensemble depicting Red Army forces crossing the Dnipro River. The giant hammer and sickle on the monument’s shield is the largest remaining Soviet crest still on public display in Ukraine. This has helped make the Kyiv colossus controversial among many Ukrainians who see it as an outdated and anachronistic symbol of Soviet power. Fans of the Motherland Monument like to point out that she stands facing towards the east in direct defiance of Russia. This positioning was presumably a Soviet oversight, but it has now become all too appropriate.

The history of Maidan is the history of modern Ukraine. Today, Maidan Nezolezhnosti (literally “Independence Square”) is familiar to TV news viewers across the global and world famous as a symbol of Ukrainian identity. However, there was a time in the early years of independence during the 1990s when the square was synonymous with Ukraine’s somewhat halfhearted separation from the Soviet past. A huge Communist hammer and sickle symbol continued to loom over Maidan, while the inappropriately named Moscow Hotel dominated the skyline. These perceptions changed dramatically during the 2004 Orange Revolution, when the square served as the stage for multimillion-strong protests over a rigged presidential election. Ten years later, another people power revolution would underline Maidan’s role at the center of modern Ukrainian history. The square hosted a vast improvised tent city during Ukraine’s pro-democracy 2013-14 Euromaidan Revolution. The massacre of protesters that marked the tragic climax of the crisis served to imbue the square with sacred status. It has remained at the center of the national narrative ever since as Ukraine has defended itself against Russia’s hybrid war. Memorial services for fallen soldiers regularly take place on Maidan, while it has become an obligatory destination for all visiting dignitaries, who pay their respects at the many shrines honoring the protesters killed in 2014.

Ukraine and Russia are not only engaged in a contemporary conflict. They are also at war over the past. Both nations trace their ancestry back to the early medieval Kyiv Rus state, and both lay claim to Volodymyr the Great (known as Vladimir the Great in Russia). Volodymyr was a tenth century ruler who converted the people of the Rus to Christianity, thus becoming the founding father of both the Ukrainian and Russian Orthodox Churches. The Kremlin recently moved to assert its historical claim by erecting a huge monument to Volodymyr in central Moscow. However, Ukraine has the trump card in this particular memory war, because Volodymyr was the Grand Prince of Kyiv. He lived in the current Ukrainian capital city and reigned for three decades from the year 980, over two centuries before the foundation of Moscow. The monument to Volodymyr in Kyiv is nestled in the leafy hills overlooking the Dnipro River and dates from the mid-nineteenth century Tsarist era. The location of the monument reflects the legends surrounding the conversion to Christianity, which speak of Volodymyr calling on the citizens of Kyiv to gather in the river below for mass baptism. It has been one of the most recognizable symbols of Ukrainian capital for over a century, appearing in the literature of celebrated Kyiv author Mykhail Bulgakov and on the banknotes of independent Ukraine.

Who needs the Riviera? Thanks to its position at a particularly wide and meandering section of the Dnipro River, Kyiv boasts more sandy beaches than most seaside resorts. Instead of relying on a single seafront strip of coastline, the Ukrainian capital has a dizzying array of beach options dotted across the city. Naturally, the bulk of these beaches lie in the geographical center of Kyiv around the Dnipro River itself, which is crammed with little islands and cozy inlets. Truhaniv Island is the physically closest beach zone to the downtown area. It reachable from European Square via pedestrian bridge. Visitors looking for the full beach resort experience complete with blaring pop music, sizzling fast food, watersports, poseurs, sun lounger rentals and so forth, should head to Hydropark metro station – the gateway to Kyiv’s somewhat kitsch and cute summertime resort district. Hydropark highlights include a fascinating and funky improvised outdoor gym area made entirely from the leftover scraps of Soviet heavy industry. Those with sophisticated tastes will be glad to learn that Hydropark also boasts a number of more refined beach clubs offering poolside restaurant services and a modicum of exclusivity away from the crowds.

Ukraine’s capital has always been an elegant and artistic city, but it is only in the last few years that it has transformed itself into a giant canvas. The street art craze began in the immediate aftermath of the Euromaidan Revolution as one of the many ways in which Kyivites chose to express feelings of national awakening and patriotism. It has since become more of an organized endeavor, with numerous initiatives by arts collectives receiving backing from the municipal authorities. Many of the world’s most famous street artists have come to Kyiv since 2014 to add their artworks to the city ensemble, while guided tours and special smartphone apps have been launched to help visitors and locals alike keep track of the street-level arts explosion. Kyiv is now the undisputed East European capital of street art with one of the fastest-growing mural scenes in the world. This trend has added to Kyiv’s contemporary hipster edge while brightening up the city’s considerable quota of identikit Soviet architecture.

How can a city that has never hosted an Olympic Games have an Olympic Stadium? Kyiv’s secret is simple enough – the city’s showpiece stadium played host to a series of group stage football matches during the 1980 Moscow Olympics, thus winning the right to use the Olympic label. This stunning stadium is one of the largest in Europe with a capacity of just over 70,000 and state-of-the-art facilities. Originally dating back to the early years of the twentieth century, the entire stadium complex underwent a complete renovation for the Euro 2012 European Championships and staged five games including the final itself. This renovation project transformed the complex and the surrounding area, which until the mid-2000s had been the site of a giant open-air food and clothes market. The Olympic Stadium regularly hosts Dynamo Kyiv and the Ukrainian national team home matches, and is a popular venue for major music concerts. The list of artists who have performed at the Olympic Stadium in recent years includes Madonna, George Michael, Depeche Mode and the Red Hot Chili Peppers. Guided stadium tours are available daily.

Kyiv is among Europe’s greenest capitals, a status befitting a country famed for its legendary fertility and general agricultural excellence. The spring and summer months are marked in Kyiv by an intoxicating explosion of greenery. Shaded parks and lush islands dot the city landscape, while blossoming chestnut trees line the Kyiv streets. It is wonderful place to be – unless you happen to suffer from seasonal allergies. Kyiv’s most elegant green area is the city’s National Botanical Garden in the Pechersk district overlooking the Dnipro River. Founded in 1936 and covering a total of 120 hectares, the National Botanical Garden features a range of geographical zones including the Ukrainian Carpathians, Ukrainian Steppe, Caucasus, Siberia and the Far East. The garden has all manner of special features include rose gardens and celebrated orchid collection. It houses two functioning monasteries that help to lend a spiritual edge to the ambience and are particularly popular on religious holidays. However, the Garden is most commonly associated with the annual lilac blossom, creating iconic views throughout the late spring season of blossoming plants decorating the rolling hills leading down to the Dnipro River.