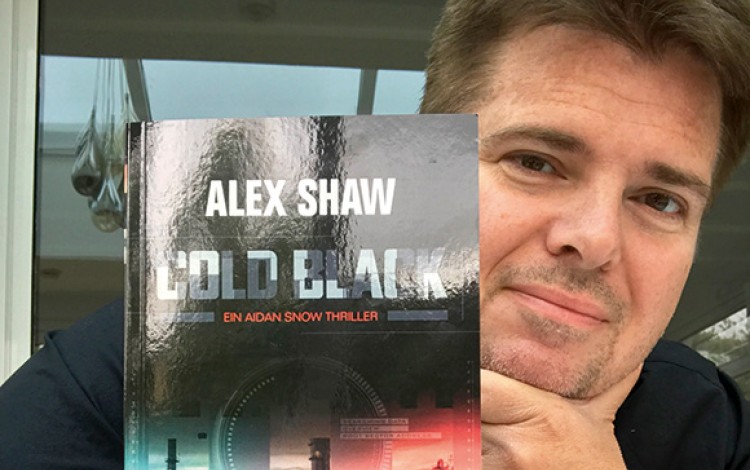 British novelist Alex Shaw is one of the few English-language authors to achieve international recognition for stories set in contemporary Ukraine. The former Kyiv expat has scored a string of successes with novels revolving around the escapades of Aidan Snow, a fictional former British Special Forces soldier with an affinity for all things Ukrainian. Shaw was first inspired to write while living and working in 1990s Kyiv. Despite leaving Ukraine some years ago, he has maintained his links with the country, using Ukrainian backdrops to great effect in his literary endeavours and visiting the country at every opportunity together with his Ukrainian wife. “I grew up in England,” he says, “but in my heart I feel Ukrainian.”

Shaw is a member of the ITW (The International Thriller Writers organisation) which boasts Lee Child as its President, and the CWA (Crime Writers Association). His Aidan Snow novels, partly set in Ukraine, have become international Kindle bestsellers and been nominated for the ITW’s “best original ebook” award. Shaw spoke to Business Ukraine magazine about his new book deal and discussed the challenges of writing Ukrainian spy stories at a time when the hybrid war realities in the real world are often stranger than fiction.

You have recently changed publishers. What will that mean for the Aidan Snow series?

My previous English language publisher, Endeavour Press, recently went into voluntary liquidation. Both former managing partners subsequently offered me publishing contracts with their new companies. However, I knew it was time to see what other opportunities were open to me, so I contacted six different publishers and two agents. Within a matter of days, I was extremely surprised to receive two confirmed offers and happily accepted a deal from HQ Digital, an imprint of HarperCollins Publishers. They will republish all three initial Aidan Snow books (Cold Blood, Cold Black and Cold East) in September.

Where did you first take your literary inspiration for the Aidan Snow character?

I am not going to fib. When I first started writing Aidan Snow, he was me. We were both British expats living in Kyiv, we both even lived in the same flat and worked at the same place. However, unlike Aidan Snow, I was not in the SAS (“Special Air Service”, a Special Forces unit of the British Army). Aidan initially appeared in 1996 when I started trying to write my first book. As this was a hobby and I did not know if I could do it, the novel took twelve years to complete. Thankfully, the rest of my books have been a little quicker to write. Like me, Aidan loves Ukraine and feels an affinity for its people. He is outraged by external Russian aggression and internal corruption. In giving him these opinions I have tried to make him seem less like a cardboard cut-out action hero and more like a real, living person.

How do you research the Ukrainian elements of your novels?

Much of my research has come from first-hand experience of my time in Ukraine and from speaking to family and friends who live in the country. I also tend to write “on location” meaning that I will sit in the place where a scene takes place and write it. This may sound like cheating but it does, I feel, add more authenticity. Of course, I also make extensive use of the many available online resources and tools like Google Earth/Streetview.

How important it is for you to provide an accurate portrayal of security and espionage issues in today’s Ukraine and to what extent are you comfortable employing poetic license to fit your storylines?

Security and espionage issues have changed dramatically since I started to write about Ukraine. I have attempted to keep up to date by speaking to local contacts and friends within the international security community and inside Ukraine itself. I think it is extremely important that my depiction of the SBU and other security organs is realistic but at the same time, that it is not sugar coated. Sometimes authors can also make the mistake of including too much detail into their work. This slows the narrative and can bore the reader. I am very much aware of this potential pitfall.

I have used poetic licence not so much with the storylines but with my central SBU character, Director Gennady Dudka. In my books, he is in charge of the SBU’s Anti-Corruption & Organised Crime Directorate, a branch that no longer exists under that name as far as I am aware. He has held this position for twenty years - something I know is not realistic as each new head of the SBU appoints new directorate chiefs. Despite all that, Dudka is an exceptionally fun character to write. He anchors each of the novels and is a fan favourite, which is why I have kept both him and his position unchanged. He has also appeared in his own short stories.

Since 2014, Ukraine has served as a laboratory for Russia’s entire hybrid war arsenal, including everything from “little green men” and social media troll offensives to cyber-attacks and fake news. Is this phenomenon something you have tried to introduce into the plots of your novels?

My thrillers Cold East and Cold Shadow both sought to address Russia’s aggression towards Ukraine and the whole issue of the “little green men”. The opening scene of Cold East has Aidan escaping from DNR forces who are equipped with Russian military hardware. This will be something that I shall also look to reflect in future works.

What kind of impact has Ukraine’s position at the epicentre of Russia’s hybrid warfare activities had on perceptions of the country within the world of international thriller writers - is Ukraine now playing a larger role in plotlines and becoming a more common backdrop to stories?

When I first started to write about Ukraine no one else was doing so. Since 2014, I have noticed more thrillers have started to mention Ukraine in passing. I hope that some of these books may serve to inform their readers a little about Russia’s actions within Ukraine. I am not at all anti-Russian, but I am very nuch anti-Russian aggression and anti the architects of this aggression. I hope that one day the Russian people will say enough is enough. I would much rather have readers wanting to read about Ukraine for positive reasons.

Facts are often stranger than fiction. Which real-life events during the past four years of hybrid warfare do you think publishers would have rejected as being too far-fetched to be believable?

I think the idea of Russia illegally annexing Crimea from Ukraine would have sounded highly improbable as recently as five years ago, especially as Russia had vowed to protect Ukraine after she gave up her nuclear weapons stockpile (as per the 1994 Budapest Memorandum – Ed.). The fact that the world stood by and watched this happen is even more far-fetched. Nevertheless, it did happen and the world has since rewarded the Russians by allowing them to host the 2018 World Cup.

International perceptions of Ukraine are often distorted both by historical and contemporary disinformation. Is this something you ever find yourself having to address when setting the scene for Ukraine-based elements of your books?

Readers have traditionally viewed Ukraine and Russia as part of the same family, almost interchangeable in fact. If they are family, it is Ukraine which is the older brother and not Russia. Prior to 2014, I think it was safe to say that many in eastern Ukraine did feel closer to Russia, but the question is whether they actually wanted to be Russian or leave Ukraine. In my opinion, they did not. This is the one biggest pieces of disinformation I have had to counter.

Will Aidan Snow be returning to Ukraine in your coming books?

Aidan Snow will always, one way or another, return to Ukraine. I am currently writing a new series and have just penned a scene that takes place in central Kyiv.

When you began writing the Aidan Snow novels, Ukraine was still very much off the international radar. The country is now regarded as one of the world’s geopolitical and military hotspots. Does this make it easier to generate audience interest in stories with Ukrainian plotlines?

Readers now seem to know where Ukraine is and what has happened to the country. In fact, my books have recently sold very well in Germany because of this growing awareness. Although having said that, one review did state that ‘Cold East’ was an advertisement for the Ukrainian Tourist Board. Now that did make me laugh!