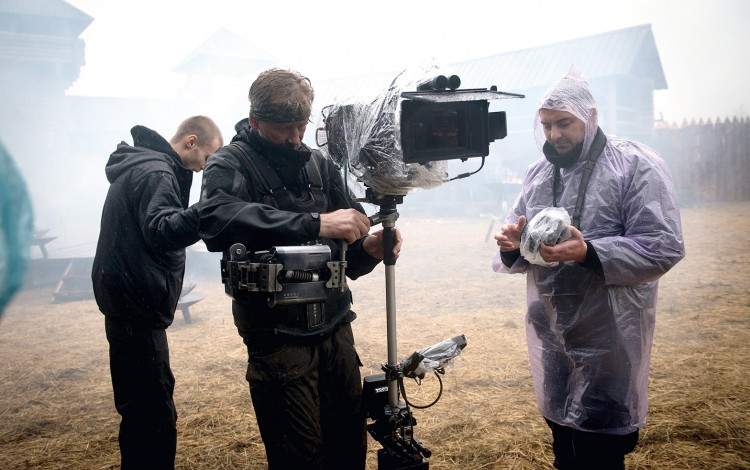 Can the growing international popularity of filming on location in Ukraine help harness the country’s cultural potential, reinvigorate the local film industry, and promote Ukraine in the global arena? According to three international filmmakers, the outlook is promising.

Ukraine played an important role in establishing the visual vocabulary of global cinematography, yet for many years, the country’s film culture has remained in splendid isolation from the global movie market. Today, as a new wave of Ukrainian cinema slowly emerges, spearheaded by Myroslav Slaboshpytskiy’s multiple award-winning movie ‘The Tribe’ (2014), a growing number of international directors are trumpeting to the country’s great cinematic potential.

Few countries can rival Ukraine’s far-reaching cinematic legacy.  World-famous cinema directors such as Sergei Eisenstein and Dziga Vertov laid down the foundations of world cinema in such key works as ‘Battleship Potemkin’ (1925) – with its famous scene on the Odesa steps – and ‘Man with the Movie Camera’ (1929), also set in Odesa. The Ukrainian SSR played an important role in Soviet film production, with four major film studios and a host of such notable directors as Oleksandr Dovzhenko, Larisa Shepitko, Yuri Ilyenko, and Sergei Parajanov (whose 1965 film ‘Shadows of Forgotten Ancestors’ recently became part of the Harvard Film School curriculum). Kira Muratova’s experimental films bridged the divide between Soviet and post-Soviet cinema, yet for the past two decades Ukrainian cinema lacked definition, with few films produced and even fewer making it to international film festivals, let alone commercial distribution.

The authoritarian system of the Soviet era presented numerous challenges to creative work, including censorship, persecution, and the ‘insulation’ of national cultures through Russian dubbing when distributing across the USSR. The Soviet authorities invested generously in film production and film education in a range of profiles – from features to documentaries, from television musicals to agitprop reels. Lenin himself noted that ‘of all the arts, cinema is the most important’. The Soviet film industry was financed exclusively through state commissions, and in their absence, the Ukrainian national film industry was virtually annihilated in the early independence years.

Thanks to the National Oleksandr Dovzhenko Film Centre and the Ukrainian State Film Archive, a new generation of Ukrainian filmmakers, critics, and film lovers is rediscovering the country’s cinematic legacy. The centre’s dynamic manager Ivan Kozlenko has turned the crumbling industrial estate into a thriving arts venue, and a member of the International Federation of Film Archives.

Meanwhile, the image of Ukraine that was presented in such foreign films as ‘Lord of War’, ‘Everything is Illuminated’, ‘Transformers’, ‘Import/Export’, and ‘Tomorrowland’ was that of a backward post-Soviet wasteland, with the arms trade, prostitution and human trafficking depicted as the predominant national industries. It seems like there is no time like the present to challenge, or at least diversify, that impression.

For the first time in over two decades, we can tentatively speak about a veritable revival of Ukrainian cinema. Much of the progress is due to the new blood flowing in, both in the creative and in the administrative sectors. The Ukrainian State Film Agency, Derzhkino, which functions under the Ministry of Culture, is the primary government body tasked with developing the economic and legal basis for film production in Ukraine. Headed by Philip Ilyenko, the son of the famous director Yuri Ilyenko, Derzhkino’s image has smartened up in recent years as Ilyenko has established a more prominent presence for Ukrainian cinema at major international film festivals. Crucially, he has also made provision for English-language consultations to foreign production companies looking to work in Ukraine. Moreover, over 50 feature films where funded by the state in the past three years, Slaboshpytskiy’s ‘The Tribe’ among them.

Ukraine’s up-and-coming filmmakers are becoming more resourceful, applying for funding abroad as well as fundraising privately. Today, there are dozens of Ukrainian production companies employing modern practices in fundraising, marketing, and promotion. For now, the goal is to stay in the black. If Ukrainian filmmakers play their cards right, there can be considerable returns to their investments in the coming years. The key is establishing long-term working relationships with agents abroad that could help to promote successful features on the international market.

Found in translation: foreign filmmakers on working in Ukraine

International co-productions could certainly offer a much-needed boost to the Ukrainian film industry. Three foreign film directors who have worked in Ukraine shared their experiences with Business Ukraine magazine. According to them, Ukraine has a number of critical advantages: the full range of technical facilities and services are here and are available at a fraction of the cost.

Olias Barco is a French director who splits his time between France, Belgium, and Ukraine. When he visited the Odessa Film Festival several years ago, he struck up a friendship with Dennis Ivanov, producer and distributor of ‘The Tribe’. This friendship led to his biggest project to date, a surreal coming-of-age tale called ‘Polina’, filmed entirely at FILM.UA studios in Kyiv with a predominantly Ukrainian cast and crew. “I had nursed the idea for the film for several years and spent three years on casting, but it was only here in Ukraine that everything fell into place,” he says. “We could build any set that we wanted to – but in fact, we used much of the Viking set, as well as parts of the city’s architectural landscape. The post-production, which is still ongoing, is of an exceptionally high standard.”

Since this initial experience, Olias has put down roots in Ukraine and has great plans for many more creative projects in the country as a director, producer, and photographer. He has made promoting Ukraine’s creative potential his mission, and regularly voices his fascination for Ukraine in the international media, inviting many of his renowned creative friends and colleagues to visit him here in search of prospective collaborations.

For the director of the Sundance Grand Jury winner ‘The Russian Woodpecker’, a movie that follows eccentric artist Fedor Alexandrovich on a conspiracy trail around the Chernobyl disaster, Ukraine was a chance discovery. “I initially came to Kyiv to work on a theatre production based on Tolstoy’s Anna Karenina in January 2014. It was a joint project with the National Academy of Fine Art, and it is there that I met Fedor, the set designer,” explains American director Chad Gracia. “He would pull me aside during rehearsals and rattle off his bizarre suspicions about the true origin of the Chernobyl disaster.” When citing the advantages of working in Ukraine, he says that ‘it is the only post-Soviet society where [he] felt completely safe.’ For him, Ukraine today is ‘the most important place’, where the final battle of the Cold War takes place. The long history of Ukrainian film and cinema is a major attraction: he cites ‘tonnes of great talent’ – including his own cinematographer Artem Ryzhykov – and while he is reluctant to reveal the film’s budget, says that production and post-production cost him only about a fifth of what it would otherwise have been in New York City.

For seasoned Danish filmmaker Jonas Elmer, who has a number of award-winning feature films and over a hundred commercial productions under his belt, Ukrainian crews and talent have been the most interesting to work with. “I feel that the Ukrainian people are in general nice and easy to talk to. When you do commercials, politics is often involved – but here I can be myself when I work.” He first started coming to Ukraine about 5 years ago when his agent in Denmark got him involved in some commercial work for the Russian market. Since then, he has come 20-25 times. According to Jonas, who has worked in Denmark, Germany, and Spain, the film crews in Ukraine are of a very high standard and most speak English. The equipment is professional, and the sets are brilliant. “Quite often, we don’t have to build anything additional, and we just leave things as they are. The possibilities here are huge. In Denmark, the state annually gives about EUR 5 million for film production, with 20-25 films released.  I would like to see the Ukrainian government giving more support to Ukrainian filmmakers. Why haven’t we heard about any of the Ukrainian films that are being produced?” When asked whether he would consider returning to make a feature in Ukraine, he says that it would be an absolute luxury.

The impact of Ukrainians on global cinematography is rich and diverse. It is now in vogue among Hollywood A-listers to cite Ukrainian heritage: Stephen Spielberg, Sylvester Stallone, Johnny Depp, Leonardo DiCaprio, Dustin Hoffman, Michael Douglas, Natalie Wood, Wynona Ryder, Mila Kunis, Mila Jovovich, and Whoopi Goldberg have all made their mark in Hollywood while claiming ancestral ties to Ukraine. Hopefully the current generation of Ukrainian filmmakers will make as much of an impact on world cinema in the years to come. The presence of growing numbers of international filmmakers in the country would certainly help to get the word out about Ukraine’s wealth of cinematic talent.

About the author: Myroslava Hartmond is the owner of Triptych: Global Arts Workshop (www.t-gaw.com), Ukraine’s first private fine art gallery since 1988, and a Research Associate of the Centre for International Studies, University of Oxford, where she explores the role of cultural diplomacy in Ukraine