UKRAINE IN FASHION: Charting the global rise and rise of Ukrainian designer labels

From the pages of Vogue magazine to the catwalks of Paris and Milan to the wardrobes of Hollywood celebrities and European royalty – how Ukrainian fashion conquered the world in 2016. 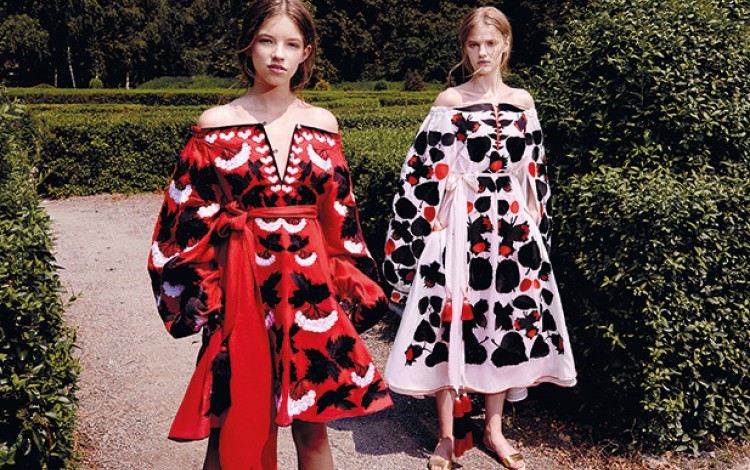 Since the start of the Euromaidan protest movement three years ago, Ukraine has rarely been out of the international headlines. Media coverage has largely focused on the traumatic and tragic events surrounding the country’s anti-corruption revolution and hybrid war with Russia. However, this increased exposure has also served to draw attention to other aspects of Ukrainian identity.

One of the big winners has been the Ukrainian fashion industry, which has capitalized on heightened international attention to become one of the surprise hits of the past few years. With initial outside curiosity piqued by the post-Euromaidan explosion in patriotic streetwear, 2014 saw many early international adopters of Ukrainian fashions sporting variations on the traditional Ukrainian vyshyvanka embroidered shirts. This trend has since expanded to include everyone from Hollywood film stars and TV idols to European royalty. Indeed, when Holland’s Queen Maxima stepped out at the summer 2016 Rio Olympics in an embroidered dress by superstar Ukrainian designer Vita Kin, she was more copycat than trendsetter.

The rise and rise of Ukrainian fashion

Ukrainian designers did not simply appear out of nowhere in 2014. Anyone who has spent any time in Kyiv or the country’s other large cities will confirm that the local population pays great attention to personal presentation and follows the latest international trends closely, while also showing a flair for elegant originality. This passion for fashion, married with the tough economic realities of the post-Soviet era, has helped to fuel the growth of a vibrant domestic Ukrainian fashion scene populated by ambitious local designers and small-scale brands.

The Ukrainian fashion industry has been maturing and expanding for many years, although it previously did so off the international radar and with a largely domestic clientele in mind. The international attention generated by the geopolitical turbulence of the past three years has encouraged the international fashion industry media to take a closer look at what the Ukrainian scene has to offer. Ukrainian designers have seized this long-awaited opportunity, using the newly discovered spotlight to emphasize the vivid and unique aesthetics of Ukrainian design while also showcasing their competitiveness on the international marketplace. Euromaidan give a new generation of Ukrainians their political voice, but it also helped Ukrainian fashion designers express their point of view and creativity.

The foundations of Ukraine’s fashion scene success remain very much in Kyiv. At present, ‘Made in Ukraine’ brands are seen as must-have items in the Ukrainian capital, with competitively low prices combining with patriotic passions to make local labels more popular than ever. Kyiv currently plays host to two regular fashion week events, both of which run shows twice a year. Once seen as somewhat parochial events populated by local celebrities and wealthy oligarchs keen to soften their public image, fashion week events in Kyiv now attract journalists and buyers from across the world, all eager to identify new talent emerging along the Ukrainian fashion conveyer belt.

From Paris catwalks to Vogue magazine

Since 2014, the Ukrainian presence at international fashion weeks and other prestige podiums has expanded rapidly. Three years ago, Ukrainian brands Paskal (founded by Yulia Paskal) and the eponymous Lena Lumelsky were among those to appear on the shortlist for the prestigious annual LVMH Prize for Young Fashion Designers. In 2015 Anton Belinskiy made the list, while in 2016 it was Anna October’s turn to fly the flag for Ukraine. As well as competing for major international awards, Ukrainian designers are also increasingly featuring on the catwalk. Paskal put on a show in the French capital during the first day of this year’s Paris Fashion Week, while the brand is also present in the US, Canada, Italy, the UK, Belgium, China, Georgia, Japan, Korea, and a host of additional international markets. Stunning redheaded Kyiv designer Anastasiya Ivanova has also confirmed plans to participate in New York Fashion Week with her Spring/Summer 2017 collection.

The Ukrainian catwalk invasion of the past few years has been impressive, but perhaps the biggest shift has been in the increasing amount of column inches and photo spreads dedicated to Ukrainian designers in the international fashion press. Industry leaders like Vogue magazine, NotJustALabel, and fashionista.com have regularly gushed over the latest Ukrainian designs, while the mainstream media has also taken note. Articles on the rise of the Ukrainian fashion industry have appeared in leading UK newspapers such as the Guardian, Daily Mail, and Daily Telegraph.

Elsewhere, international academics have been quick to identify the potential broader implications of this trend. “From Vita Kin to X’U by Ksenia Schnaider, the world has fallen in love with Made-in-Ukraine fashion offerings . Perhaps fashion can become a staple of Ukraine’s diplomacy in the future,” commented Stephan Rabimov, Director of Social Media and Fashion Journalism at Academy of Art University in San Francisco.

Despite the rising popularity of a diverse range of Ukrainian designers, notions of Ukrainian fashion inevitably remain intertwined with traditional Ukrainian vyshyvanka-style embroidered clothing. The ethno-chic style epitomized by Ukraine’s vyshyvanka costumes has been beautifully exploited by popular Ukrainian designers like Vita Kin and Yuliya Magdych, but it would be unfair to suggest that today’s generation of Ukrainian designers are overly reliant on this timeless source of inspiration. Ksenia Schainder’s innovative and original split denim jeans (known as a ‘Demi cut’ style) have been hailed by Vogue magazine as Autumn 2016’s ‘coolest new jeans’, while German web portal modepilot.de also dedicated an article to ‘those jeans’. Such exposure has helped to make Kyiv-based Schnaider one of the hottest names in world fashion despite the fact that her most popular creations are far away from the embroidered elegance more traditionally associated with Ukrainian designers.

Nevertheless, vyshyvanka-style items are undeniably popular, helping a number of Ukrainian designers to establish global presences in recent years. Vita Kin has probably enjoyed the most international success, and is currently available in North America, the UK, France, Italy, Monaco, Germany, and beyond. She is a favourite with celebrities and, as already mentioned, members of the Dutch royal family.

Fellow vyshyvanka devotee Yuliya Magdych is the first Ukrainian designer to be represented at the prestigious Selfridges department store in central London. In a summer 2016 profile interview with Vogue magazine, she explained her passion for Ukraine’s ancient vyshyvanka style as a tribute to the country’s colourful heritage. “Ukraine is a very mystical country with a lot of traditions,” she explained.

The growing popularity of Ukrainian designers both at home and abroad is fuelling the growth of the fashion business in a country where designers once depended almost entirely on individual sales to a handful of wealthy clients. The Ukrainian fashion industry is now becoming an increasingly profitable and professional business, with leading retail outlets dedicating growing floor space to Ukrainian designer labels. Leading Ukrainian retailer Helen Marlen Group is one of many to increase the space allocated for Ukrainian designers in recent years. “The quality and urgency of a collection is very important for us, as well as the professionalism of the whole design team,” says Helen Marlin Manadarin buyer Elena Paschenko. “We currently stock Ukrainian brands including Litkovskaya, Poustovit, Anna K and Sleeper. Our top Ukrainian seller in 2016 has been Anna October.”

The most prominent retail chain on the domestic Ukrainian fashion brand scene is the second and ‘more democratic’ line by celebrity designer Andre Tan, named A.Tan. Currently available via 30 outlets in Ukraine, the brand has plans to expand into Poland and the US.

Ukrainian industrial fashion brand TAGO has two showrooms in Ukraine and operates online, selling their products in Russia, France, Italy, Germany, UAE and Los Angeles. TAGO has chosen the business strategy popularized by H&M, presenting itself as a mass-market brand with affordable prices featuring capsule collections produced each season in partnership with well-known Ukrainian designers. Other commercially successful Ukrainian brands include Katerina Kvit and T.Mosca. The quirky ‘The Coat’ brand by Katya Silchenko has recorded impressive sales on the Ukrainian domestic market while branching out internationally to Korea, Italy, Kazakhstan, England, and the US.

In addition to the ever-growing list of Ukrainian designers based in Ukraine itself, there are number of brands with Ukrainian roots that have established themselves abroad. Natasha Zinko boasts a London boutique offering ready-to-wear designer items and jewelry. She has a private showroom at Paris Fashion Week and her designs are available at 80 stores worldwide. Meanwhile, American-Ukrainian fur-based brand Blood & Honey is registered in New York City and has a strong presence throughout North America, but also exhibits in Ukraine and around the world.

Brand UA: the next generation

The list of Ukrainian designers making their mark on the international fashion scene looks set to grow further in the coming years as industry opinion-shapers continue to flock to Kyiv in search of the next big thing. Milan-based La Rinascente buyer Fulvia Galbusera says: “when I first attended Mercedes-Benz Fashion Days in Kiev in March 2016, I was positively surprised by the choice on offer and decided to dedicate a whole corner to Ukrainian designers which will open during Milan Fashion Week. I hope our clients will support this initiative.”

Given the inherently fickle nature of the international fashion industry, Ukraine’s moment in the limelight will not last forever. Even so, it is exciting to see modern Ukraine receiving recognition as a creative and innovative country with a major contribution to make to global style trends. The current international focus on Ukrainian brands has given the domestic fashion industry a major boost. It will inspire the next generation of Ukrainian designers to become globally competitive and raise the standards of the entire industry.

About the author: Ana Varava is Chief Editor of L’Officiel Ukraine. She is also an experienced fashion business consultant and professional image-maker.