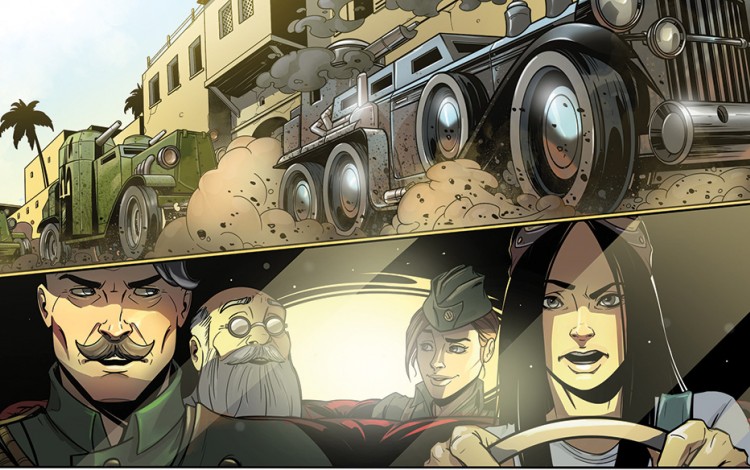 "The Will" comic book franchise offers a fantasized Hollywood version of Ukrainian history that seeks to generate public interest and challenge many of the Russian narratives that continue to enjoy mainstream acceptance in modern Ukrainian society
Peter Dickinson, Business Ukraine magazine

When the Kremlin attack on Ukraine began in spring 2014, it came accompanied by claims that Ukraine was an intrinsic part of the “Russian World”. As Russian hybrid forces fanned out across eastern Ukraine, official voices in Moscow placed great emphasis on protecting the rights of Russian-speaking Ukrainians, while Kremlin agents spoke of creating “Novorossiya” (“New Russia”) amid the wreckage of a partitioned Ukraine. In the information sphere, Soviet Ukraine’s WWII experience alongside Russia served as the chief totem in a propaganda campaign designed to underline the common inheritance binding the two nations together, while supporters of Ukrainian sovereignty found themselves depicted as dangerous extremists. At one point, the Kremlin even expressed alarm and indignation over the alleged “Ukrainization of Ukraine”. Moscow’s message was loud and clear: Ukrainians would remain firmly within the “Russian World”, whether they liked it or not.

Despite its centrality to the current conflict in Ukraine, nobody has yet been able to say exactly what the “Russian World” is. For some, it means anywhere the Russian language is spoken. For others, it refers to the lands of the old tsarist and Soviet empires. The term also implies a russocentric worldview and hints at alignment with Kremlin-style authoritarian conservatism. In the final analysis, the concept of a “Russian World” may actually be more rooted in culture than politics. It is a lifestyle choice rather than ideology and is held together by the social glue of shared TV shows, pop music, movies and fashions.

This is certainly the view of Denis Fadieiev, one of four Ukrainians behind a comic book publishing phenomenon that aims to strike back against the Kremlin’s cultural imperialism while encouraging Ukrainians to take greater interest in their own history. “The current war is all about cultural conquest,” he says. “It is no coincidence that the so-called Russian World was particularly popular in Crimea and Donetsk. This is why they are now under occupation. If people there had grown up with their own Ukrainian popular culture instead of endless Russian TV shows about Moscow police officers and war in Chechnya, they would have fought back.”

Fadieiev and his colleagues are the creators of the steampunk comic book “The Will”. Set in the aftermath of the Bolshevik Revolution and loosely based on actual historic events and personalities, the comic series offers a Hollywood blockbuster interpretation of Ukraine’s failed early twentieth century independence bid, complete with dashing heroes, arch-villains, amazing inventions and a seemingly endless supply of ghoulish Soviet zombies. It is an unapologetically glamorized and decidedly upbeat fantasy vision of Ukrainian history that seeks to counter what Fadieiev dismissively calls the “poor me” version of the national narrative. “There is currently far too much emphasis on Ukraine’s supposedly miserable fate as a perpetual victim, when what we really need as a nation is positive content.”

The first volume of “The Will” appeared in May 2017 and proved an instant hit. With sales of over ten thousand copies, it became comfortably the biggest-selling Ukrainian-language comic book ever published. This enthusiastic reception has since led to the launch of a number of spinoffs including a board game and miniature figures, with a computer game in the works and talks underway over a possible feature film. The success of “The Will” also made a comic sequel inevitable. Volume II was unveiled at Ukraine’s annual Comic Con event in Kyiv on 22-23 September and was among the highlights of the entire event.

This latest installment expands the geographical scope of the franchise considerably, with plot twists taking the main characters from Egypt to Lviv. Once again, Bolshevik leaders Lenin and Trotsky appear. Ukrainian anarchist icon Nestor Makhno makes his debut alongside many of the historical personalities who led Ukraine’s statehood bid. Plotlines employ considerable poetic license while remaining broadly rooted in the realities of the era. In the alternative universe created by “The Will”, for example, America does not enter World War I in 1917 and the war continues beyond 1918.

There is also considerable attention to detail. In reference to his Russian Imperial Army service during the 1904-05 Russo-Japanese War, Ukrainian Hetman Pavlo Skoropadsky appears in the comic armed with a samurai sword. “We do not know whether the real Skoropadsky ever owned a samurai sword, but he did fight the Japanese so he might have acquired one at some point,” explains Fadieiev. “We include these little details to add to the authenticity of the story and to encourage readers to delve deeper into the background behind the action.”

Fadieiev sees his comic series as an effective way of promoting greater public interest in Ukrainian history and argues that the almost complete absence of similarly engaging local content made Ukraine an easy target for cultural domination by neighboring Russia. Part of the first generation to post-independence Ukrainians, he complains that many of his compatriots do not know nearly enough about Ukraine’s history and are not particularly eager to learn. Rather than lecturing them, he advocates entertainment. “Sadly, knowledge of our own history is still very limited in today’s Ukraine. I believe pop culture is the best way to improve the situation. It is the ideal medium to engage with wider audiences and provide them with a better idea of their own history and national identity. We can educate people while entertaining them. It has to be interesting otherwise people will simply ignore it.”

Despite the relative success of “The Will”, Fadieiev and his partners continue to manage the project in addition to their day jobs in the computer gaming industry. He says he sees the comic as his contribution to the country’s war effort, calling it both a hobby and a patriotic passion. “We are not publishers by profession. We are just a group of simple guys who saw a need and decided to create something new for our country.” This unexpected foray into the world of comic book publishing is very much in line with the ethos of contemporary Ukraine, where the harsh necessities of the ongoing hybrid war with Russia have given rise to a nationwide volunteer movement that has seen people thrust into all manner of unfamiliar roles, often alongside their regular employment. Fadieiev says it is only natural that he and his comic book collaborators sought to make their own contribution. “There is a war on. What we have tried to do is create a game-changing weapon on the information front.”

The broader significance of “The Will” on the information front of the hybrid war with Russia is not yet clear. Nevertheless, the Russian reaction strongly suggests that the project has struck a nerve in Moscow. Numerous Russian outlets reported on the launch of the comic, with most voicing criticism over the appearance of a narrative that directly challenged orthodox Russian and Soviet views of twentieth century history. This angry response reached a climax with a suitably breathless prime time show on Russian state TV focusing on the comic. Fadieiev cannot disguise his delight as he recounts the horrified expressions on the faces of the show’s hosts. He calls the show “the best advertisement we could possibly have dreamed of.”

Fadieiev sees Russia’s negative reaction as a backhanded compliment indicating a sophisticated appreciation of the role played by pop culture in modern hybrid warfare. “The Russians were extremely quick to recognize how dangerous our comic is for them because they appreciate the importance of cultural conquest. Projects like ours show how it is possible to challenge or even replace Russia’s traditional dominance in the information and entertainment spheres. That makes us a huge threat.” Fadieiev believes this heightened Russian sensitivity towards cultural control is rooted in the bitter experience of the Soviet collapse. “The Soviet Union was defeated by Hollywood movies, blue jeans and the American dream. Once you understand this, you will quickly appreciate the importance of the cultural front in the current conflict.”

With a readership in the mere thousands, Fadieiev’s comic franchise will not win the culture war on its own or singlehandedly transform the way Ukrainians view their country’s past. Nevertheless, he sees the comic as a trailblazing pioneer and hopes it will inspire others to attempt similarly ambitious endeavors. “We are little guys with big ambitions,” he says. “People might not necessarily understand where we are coming from, but they will eventually. When they look back in ten years or so, they will see how important this was for our country and our culture.”