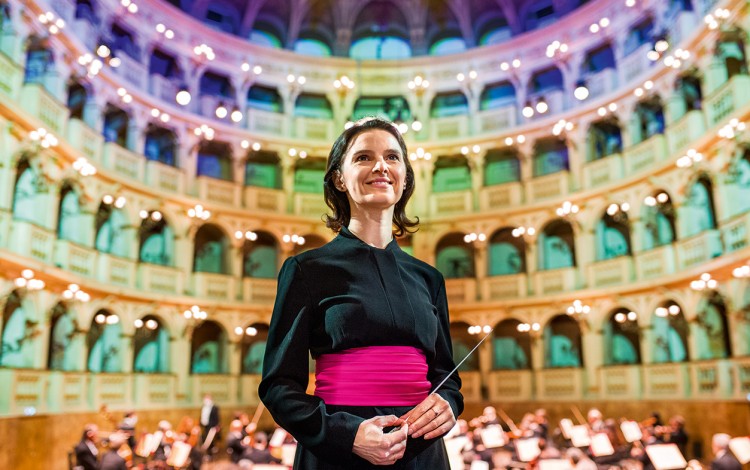 Superstar Ukrainian conductor Oksana Lyniv is making musical history yet again. The 43-year-old native of Brody in western Ukraine was unveiled in October 2021 as the new musical director of the Teatro Comunale di Bologna in Italy. When she takes up what is envisaged as an initial three-year posting in Bologna in January 2022, she will become the first female conductor ever to be appointed as musical director of an Italian opera house.

Lyniv is no stranger to groundbreaking firsts of this nature. She has consistently been a trailblazer throughout a remarkable classical music career that has often seen her challenge gender stereotypes and rewrite the rule book.

Born into a family of musicians in Soviet Ukraine during the twilight years of the Brezhnev era, Lyniv began her rise to prominence while studying at Lviv’s Lysenko Music Academy in the late 1990s. Recognized as a young prodigy, she was able to gain important early exposure as an assistant conductor at Lviv Opera House before moving abroad to continue her musical studies in Germany.

While she has spent much of the past two decades building her career in the German-speaking heartlands of European classical music, Lyniv also enjoyed a extended residency in Odesa. From 2008 until 2013, she served as associate chief conductor at the Odesa National Opera, gaining valuable experience in the splendid surroundings of the Ukrainian Black Sea port city’s sumptuous late nineteenth century opera house.

The Ukrainian star’s growing reputation as one of the world’s most exciting classical music talents was considerably enhanced in 2017 when she became the first woman to be appointed as chief conductor of the Graz Opera and the Graz Philharmonic Orchestra in Austria, a role she remained in until 2020. However, even this impressive accolade was eclipsed in summer 2021 when Lyniv made international headlines as the first woman ever to conduct at Germany’s prestigious Bayreuth Festival.

Lyniv’s July 2021 Bayreuth Festival appearance in front of a star-studded audience including German Chancellor Angela Merkel was a genuine landmark event in the world of classical music that helped to consolidate the Ukrainian’s status as a global star. In the more than 140 years since the Bayreuth Festival was first launched by Richard Wagner himself in 1876, the celebrated annual event had never before featured a female conductor.

“Of course it is very special to be the first woman since the founding of the Bayreuth Festival to conduct at this magical place,” Lyniv commented during an interview with German media outlet DW prior to her historic appearance at the festival in summer 2021. “Richard Wagner has written women into his operas with leading, action-packed roles and has portrayed them as very emancipated. That’s why I believe he would be proud that almost 140 years after his death, a woman will bring his wonderful music to life for the first time on the podium.”

Within weeks of her German triumph, Lyniv was entering the record books once more, this time in Italy. The Ukrainian actually made her first appearance at the Teatro Comunale di Bologna months before the Bayreuth Festival in March 2021 as guest conductor at a concert performed without an audience due to Covid-related restrictions. Two months later in May 2021, she returned to Bologna to perform before a full house for the first time. These appearances proved enough to secure her new position as musical director.

In a social media post announcing her new role in Italy, the Ukrainian conductor acknowledged the historical significance of the appointment. “I have the honor and responsibility to become the first woman to be invited to become the musical director of one of the most important Italian state theaters, in a country where classical music has an extraordinary history that is felt in every corner and is an integral part of the national culture,” she commented.

Lyniv’s remarkable achievements have led to a string of accolades and awards. In December 2020, she was named Conductor of the Year at Germany’s prestigious Oper! Awards. During celebrations to marked the thirtieth anniversary of Ukrainian independence in August 2021, she received the Order of Princess Olga from President Zelenskyy.

Lyniv’s more novel honors include the creation of a Barbie doll in her likeness, which was produced in autumn 2021 especially for an Odesa exhibition entitled “Dreamers and Inventors.” Meanwhile, one of the superstar Ukrainian conductor’s most meaningful awards to date came in October 2021, when she was named as the recipient of the 2021 Saxon Mozart Prize together with the Youth Symphony Orchestra of Ukraine, which Lyniv founded in 2016 in a bid to bring young musicians from across Ukraine together and help unite the country.