Ukrainian Chicago magazine seeks to entertain while serving as a flagship publication for large Ukrainian diaspora community in the U.S. and Canada 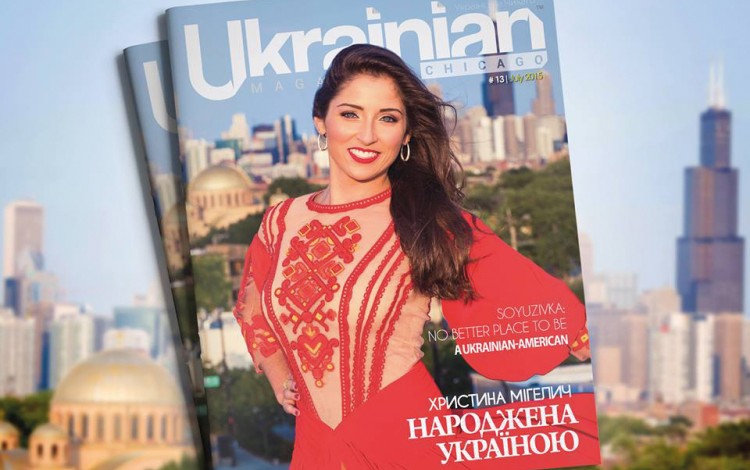 Early 2015 saw the launch of a new glossy magazine targeted at the large Ukrainian-American population in the Chicago area. Ukrainian Chicago magazine is published by Chicago-based multimedia company VIDIA, which also runs the Ukrainian diaspora news outlet www.vidia.org. It offers a range of content including coverage of events within the diaspora community, articles on cultural and social issues, and interviews with prominent Ukrainian-Americans and friends of Ukraine.

Ukrainian Chicago magazine began life in 2011 as a blog on the Chicago Tribune website before eventually launching as a stand-alone title. The magazine is a bilingual (English and Ukrainian) publication available in digital and print formats. Complimentary copies can be picked up at a range of distribution partners throughout the Chicagoland area, while magazines are also mailed out to subscribers across North America. According to the magazine’s publishers, the digital version has proved popular among international Ukrainian audiences, with an online readership concentrated in the U.S., Canada, Britain, Russia, Poland, Italy, Germany, Australia and Spain, as well as Ukraine itself. As the publication marks its first anniversary, Business Ukraine magazine spoke to co-founder Yuriy Figel about the concept behind Ukrainian Chicago magazine and his plans for further expansion in the year ahead.

What role do you see Ukrainian Chicago magazine playing in the life of Chicago’s Ukrainian dispora population?

This is a publication the Ukrainian community has lacked for a long time. The magazine aims to facilitate tighter bonds between Ukrainian-Americans and new immigrants, between those who speak English and their Ukrainian-speaking peers. We also strive to promote Ukraine and the community via engaging stories and eye-catching design, as well as by organizing attractive events with A-list guests that everyone wants to attend.

What kind of editorial balance do you aim to strike between cultural and community coverage versus political and historical commentary?

We only write about interesting stuff and only cover exceptional community events. If a story is engaging enough to retain the reader, whether it is political, historical, or cultural, we will consider writing about it.

Can publishing and media projects targeted at the North American Ukrainian diaspora be commercially viable?

Let me put it this way - publishing targeted solely at the Ukrainian diaspora is not a commercial venture. It can be viable to the point where it covers some or the majority of the expenses involved, but it still requires ongoing funding from other projects.

What has been the community response so far to the arrival of Ukrainian Chicago magazine?

We have been thrilled and grateful for the amazing response to the magazine within the community! We received an enormous amount of positive feedback via email, phone calls, and social media. The publication has generated plenty of buzz in the media and on social platforms such as Facebook and Twitter. This is a clear and strong indication that we have hit a home run with our decision to launch this publication.

How have the past two years of revolution and war in Ukraine shaped attitudes towards identity within the North American Ukrainian diaspora?

The historic events in Ukraine have had an obvious and unmistakable unifying effect on the Ukrainian diaspora. People have become much more active. They are proud of Ukraine and the Ukrainian people.

Will Ukrainian Chicago magazine seek to build ties with other Ukrainian diaspora communities in North America? Could there be further publications in the pipeline?

The publication already caters to other Ukrainian communities in America. The magazine is an experiment to test the market for such products. If our experience reveals that strong demand exists, there may very well be further publications coming up. The Ukrainian Chicago magazine itself may also evolve into something completely different.

Do you see Ukrainian Chicago magazine playing a role in introducing Ukrainian culture and Ukrainian issues to audiences beyond the diaspora?

Absolutely! This is part of our vision for this project. We are already reaching readers well beyond the Ukrainian diaspora and our feedback suggests they love exploring Ukraine and its culture by flipping through the pages of Ukrainian Chicago magazine. We’d like to make this publication as interesting to our readership as possible, therefore any feedback is extremely valuable and we encourage our audience to engage with us on social media.

About the interviewee: Yuriy Figel (This email address is being protected from spambots. You need JavaScript enabled to view it.) is the co-founder of Ukrainian Chicago magazine