FROM POST-SOVIET TO NEW EUROPE 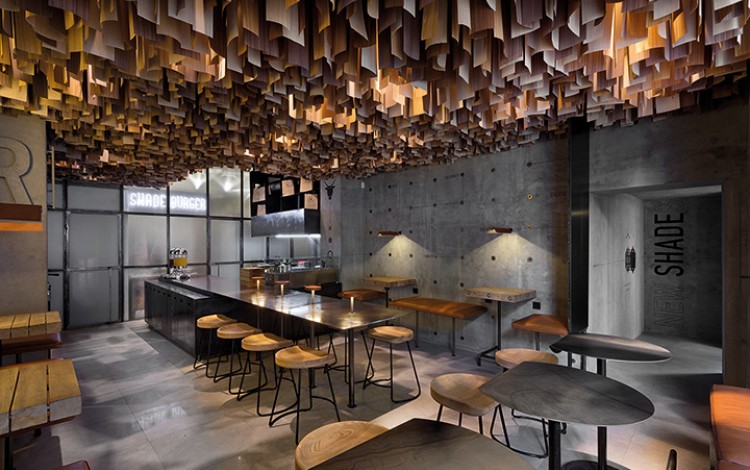 Provincial Ukrainian in the international limelight: the Shade Burger interior was ranked as Europe's finest at the 2017 Restaurant and Design Awards in London on 5 October
Business Ukraine magazine

Europe’s most stylish restaurant interior is located in Ukraine! Perhaps even more surprisingly, the award-winning restaurant in question is not located in the heart of booming Kyiv or on the elegant boulevards of cosmopolitan Lviv and Odesa, but in relatively provincial Poltava.

Poltava restaurant Shade Burger emerged as winner in the “Europe Restaurant” category at the 2017 Restaurant and Design Awards in London on 5 October. The Restaurant and Bar Design Awards, now in its ninth year, is a globally recognised competition dedicated to the design of food and beverage spaces. It covers every imaginable space, from ships to airports, museums to burger vans, and from Michelin-starred establishments to the fleeting fancies of pop-up street food culture.

This prestigious award has shone the international spotlight on Ukraine’s increasingly innovative and impressive design industry. It highlights the grassroots shift currently underway in the country as Ukraine distances itself from post-Soviet ostentation and increasingly integrates into the contemporary European cultural community. The Poltava restaurant interior that caught the attention of the London jury features minimalist post-industrial concrete aesthetics and funky lighting solutions with a democratic seating ensemble. All this is a long way away from the traditional post-Soviet emphasis on extravagance and excess that saw Ukraine stereotyped as home to tasteless vulgarity and crude displays of material wealth.

The award-winning Shade Burger interior design is the work of Ukraine’s YOD Design Studio. Founded in 2004, YOD Design Studio currently has 16 employees with a central office in Kyiv and an additional branch in Kharkiv.  The studio focuses primarily on the hospitality sector. YOD designers have worked on many of the new generation of Ukrainian venues that are helping set the tone as the country builds itself a reputation as one of New Europe’s most vibrant and innovative design scenes. Business Ukraine magazine caught up with YOD director and founder Volodymyr Nepyivoda to discuss the studio’s recent international recognition and explore how dynamic design can help build the new Ukraine.

What was your reaction when you learned your Poltava Shade Burger interior design work had taken first place in the European Restaurant category at the 2017 Restaurant and Design Awards?

At first, it was a case of frantic emotions! At the same time, it took a little while for me to believe that we had really won.

What do you think impressed the judges most about your interior work in Poltava?

I cannot really answer this question because the composition of judging panel is very cosmopolitan. There are 32 jury members from all over the world and they made the decision collectively, so it is impossible to say what specifically won them over.

How did you celebrate your success - with burgers or something stronger?

Well, I cannot provide details but I can confirm that following the awards ceremony, all of the nominees received invitations to a private after-party!

A decade or so ago, the Ukrainian restaurant design scene was dominated by ostentation and excess with an emphasis on glitz and mirrors. How are contemporary Ukrainian tastes changing?

Ukrainians have begun to travel more around the world and to encounter different contemporary styles. They now have a much better understanding of modern design concepts that is increasingly free from all the artsy-crafty elements and pretensions that used to dominate the Ukrainian scene.

What would be your dream interior design job in Ukraine?

I dream about design without design. When the essence and temper of the institution does not interfere with its focus and quality.

Which Ukrainian public buildings are most urgently in need of a complete interior design overhaul?

There are many such buildings. However, the main question is who will remodel them? In practice, the investor’s purse tends to dictate design priorities to corrupt architects, and many are all too glad to perform the dirty work. When you ask them why they do not refuse to carry out tasteless projects, the answer is typically: “if we don’t do it, then somebody else will do it instead.”

I think the majority of Soviet architecture that Kyiv inherited is much better and more modern than most of the so-called modern buildings constructed since 1991 from materials like drywall and alucobond. In Soviet times, the human role was perhaps more important, so everything was designed with user comfort and convenience in mind. Unfortunately, modern business centers and “elite” housing complexes tend to disregard these norms and ignore basic quality of life issues. These trends are evident in things like small halls, to say nothing of considerations for people with disabilities. Everything focuses on efforts to “squeeze” as much as possible out a project and make it more expensive to sell.

If we want to talk about specific Soviet era buildings that need a full contemporary redesign, I would immediately point to the so-called flying saucer building on Lybidska Square. You can also add Salut Hotel in Perchersk and Slavutych Hotel on Kyiv’s Left Bank to this list. Looking back to the pre-Soviet era, Besarabka Market in central Kyiv needs to adopt a more civilized and all-in-one design concept that would be in line with the kind of formats now popular for similarly historic market buildings in many other European countries. Kyiv has huge numbers of historic buildings that could potentially benefit from a complete redesign. The most important thing is to avoid damaging or losing what we already have. It might be worthwhile to study how our foreign colleagues are able to protect the historic identity of buildings and preserve their unique character while giving the structure new life and new functions.

Ukraine is emerging as a popular international filming location with many video producers and filmmakers attracted by the kitsch appeal of the country’s Soviet architecture. Are there any useful lessons that contemporary Ukrainian designers can learn from the Soviet school?

Yes, there is a lot to learn! Soviet architectural designs focused on people and centered on the convenience of all forms of communication and interaction in public places. Soviet architects also tended to attach great importance to qualities like proportion and the underlying rhythm of architecture, which often made the results they produced quite modern in style. By looking at the dynamics of the world and using minimal solutions, architecture can enjoy an entirely new lease of life.

What is next on the agenda for YOD Studio?

We plan to develop and deepen the process of creating new design concepts across the full extent of the hospitality sector. We are certainly looking towards American and Asian market entry. At the same time, we also remain fully committed to expanding our presence throughout all the regions of our native Ukraine.

About the interviewee: Volodymyr Nepyivoda is the director and founder of YOD Design Studio