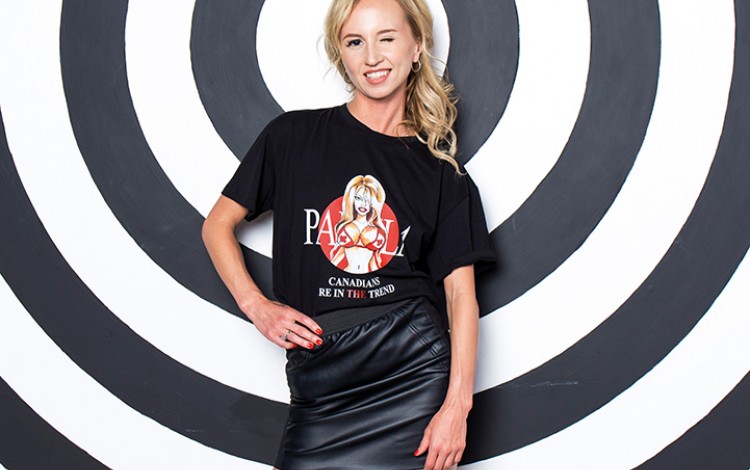 Amid the relentless global passion for British and American cult icons, fellow Anglosphere nation Canada is often somewhat overshadowed. The American stars-and-stripes and the British Union Jack flag can be found on everything from towels and T-shirts to snacks and sandals, while TV, pop and film stars from both countries are household names from Botswana to Buenos Aires. Despite often playing second fiddle to its southern neighbour and older brother, Canada is in many ways an ever more attractive proposition, representing the same civilizational ideals and cultural connections without bringing the kind of geopolitical baggage often associated with the US and the UK. In other words, Canada is cool without being controversial. One Ukrainian fashion designer is looking to capitalize on Canada’s relatively untapped pop art appeal with a range of funky and highly original T-shirt designs featuring tributes to the country’s biggest celebrities and variations of the iconic Canadian maple leaf national emblem.

Kyiv designer Kateryna Kropyvna launched her ‘Canadians are in the Trend’ series early in summer 2016 and is marketing them at her fashion showroom in Kyiv and via social media. Kropyvna explains that the range was inspired by her personal passion for Canada and says her target customers are fashion-conscious young Europeans looking for eye-catching and original street wear options. The eponymous Kropiva fashion label specializes in contemporary street style clothing with an emphasis on innovative yet casual cool, making the Canada theme an ideal fit. Initially, Kropiva will be offering the ‘Canadians are in the Trend’ range in black and white, with a choice of standard cut T-shirts and ‘boyfriend’ models designed with ladies particularly in mind.

The T-shirts are produced at a Kyiv Oblast textile manufacturing plant owned by the Kropiva brand’s parent company – a factor the designer says guarantees high quality while allowing for rapid production cycles. “It’s no secret that the plant handles everything from military uniform production for the Ukrainian state to the latest fashion collections from some of Ukraine’s biggest designer labels. This production capacity and professional expertize allows to us to produce high-quality T-shirts at short notice. The ‘Canadians are in the Trend’ range was conceived and produced in a very short space of time.”

Anyone hoping to pick up a Pamela Anderson tribute T-shirt will need to go online. The ‘Canadians are in the Trend’ collection will not be appearing in shopping centres or on Andriyivskiy Uzviz souvenir stalls anytime soon. “I’m a child of the fashion industry and I prefer to market my products in the most fashionable way, which today means social media,” explains Kropyvna. “I enjoy communicating with my customers directly and social media is the perfect platform for this. My brand is not about mass-market appeal. If you would like to order a T-shirt, I encourage you to send me a social media message personally.”

How did Kateryna go about selecting the stars featured in her Canadian cult T-shirts? After all, Canada has produced a dizzying array of A-listers including everyone from Star Trek’s Captain Kirk (William Shatner) to hockey legend Wayne Gretzky. She says it was all just a matter of personal taste. “As far as I am concerned, Jim Carrey, Justin Bieber and Pamela Anderson are a wonderful trio. I am simply delighted with them – especially by the way they look in my T-shirt designs. I’m sure these personalities will not leave anyone indifferent.”