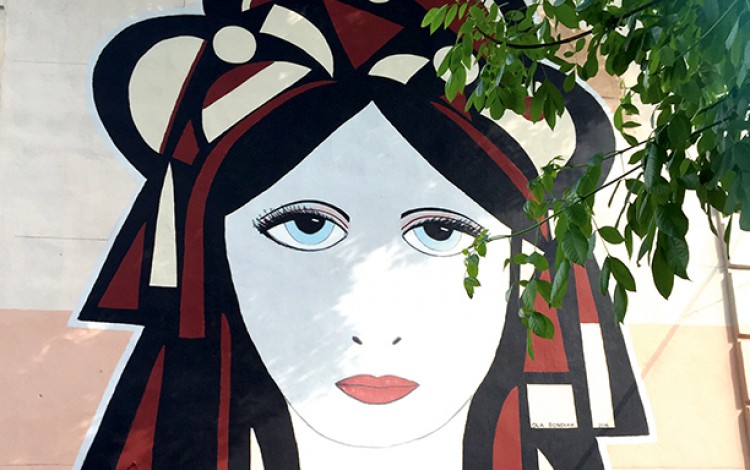 The winds of change are blowing through today’s Ukraine, and this post-revolutionary dynamic is having an impact on everything from high-level politics to street-level aesthetics. Visitors to the Ukrainian capital cannot help but notice that Kyiv is currently in the midst of mural mania, with examples of giant street art popping up throughout the city on a weekly basis.

The current trend towards public art first began to gain ground in the immediate aftermath of the Euromaidan protests in early 2014, with a number of individual efforts inspired by Ukraine’s national awakening. This enthusiasm for street art has since translated into a number of specific projects designed to decorate Kyiv, including 2015’s CityArt initiative, which resulted in the creation of 20 massive murals around town.

Buoyed by this success, the people behind CityArt have now launched ArtUnitedUs – a hugely ambitious street art initiative aiming to create a global movement boasting over 200 individual murals and centered on Ukraine. Some of the biggest names in the street art world have already been persuaded to travel to Kyiv and add their murals to the ArtUnitedUs initiative, with prominent local painters also participating.

One of the latest artists to contribute to the ArtUnitedUs project is American Ola Rondiak, who recently created one of her signature icon-style Ukrainian pop art portraits in Podil. Ukrainian-American Rondiak has lived in Kyiv for much of the past two decades, having grown up in a Ukrainian family in Ohio where she enjoyed a childhood immersed in the rites and rituals of the North American Ukrainian diaspora. An instinctive artist with a professional background in psychotherapy, Rondiak first took up painting during the 2004 Orange Revolution. Like millions of others who found themselves caught up in the heady emotions of Ukraine’s first post-Soviet revolution, she recalls how she sought a way to express the intensity of her feelings and found the process of painting to be therapeutic. “Painting was my emotional release,” she recalls.

Within weeks, the American’s original collages of Orange Revolution art were on sale on Maidan and she was giving interviews to the national media. It was to prove a life-changing experience, leading Rondiak towards a new career as an exhibiting artist. Her art is heavily influenced by Ukrainian folklore themes and focuses on portraits of Ukrainian women produced in a funky, contemporary style featuring plenty of the bright colours and floral touches traditionally associated with Ukrainian femininity. Her choice of subject matter is no accident – it reflects Rondiak’s admiration for what she terms as ‘the determined and inspirational women of Ukraine’, and the indomitable national spirit they represent.

The origins of this artistic obsession with iconic Ukrainian females also reflect Rondiak’s own personal family history. The artist’s grandparents found themselves separated by WWII, with her grandfather ending up in the United States while her grandmother languished in a Soviet labour camp. Despite suffering this tragic fate, Rondiak’s grandmother never lost touch with her humanity. Instead, she brought colour to camp life by embarking on her own artistic career, producing embroidery using potato sacks and random threads of material while employing fish bones as makeshift needles. Some of these incredible artworks even found their way to Rondiak’s family home in America, making a huge impression on the young Ola. “My grandmother found the strength to be creative, even after long days of hard labour. That had a profound impact on me,” she says.

Rondiak’s involvement in the ArtUnitedUs project came about following a meeting with project coordinator Geo Leros at the opening of her spring 2016 exhibition at America House in Kyiv. The works on display where inspired by Ukraine’s second post-Soviet uprising, the 2013-14 Revolution of Dignity, and featured more of Rondiak’s trademark pop art portraits and folklore motifs. Although a newcomer to the street art genre, Rondiak says she did not have to think long before accepting the invitation to contribute a mural. “I’d always been attracted to the thought of doing something really big,” she reflects, “but the idea of street art had never occurred to me.”

The American was offered a choice of locations before finally opting for a wall on Borysoglibska Street in Kyiv’s riverside Podil region. Her selection was partly down to a sense of vertigo that might have posed problems at some of the larger potential locations. “My street art niche is definitely one- and two-story buildings,” she quips.

The work on her Podil mural took three days to complete. Rondiak says she only received two negative comments from local residents over the three-day period, with one old timer claiming the use of black colouring would bring bad luck, while another felt the mural would attract attention to the poor state of the building itself. Most passersby were thrilled to see this new addition to the local landscape – a sentiment that the artist herself shares. “I see the explosion of street art in Kyiv as a reflection of the new Ukraine,” says Rondiak. “It is giving the city a far more contemporary feel and highlighting the social shift towards Europe that is currently underway.”

About the interviewee: Ola Rondiak is an American artist of Ukrainian ancestry. She has lived in Kyiv for the past two decades