UKRAINE ON THE GLOBAL STAGE

Ukrainian conductor Oksana Lyniv has spent much of her career in the conservative world of classical music challenging stereotypes and breaking down barriers. This July, she is poised to enter the history books again as the first female ever to conduct at one of classical music’s most celebrated events, the Bayreuth Festival in Germany 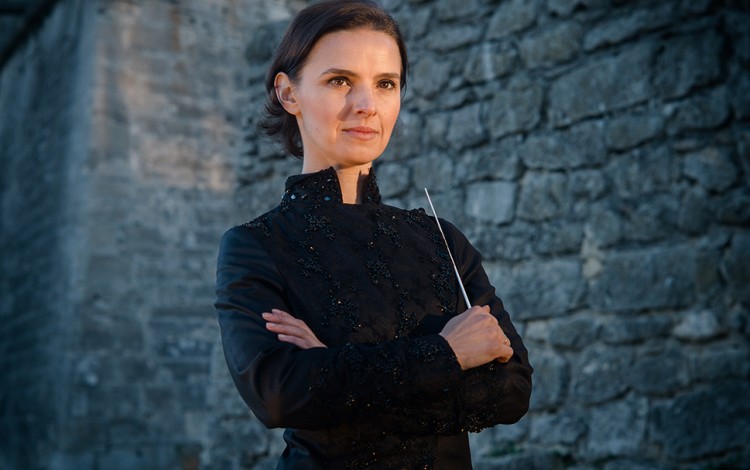 Ukrainian conductor Oksana Lyniv will make classical music history in summer 2021 when she becomes the first woman to conduct at Germany’s world-renowned Bayreuth Festival, which celebrates the works of the legendary Richard Wagner. Lyniv is set to open this year’s festival with a production of Wagner’s The Flying Dutchman.

Lyniv’s headline-grabbing star turn at the Bayreuth Festival is set to be the latest in long line of stunning achievements that illuminate the remarkable career progress of the 43-year-old native of western Ukraine. Born in Brody in 1978 into a family of musicians, she spent her childhood immersed in music before entering Lviv’s Music School in the early 1990s amid the upheavals of Ukraine’s fledgling independence.

The Ukrainian classical music star first conducted an orchestra at the tender age of 16. Despite reservations from some who felt there was little chance of building a serious career as a female conductor in a field dominated by men, Lyniv persevered. She gained her first international recognition in 2004, taking third place at an international conducting contest in Bamberg. This enabled her to continue her studies and gain further experience in Germany.

Lyniv significantly enhanced her reputation during an extended residency as associate chief conductor at Odesa Opera House that lasted from 2008 until 2013. While performing in Ukraine’s Black Sea port city, she won admirers for a number of daring premieres. Her career then took her back to Germany and the Bavarian State Opera.

The talented Ukrainian entered the classical music history books in 2017, when she became the first female to be named chief conductor of the Graz Opera and the Graz Philharmonic Orchestra. Lyniv’s upward trajectory has continued ever since. She is now widely recognized as an A-lister in the world of classical music, and was named Best Conductor at the OPER! Awards in Berlin in November 2020.

As she prepares for this summer’s Bayreuth Festival, Business Ukraine magazine spoke to Lyniv about her barrier-breaking career in classical music and asked her what she thinks Richard Wagner himself would have had to say about her upcoming historic appearance at the festival he founded almost a century and a half ago.

Oksana, you will make history this year as the first woman conductor ever to take the podium since the Bayreuth Festival was founded in 1876. What are your thoughts as youlook ahead to the festival?

Bayreuth is, of course, something akin to a sublime Olympus in the world of classical music. It is a very great honor for me to conduct at the festival. I am also acutely aware that as a conductor at such a prominent event, you are even more in focus and expectations will be exceptionally high. I am conscious of this responsibility and want to deliver the best possible performance of an opera that is very special to me personally.

How did the invitation to perform at Bayreuth come about - was it something that had been discussed for a long time, or did it come as a surprise?

I cannot give you an exact answer as to when the idea first began to take shape, but I can confirm that the invitation was not recent news for me. I think that the management team of the Bayreuth Festival first noticed me during my time at the Bavarian State Opera [Lyniv joined the conducting staff in 2013]. In any case, by 2018 I had already received the invitation to conduct the Flying Dutchman in 2021.

What do you think Richard Wagner would have thought about the decision to finally invite a female conductor to star at the Bayreuth Festival?

Richard Wagner occupies a very special special place in the world of classical music. In the former Soviet Union, where I was born, his music suffered from negative connotations due to associations with Germany and WWII. As a result, I rarely encountered Wagner during my childhood years.

The first thing I remember hearing about Wagner was during my college days, when I was told that one of the reasons he was performed so rarely was because his operas were so long and too complicated. But this complexity was precisely what spurred me on to get to know him as a composer. I would sit for days pouring over piano reductions of his operas borrowed from the library and listening to old vinyl records, totally absorbed in his masterpieces. At the time, I could not have dreamed that one day I would be able to conduct Wagner’s operas myself.

The fact that I will be the first ever woman to conduct at this magical place is very special indeed for me. In most of his operas, Richard Wagner wrote key roles for women and typically depicted them in an extremely emancipated manner. That is why I genuinely believe he would be proud to know that, almost 140 years after his death, the honor of bringing his wonderful music to life at his festival will finally fall to a woman.

You have had a groundbreaking career so far and were also the first female to be named chief conductor of the Graz Opera and Graz Philharmonic Orchestra. Did youconsciously set out to challenge gender barriers and stereotypes in the classical music world?

Ever since I started out on my path as a professional conductor when I was 18 years old, I have always aimed high. At the same time, I cannot say that I have consciously sought to challenge of overcome any particular gender stereotypes along the way. For me, the main motivation has always been a sincere passion for classical music and a sense of awe at the profession of conductor. Being able to lead the performance of the world’s greatest musical masterpieces is a dream come true, and I have been consumed by this calling since my early student days. I am also conscious of the huge responsibility that comes with pursuing a career as a conductor. In order to be a top conductor, you must be a leader and a professional in every sense. There are no gender or age privileges in this profession.

How conscious are you of your position as a role model for girls looking to become conductors?

I am always happy whenever I can help, inspire, or share my experience with the younger generation. Naturally, this also applies to young ladies who are interested in becoming conductors. When I was a student, there were no such role models for me to study or take inspiration from. During the challenging early years at the very beginning of my career, there weren’t any female conductors in my country who I could look up to, and not even any other female classmates studying alongside me. At the time, it was not something that really bothered me. It just seemed normal, so I didn’t dwell on it. If anything, it made me even more determined to develop myself and learn as much as a possibly could.

While I am pleased if I can serve as a role model for emerging talents, it saddens me that many potential future conductors and musicians have been unable to gain priceless experience over the past year due to the restrictions imposed as a result of COVID-19. This pandemic period has surely done a lot of damage to talents that might otherwise have been destined to emerge as the great stars of the classical music scene in the years ahead. The formative experiences that they have been deprived of over the past year can never be truly compensated.

You are one of Ukraine’s most successful and high-profile cultural ambassadors. What does this status mean to you and how do you seek to represent Ukraine on the international stage?

Representing Ukraine to global audiences and promoting culture inside Ukraine itself are both very important missions for me. Ukraine spent hundreds of years without statehood or sovereignty. This long struggle for national self-determination has inevitably had a very sad and negative impact on Ukrainian culture, especially in terms of music. As a result of the country’s troubled past, today’s Ukraine remains relatively unknown to the outside world, even in nearby Europe.

My goal is to introduce international audiences to Ukrainian composers, Ukrainian music, and Ukrainian talent. We have so much to be proud of culturally and so much to offer to the rest of the world. This was the thinking that motivated me to organize and lead two classical music projects, the LvivMozArt international classical music festival in Lviv and the Youth Symphony Orchestra of Ukraine. The Youth Orchestra initiative brings together young musicians from across the country in what has become Ukraine’s most internationally successful youth ensemble.

What is your advice to young Ukrainians considering a career in classical music?

I would tell them that the key to success is to constantly push the boundaries of their own abilities and possibilities. Never stop learning. Challenge yourself with ambitious goals and try to create your own daring projects. Knowing how talented they are, I wish more young Ukrainians saw themselves as competitive on the global stage. In recent years, I have seen a lot of amazing young Ukrainian musicians secure places at some of the world’s top muscial academies in London, Madrid, Berlin, Tel Aviv, and beyond. I follow their careers and try to keep in contact with many of them, because I understand how important this kind of professional and personal support can be for young people.