Why Kyiv is the New Berlin 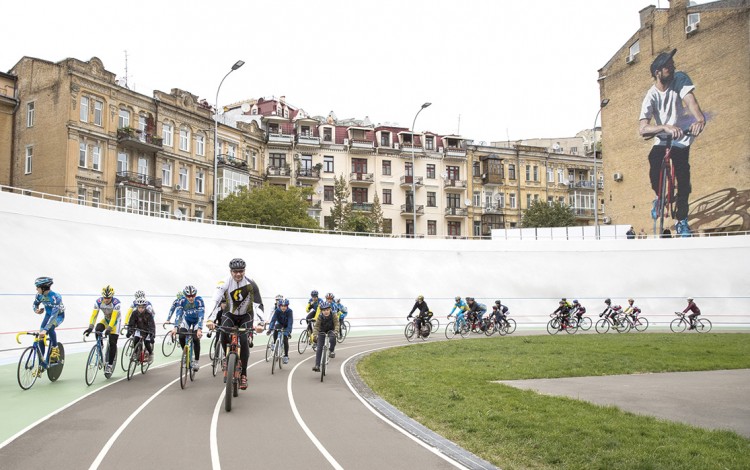 A giant mural of a cyclist looms over the recently renovated Kyiv Velodrome in the heart of the downtown area. The velodrome reopened to the public in 2017 as part of extensive urban renewal efforts in the Ukrainian capital
Susanna Dickinson, Business Ukraine magazine

“Here’s why Kyiv should be your next city break” ran the headline earlier this year in London’s Standard newspaper. Such glowing coverage is becoming increasingly commonplace in the international media as the outside world discovers the charms of the Ukrainian capital. The 2013-14 Euromaidan Revolution may have thrust Kyiv into the global spotlight, but it took subsequent successes such as the 2017 Eurovision Song Contest and the 2018 UEFA Champions League Final to convince international audiences that there is much more to Ukraine’s biggest city than revolutionary drama.

This epiphany was arguably long overdue. Ukraine has experienced a national reawakening since 2014, with the political upheavals of Euromaidan and the ongoing crisis of Russian aggression fueling a surge in patriotic sentiment that is nowhere more evident than on the streets of the country’s capital. There is a tangible sense of swagger about post-Euromaidan Kyiv, with a vibrant contemporary arts scene and internationally acclaimed fashion industry setting the tone for a city that is enjoying the limelight after decades in the geopolitical dark. Kyiv designers are now headline-grabbing attractions in Paris and Milan, while Ukrainian pop stars like Kazka storm the Shazam Global Top 10.

This growing self-confidence is also evident in everything from Kyiv’s creative cafe culture to the city’s booming IT industry, which is transforming the entire profile of the regional economy. As a result, a place that once served as the poster boy for post-Soviet provincialism is now becoming synonymous with startup savvy. Many compare the current Kyiv vibe to the mood in newly reunified Berlin, which emerged in the 1990s as the unofficial hipster capital of Europe. Here are five reasons why the Ukrainian capital has one of the strongest claims to Berlin’s hipster crown.

There was a time when the Kyiv clubbing scene was all about gangster chic and icy supermodel ostentation. In those dark and decidedly undemocratic days, rudeness was a virtue and status was a weapon. The era of golden interiors and frosty receptions is now thankfully long gone, with nocturnal Kyiv currently becoming better known for the skill of its barmen and the inventiveness of its ever-expanding cocktail menus. From laidback live music to all-night raves, the Ukrainian capital has a remarkably varied selection of nightlife options and enjoys a burgeoning reputation as one of Europe’s top party towns.

The patriotic wave that swept Ukraine in response to Russia’s 2014 invasion sparked a surge in demand for all things “Made in Ukraine”. As the “Made in Ukraine” movement gained momentum, it became increasingly apparent that many Ukrainian products were more than capable of competing with their international alternatives. Entire department stores have since sprung up to cater to this newfound enthusiasm for locally produced items, with stock ranging from street fashions to furniture and kitchen utensils. In a world of increasingly globalized identikit consumerism, the “Made in Ukraine” craze has provided a refreshing change. It also offers visitors some excellent souvenir ideas.

One of the most visible manifestations of Kyiv’s post-Euromaidan embrace of hipster status is the remarkable rise of street art throughout the city. In Soviet times, the Communist Party commonly employed giant murals to promote proletarian themes and totalitarian messages. Today’s explosion of eclectic Kyiv street art could hardly be more different. The result of diverse efforts by dozens of different artists and various organizations, it has evolved organically since 2014 to become one of Kyiv’s newest tourist attractions. Many of the most celebrated mural painters from across the world have come to the Ukrainian capital over the past four years to add to the city’s street art collection, reflecting the international interest the trend has managed to generate. Unsurprisingly, street art tours are now a regular feature offered by most Kyiv tourism companies.

The Kyiv restaurant scene has experienced a dramatic rise in both quality and variety over the past four years without suffering an accompanying hike in prices. The result is a dining out environment that can rival many of Europe’s more established gastronomic destinations at what is often a fraction of the cost. Kyiv’s restaurant renaissance also embraces ambience, with new venues typically offering tasteful interiors and stylish dish presentation that are both in many ways ahead of their European peers. Perhaps most remarkably of all, service standards have undergone a quantum leap away from the sullen and sulky “Soviet scowl” approach that characterized the service industry in 1990s and 2000s Kyiv. Instead, today’s dining out experience typically comes complete with professional and attentive service staff who actually appear to enjoy their job.

If the above factors are not enough to entice you, Kyiv’s trump card is the fact that it offers the best value for money of any capital city in Europe. The devaluation of Ukraine’s hryvnia currency in 2014-15 has brought prices crashing down for those with international currency. As a result, everything from dining out to booking a taxi is now remarkably cheap, while at the same time standards have remained high. For international visitors with dollars or euros to spend, this creates the perfect combination of European quality at emerging markets prices. The one weak link in Kyiv’s budget destination appeal used to be the lack of affordable flight connections. However, the recent arrival of Ryanair on the Ukrainian market, coupled with the rapid expansion of services by other budget carriers such as Wizz Air, is helping to make the Ukrainian capital reachable for the kind of fares that will attract a new generation of European weekenders. As word continues to spread, expect to see many more rave reviews of Kyiv in the international media throughout 2019.