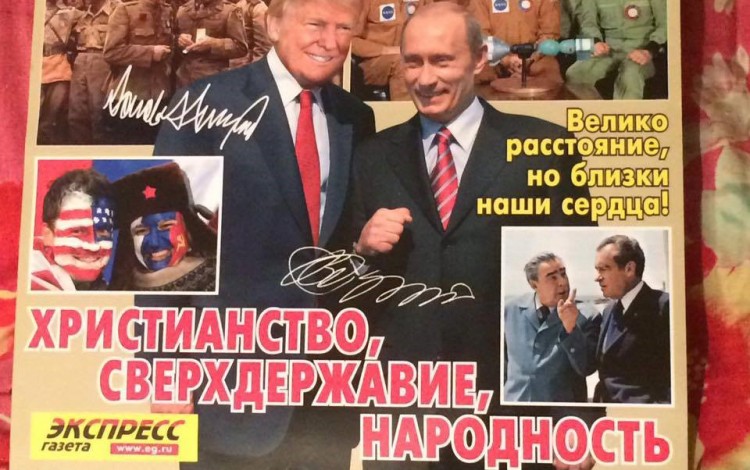 US president-elect Donald Trump recently claimed Vladimir Putin's friendship would be 'an asset, not a liability’. This latest statement has done little to ease concerns the incoming White House administration will seek a pragmatic alliance with the Kremlin. Trump sees himself as the supreme dealmaker, and he appears to believe a deal with Putin is not only possible but also desirable.

Such grand bargaining threatens to upset the entire geopolitical balance of the past three years, rupturing the carefully constructed US-EU alliance opposing Russian aggression in Ukraine. A geopolitical breakthrough of this nature would also suffice to revitalize Putin’s weakened regime. Indeed, the remarkable rise of America’s next president could hardly have come at a better time for Moscow. Nevertheless, it remains unclear how American interests would benefit from an accommodation of modern Russia’s imperial ambitions. While Donald Trump’s public infatuation with the Russian leader has grabbed all the headlines, it is obvious that Putin needs Trump a lot more than Trump needs Putin.

Despite a string of recent foreign policy successes culminating in the election of Donald Trump, Putin’s current position is deceptively weak. For at least the past year, his empire has been tittering on the brink of deep domestic instability. Many within the Russian elite regard his current presidential term as a major failure and dread to think of what could be lurking over the horizon. Russia’s economy has already been in recession for five years. Wages have tumbled. The country's once-bountiful national reserve funds are approaching exhaustion. International investment has slowed to a trickle. The oligarch classes are becoming increasingly nervous. Poverty has become so widespread and visible that even government officials have had to acknowledge it.

Nor is there any end in sight. On the contrary, the illusion of endless economic improvement has been shattered. During the 2000s, Putin reaped the benefits of skyrocketing global oil and gas prices, but the market declines of the past two years have exposed Russia’s continued dependence on energy exports. Western sanctions have exasperated these economic problems, denying Russia access to all-important technologies and finance. For millions of ordinary Russians, the rising living standards experienced during the first decade of Putin’s rule are now becoming a distant memory. Many pundits believe fear of a return to the grinding poverty of the 1990s is all that stands between the Kremlin and open revolt.

Putin's much-trumpeted foreign escapades have also produced a series of unwelcome results. Things began well enough in February 2014, when he succeeded in seizing Crimea – an audacious feat that caught the entire world by surprise and allowed him to claim his place on the Parthenon of Great Russian Heroes. However, the conquest of Crimea created dangerously inflated expectations he has been unable to meet. Whipped up into a patriotic frenzy by the Crimean triumph, Russian TV viewers waited breathlessly for the resurrection of the Soviet Union and reunification with their “brothers” on the opposite side of the Russian-Ukrainian border. Instead, it soon became clear Ukrainian popular support for Putin was actually far lower than his sycophantic advisors had seemingly suggested.

The vast majority of Ukraine’s ethnic Russian population remained loyal to Ukraine, with many taking up arms to defend the country against Russia’s hybrid invasion. Russian-backed proxy armies ran into unexpectedly stiff opposition and retreated. As the media hysteria of the initial “Russian Spring” died down, it became harder and harder to disguise this as anything but a humiliating defeat. Putin stopped paying public homage to the heroes of “Novorossia” (literally “New Russia” – the term used by the Kremlin and its proxies to refer to the regions of Ukraine it sought to incorporate into a new puppet state), and Russian state television abruptly dropped its blanket coverage of “Ukrainian Nazis”. This virtual stalemate has lasted for the past two-and-a-half years, with Putin apparently unable to manufacture a face-saving way out.

In September 2015, Russia entered the Syrian conflict as a means of changing the geopolitical conversation and diverting attention away from the Ukrainian quagmire. This intervention has allowed Russia to elbow its way back to the top table of international politics, but the costs of this success have been high and continue to rise. Russia currently finds itself trapped in a conflict that increasingly resembles the disastrous 1980s Soviet campaign in Afghanistan – a debacle that played a major role in the collapse of the USSR. Like Afghanistan, it threatens to become a drain on Kremlin finances while also demoralizing the population and undermining domestic support for the regime. Meanwhile, atrocities such as the carpet-bombing of Aleppo and the attack on a UN aid convoy have led to widespread international accusations of war crimes.

Meanwhile, Russia’s hybrid spoiler campaigns in the EU and US have added to the growing tensions between Moscow and the Western world. The Kremlin currently appears to hold the upper hand, with a combination of hacking, information attacks, and fake news helping to secure spectacular successes such as the Brexit vote and the Trump election victory. However, such tactics are increasingly forcing Western governments to recognize Russia as an enemy rather than a potential partner. Countries across the EU are now setting up anti-disinformation organs and slowly but surely responding to the challenges of Russia’s recent hybrid war innovations. This response is long overdue, but it also prove decisive. The politically pluralistic democracies of the developed world cannot keep pace with the decision-making speed of dictatorships, but once they have determined a clear foreign policy course, it tends to be far harder for adversaries to resist.

The self-inflicted economic and foreign policy wounds of the past three years have placed a heavy strain on Putin’s contract with the Russian nation. Many in the Kremlin now hope the Trump presidency can provide the miraculous turnaround Putin needs. They dream of a new Yalta Agreement, with Putin and Trump carving up the world into spheres of influence just as Roosevelt and Stalin did in 1945.

Cooler heads acknowledge that American and Russian interests collide on too many issues for any such deal to succeed. The US has a long history of siding with politically unsavoury but useful dictators ranging from Nicaraguan President Somoza to the Shah of Iran, but it is hard to see exactly what Putin has to offer his potential American suitors. What can the Russian leader offer Trump in return for a free hand in Ukraine and the rest of the former Soviet region? Some see the Kremlin as capable of restraining China, but it remains unclear how the fifteenth largest global economy can contain the number two economic power on the planet.

The most common justification for a Russia-US deal is the idea of a grand alliance against ISIS. Putin himself has put forward this argument, but Russia’s failure to combat ISIS in Syria has left such talk looking somewhat hollow. Russia’s record on fighting terrorism domestically is also sketchy. Religious extremism has mushroomed in Russia’s North Caucasus region and elsewhere in the country since the end of the Second Chechen War, despite the payment of huge sums to the nominally loyalist Chechen authorities. It is no coincidence that Russian is one of the most commonly spoken languages among ISIS combatants.

The Trump administration has little to gain from a deal with Russia, beyond the possibility of a pause in the current round of hybrid hostilities. This would likely provide mere temporary relief. Any entente would only serve to reinvigorate the Putin regime, paving the way for further international aggression once new opportunities presented themselves.

Putin has little choice but to maintain the current hybrid war. He is no longer able to provide the Russian people with the prosperity he once promised, making him increasingly dependent on foreign policy distractions. He needs the siege mentality of constant conflict against existential enemies. While Putin is prepared to seek temporary accommodations that will provide his administration with some desperately needed breathing space, he cannot make peace with the West without risking his own political future.

Donald Trump must now navigate his through this complex foreign policy environment. He has made matters even more complicated with his pro-Putin rhetoric, but Trump can still surprise his detractors by adopting a sensible policy of containment towards the Kremlin. His choices for the top-tier positions in his new administration would appear to favour a tough stance on Russia, while Trump’s own record of reversing positions on key issues also suggests that the Kremlin may have uncorked the champagne prematurely. Nevertheless, the idea of an historic deal with Putin doubtless remains deeply alluring to Trump, appealing to his needy ego and fitting perfectly with his no-nonsense approach to practical policy solutions. This calls for clear heads in the White House. Any agreement would have dire consequences for frontline nations like Ukraine, Moldova, and the Baltic States. It would also set a disastrous precedent for international relations in general, while offering the US very little in return and dramatically undermining Washington’s prestige. This would be a bad deal for America and a bad deal for President Trump himself.

About the author: Fedor Klimenko is Russian political activist and journalist living in exile in Kyiv. He is Editor of the Russian Monitor (rusmonitor.com) online magazine