BATTLE OF DONETSK AIRPORT: Ukraine’s Cyborgs – defenders of Donetsk airport who defied the Kremlin and inspired a nation

The heroic defense of Donetsk International Airport became Ukraine’s Alamo, capturing the world’s imagination and sending out a powerful message that Ukrainians would fight for every inch of their country 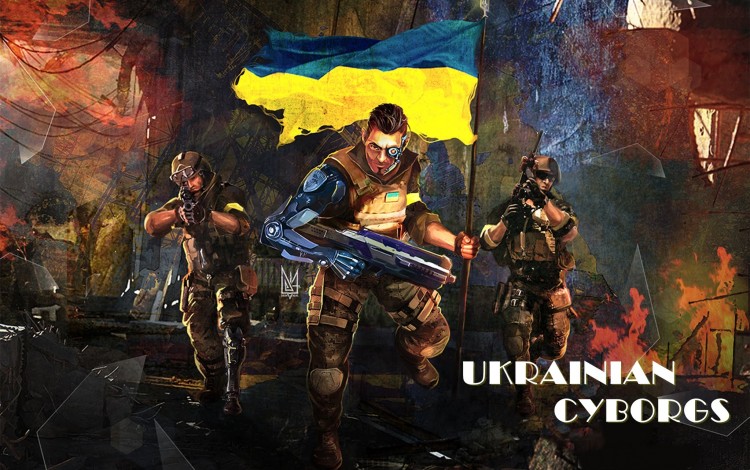 One year ago this month, the Battle of Donetsk International Airport reached a gruesome climax. After over 240 days of defiant and against-all-odds defense, the airport finally fell to combined Russian-separatist forces. Dozens of Ukrainian defenders died in the last days of the battle. Many perished in the rubble following the collapse of one of the few remaining ceilings in the airport terminal complex. Others died in the kind of desperate hand-to-hand fighting that had characterized the entire battle. By this stage, the airport itself was an uninhabitable lunar landscape, reduced to ruin by some of the most intense fighting witnessed in Europe since the fall of Nazi Berlin in spring 1945. This was the last stand of the ‘Ukrainian Cyborgs’, the name given to the seemingly superhuman defenders of Donetsk International Airport by their exasperated opponents.

For those who survived the fighting but failed to escape the wreckage of the airport, captivity meant public humiliation on the streets of Donetsk and months of sadistic abuse in the basement torture chambers of Russian-occupied east Ukraine. There were widespread reports of summary executions. One year on, the fate of some of the Ukrainian defenders remains unknown. It was a demoralizing end to what had been an epic example of military skill, Ukrainian patriotism and old-fashioned fighting spirit.

Icons of the new Ukraine

This macabre and traumatic finale should not overshadow the importance of the defense of Donetsk International Airport in the annals of Ukrainian history. The battle was ultimately lost, but its role in consolidating the Ukrainian war effort and bolstering national morale cannot be overstated. Much as the doomed nineteenth century defenders of the Alamo have come to be seen as flag bearers of America’s national identity, the Cyborgs of Donetsk airport are destined to be icons of the new Ukraine.

As Ukraine marks the first anniversary of the fall of the airport, this national importance is already becoming clear. President Poroshenko has heaped praise on the Cyborgs, awarding posthumous medals to the families of those who died in the battle and declaring a day of national remembrance. Ukrainian TV schedules are currently crammed with Cyborg documentaries and Donetsk airport anniversary programming. Ukraine’s social media sphere is also full of Cyborg-related posts and tributes. There is even talk of a Hollywood blockbuster based on one of the many books published about the battle.

Why did the defense of Donetsk airport capture the nation’s imagination? To understand its psychological importance, it is crucial to appreciate how precarious Ukraine’s future existence appeared throughout the Battle of Donetsk International Airport. When Russia launched its hybrid war against Ukraine in spring 2014, Russian President Vladimir Putin explicitly identified eight Ukrainian Oblasts as potential targets, representing almost 20 million Ukrainians and more than half of the country’s industrial wealth. If Russia had succeeded in occupying these regions, Ukraine would have ceased to exist as an independent state.

Kremlin uprisings were initially only successful in Donetsk and Luhansk regions, but the threat of a major escalation remained. Indeed, separatist leaders often spoke openly of their desire to seize Mariupol, Odesa, Kharkiv, and a range of other Ukrainian cities. There was little confidence that Ukraine would be able to defend itself against a concerted Russian-backed push for more territory. Despite making moderate progress against separatist forces throughout summer 2014, Ukraine’s military was still a patchwork force made up of semi-autonomous volunteer battalions and poorly equipped army forces. The introduction of large numbers of regular Russian troops in late August had confirmed many people’s worst fears, sending Ukraine’s makeshift army reeling back in confusion. There had been a massacre at Ilovaisk, while Russia’s hybrid army had advanced virtually unopposed to the gates of Mariupol. Ukraine appeared to be at the mercy of the Kremlin.

Faced with impending disaster, Ukraine signed up to the first Minsk peace process. However, this humiliating reverse failed to provide the expected respite. Fighting continued in flare in east Ukraine, with Donetsk International Airport quickly emerging as a focal point. The airport was strategically and symbolically important for both sides. It served as the last remaining Ukrainian foothold in the city of Donetsk, while also preventing Russia from resupplying its proxy forces via air.

As the battle raged, media attention began to build. It soon became clear that something remarkable was taking place. Russian forces would launch assaults on an almost daily basis, only to be repelled. Despite being exposed to constant enemy fire and virtually surrounded, the Ukrainian defenders of the airport continued to hold out. The seemingly remorseless advance of Russia’s hybrid army had stalled.

I was managing a Ukrainian 24-hour TV news channel throughout the Battle of Donetsk International Airport and can vividly recall the obsessive interest the battle generated in the newsroom. News journalists tend to be a remarkably cynical bunch who treat death and disaster as unremarkable everyday events. Individual stories may occasionally make an emotional impact, but this initial sense of shock rarely lasts beyond the first 24-hour news cycle. Donetsk airport was different. It was clear from the first weeks of the confrontation that we were witnessing an epic unfolding before our eyes. Every single day, work would grind to a temporary halt as the latest news from the airport was conveyed. Correspondents who had actually been to the airport where treated as exulted ambassadors. Cyborgs on leave who visited the newsroom generated a sense of awe. For the first time ever, Ukraine’s armed forces were creating a legend. After centuries of defeat, infighting, occupation and genocide, here was a tale of genuine Ukrainian military glory.

This reaction was not limited to my newsroom. Across the country, Cyborg mania soon caught on. The defense of Donetsk International Airport gave Ukrainians something to believe in. Located in the very heart of the Russian-occupied zone, it represented a supreme act of defiance and military dexterity. It served to counter fears that Ukrainians were no match for Russia’s hybrid army, or that Ukrainian troops had no stomach for a fight. It was the psychological turning point in the entire conflict.

Militarily, the value of the Battle of Donetsk International Airport is less clear-cut. Some, including President Poroshenko, have argued that the battle prevented Russia from seizing the remaining two-thirds of Donetsk Oblast. This may well be the case, given the momentum of the conflict in late 2014. What we can say with certainty is that the eventual fall of the airport has not resulted in any major shift in the frontlines of east Ukraine. Ukrainian forces remain entrenched in Pisky, the village that previously served as the supply base for the defenders of the airport. In retrospect, the airport was probably more important symbolically than strategically. Its capture was unquestionably a coup for Putin’s proxy forces, but even their deliberate attempts to degrade the captured Cyborgs have not succeeded in dimming the luster of their legend.

Heroes make nations and wars make heroes. The Cyborgs who defended Donetsk International Airport will likely play this role in the future development of Ukraine’s national identity. The ranks of the Cyborgs included ordinary Ukrainians hailing from across the country, encompassing a range of ethnicities, religious groups and native tongues that is entirely typical of today’s multicultural Ukraine.

Their sacrifices convinced the world that Ukrainians would fight to the death to defend Ukrainian land. Perhaps even more importantly, they gave their fellow Ukrainians something to believe in during one of the darkest periods in the country’s long and often tragic history. Millions played their part in Ukraine’s miraculous 2014 survival, but the Cyborgs look destined to claim the headlines.