EDITORIAL: Ukraine's European identity does not depend on Brussels 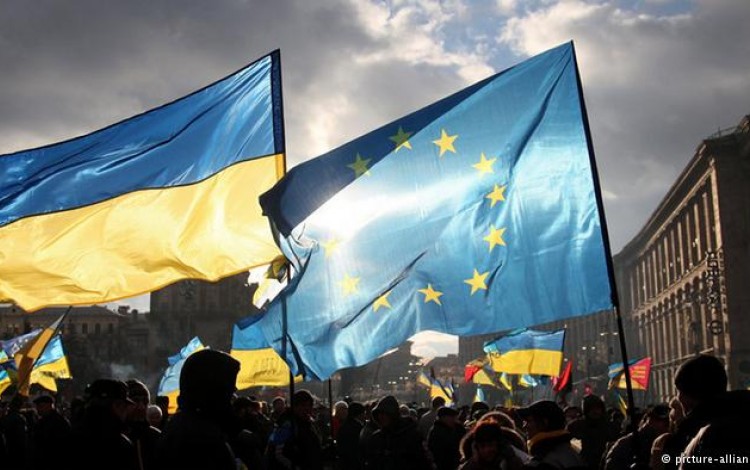 EU symbols on Maidan: Ukrainians protested during Euromaidan under the flag of the European Union but the success or failure of the revolution does not depend on EU membership
Peter Dickinson, Business Ukraine magazine

Does Ukraine have any chance whatsoever of becoming an EU member state? The jury is still out on this issue, but most observers regard it as highly unlikely. The EU is too bloated, Ukraine is too big, and Russia is too Russian.

The absence of a future membership perspective is frequently cited as a psychological barrier to the far-reaching reforms Ukraine so desperately needs. There is certainly some truth to this assertion - anyone who has witnessed Ukrainians mobilize to meet the target date of a major national holiday will confirm the  galvanizing effect a clear and coherent objective can have on the country. This hangover from the authoritarian habits of the Soviet era is entirely understandable, but it is not always very helpful. All too often, the lack of a concrete date or checklist can serve as an excuse to do nothing. The current absence of an EU membership perspective must not be used as a reason to scale down the already disappointingly slow reform agenda in the country.

EUROPE AS AN ABSTRACT IDEAL

With no EU roadmap on the horizon, it would probably be a good idea if Ukraine's political leadership stopped talking about future membership entirely. Instead, they should focus on the far more appropriate objective of building a modern European state. After all, when Ukrainians speak approvingly of a European future, they are not expressing their admiration for the distinctly Byzantine Brussels bureaucracy, or marveling at the wonders of the EU's Common Agricultural Policy.

To the average Ukrainian, Europe is simply a byword for the 'normal country' they dream about. In this context, ‘Europe’ serves as a semi-mythical place where things actually work as they are supposed to. It is a shorthand synonym for democracy, equal opportunities, and the rule of law. Creating such a society in Ukraine is undoubtedly a Herculean task, but there is no need to wait for the green light from Brussels before trying.

Nor is it clear whether EU membership is even in Ukraine's best national interests. Free trade and freedom of movement both hold obvious appeal, but becoming a fully paid up EU member state could actually prevent Ukraine from capitalizing on the natural advantages derived from its status as one of the world's great borderlands. While the term 'buffer state' is rightly perceived as derogatory and demeaning, modern Ukraine's geographic location and historical inheritance make it tailor made for the role of commercial and diplomatic bridge between Europe, Eurasia, and the Middle East.

FROM MAIDAN TO MEMBERSHIP

The debate over Ukraine's geopolitical strategy will necessarily rumble on for many years to come. As this conversation continues to evolve, arguments for and against the pursuit of EU membership should not be confused with the far more definitive issue of the country's European civilizational choice. The EU flags on Maidan reflected the sense of European identify felt by the overwhelming majority of Ukrainians, but the success or failure of the revolution does not hinge on EU membership. The millions of Ukrainians who took to the streets during Euromaidan and joined the fight back against Putin's hybrid war did so because they wanted to live in a society shaped by European values. This can be achieved without the benefit of action plans from Brussels.