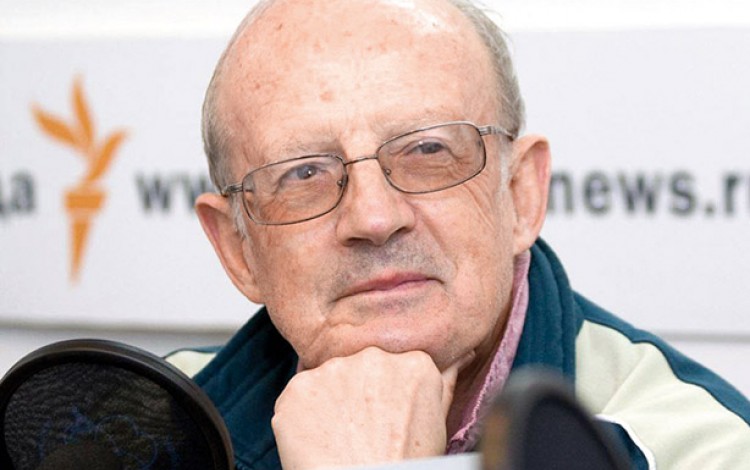 About the interviewee: Andrey Piontkovsky is a Russian political analyst and commentator
Fedor Klimenko

Russia’s hybrid war in Ukraine is currently entering its third winter with no end in sight to a conflict that has already caused over 10,000 deaths and displaced millions. The war in Ukraine has escalated into the biggest international confrontation since the end of the Cold War, with the Western world imposing sanctions on Russia and Moscow responding by expanding its hybrid war tactics to North America and the heart of the EU. Tensions have mounted to such an extent that some commentators have felt justified in prophesizing the impending outbreak of World War III.

Russian political commentator Andrey Piontkovsky says such interpretations are not entirely accurate. As far as he is concerned, the theorists in the Kremlin believe they are already engaged in fighting World War IV. Piontkovsky, who has a long record as a critic of the Putin regime, is currently living in exile in the US. He spoke to Business Ukraine magazine about the miscalculations behind Putin’s attack on Ukraine and explained why he believes reconciliation between the Ukrainian and Russian nations will have to wait until Putin is no longer in control of the Kremlin.

Russia appears to have abandoned its efforts to create ‘Novorossia’ in southeastern Ukraine and effectively partition the country. Do you think there is any danger of the Kremlin reviving these efforts?

Putin’s overriding objective is to prevent Ukraine from becoming a success story. He must stop the country from progressing along a European trajectory and developing a transparent political and economic system. I believe the Kremlin has finally concluded that there is no way to achieve the military conquest of Ukraine. This has meant abandoning the idea of creating ‘Novorossia’ by incorporating vast swathes of Ukraine including Kharkiv, Odesa, and Dnipropetrovsk Oblasts. They have reached this conclusion because earlier expectations that ethnic Russians in Ukraine would support the so-called ‘Russian World’ proved false. This represents a humiliating defeat for the Kremlin – I would even call it a metaphysical defeat – because the majority of ethnic Russians and Russian-speaking people stayed loyal to Ukraine and not Putin. Nevertheless, although the Kremlin has abandoned the idea of creating ‘Novorossia’, Putin will not stop trying to do as much harm as possible to Ukraine. He will continue to throw a spanner in the works at every opportunity.

The Kremlin’s new objective is to seduce President Poroshenko with promises to restore the territorial integrity of the country by taking the two separatist enclaves back into Ukraine. This would mean accepting all manner of Russian criminals and puppets into Ukrainian political life on the Kremlin’s terms. Putin hopes this maneuver will allow him to maintain control over the situation in the so-called DNR and LNR (unrecognized separatist republics in eastern Ukraine – Ed.) as well as the borders between Russian and Ukraine’s Donbas region. These regions would become a tool to block European-style reforms in Ukraine and undermine the country from within.

To achieve these goals, Putin has sought to use Western leaders. This approach has brought results. German Chancellor Angela Merkel, French President Francois Hollande and other key European players are all currently putting pressure on Ukraine. They are telling Kyiv to accelerate the implementation of the Minsk agreements and change the Ukrainian constitution to grant ‘special status’ to militant-controlled parts of east Ukraine. Maybe they expect to receive the Nobel Peace Prize. I don’t know what is motivating them, but the fact remains that these messages to Kyiv are all grist for Putin’s mill. Naturally, Ukraine can never accept these terms. This means the tug of war over the implementation of the Minsk agreements will continue for as long as Putin remains in power. He cannot simply step back and withdraw Russian troops from the Donbas, not mention the issue of returning Crimea. Anything of that nature is politically impossible for Putin.

The Russian hybrid war in Ukraine has shattered the myth of ‘fraternal nations’ and left bilateral relations in ruins. However, history is full of examples when even the deadliest of international rivalries has eventually given way to reconciliation. How can reconciliation take place between Ukraine and Russia, and what kind of relationship do you see emerging in the decades to come?

I am afraid that the process of reconciliation between Ukraine and Russia will take a long time. If we look to European history for a guide, we know that the process of reconciliation between France and Germany took hundreds of years and involved a long series of wars. A more recent example would be the Serbs and the Croats, who continue to feel deep animosity towards each other. I still hold out hope that in the case of Russians and Ukrainians, there will not be too much hatred in the future relationship. However, nobody will make pronouncements about brotherhood or fraternity anymore. Any talk of reconciliation necessarily refers to the post-Putin era. While Putin remains in power, improvements in bilateral ties are impossible. Even if Putin leaves and Russia retreats from the Donbas, negotiations over the status of Crimea will likely last for decades. I can only assume that whoever comes to power in Russia after Putin, they will try to maintain control of Crimea for as long as possible. This will act as a long-term obstacle to any future thaw in bilateral relations.

You mention Germany and France. It is worth recalling that Germany was only able to establish friendly ties with France after suffering humiliating defeats in two world wars. This led to major democratic changes within Germany itself. Can you foresee similar processes taking place in Russia?

It is possible. In Russia, far-reaching changes only occur following a major defeat. This was the case after the Crimean War, the Russo-Japanese War, and the Cold War. Any retreat from Ukraine would symbolize Russia’s defeat in the current hybrid war that Putin’s theorists like to refer to as World War IV.

You were one of the few people to predict Russian aggression in Ukraine prior to the seizure of Crimea. Why do you think Putin was able to take the world by surprise so successfully?

That is quite easy to explain. As I have already said, Putin and his theorists see the current confrontation as World War IV. Why the fourth world war and not the third? They regard the Cold War as WWIII. There are clear parallels with post-Versailles Germany and Hitler’s attempts to take revenge for the German defeat in WWI. Putin’s so-called Crimea Speech to the Russian Duma in March 2014 was a more or less exact copy of Hitler’s Sudeten Speech. Putin’s adventurism is due to the same factors that made Hitler’s expansionist policies possible. After Hitler had signed the Munich Treaty with Britain and France in 1938, he said of Chamberlain and Daladier: “Our opponents are like little worms.” I am sure that following the 2008 Georgian War, when Western leaders tried to appease the Kremlin instead of taking a stand against military aggression, Putin and Medvedev referred to them in similar terms.

The lack of reaction from the West over Russian aggression against Georgia, not to mention the suppression of political freedom and all opposition within Russia itself, convinced Putin that he could act with complete impunity. This led him to make a mistake that is common to all dictators. They allow themselves to believe they hold the advantage over the old democracies because it is easier for a dictator to brainwash and mobilize the population. This creates the illusion that they can continue to outperform and outmaneuver the West over a long-term period. Ultimately, such misadventures always end the same way. Putin will eventually meet the same fate as Hitler – although we can only pray that this does not involve the same number of casualties. There is hope that it will not reach that point, because Putin may well receive a blow to the temple from a golden snuffbox (reference to the assassination of Tsar Paul I – Ed.) before he manages to press the red button.

Contemporary Russia’s authoritarian model is often justified by claims that the country is unsuited to European-style democracy. What would it mean for Russia if Ukraine manages to succeed in its bid to achieve democratic transition and European integration?

Putin started the current war specifically to prevent this from happening. Ukraine’s successful Euro-integration would mean the total collapse of Putinism. It would serve as an irresistible source of inspiration for the whole of Russian society. The kleptocrats would not be able to contain the momentum it would create. This is the real reason behind Putin’s policy in Ukraine: his main goal is not localized territorial acquisition but rather control over the whole of Ukraine, in order to prevent it from becoming an attractive example of reform for the Russian population.

How is the current conflict changing the way ordinary Russians perceive Ukraine?

Many ordinary Russians who watch State TV on a regular basis are zombified and brainwashed. They genuinely believe today’s Ukraine is occupied by fascists and cannibals. However, I do not think this way of thinking is inherent to the majority of the population. This represents another defeat for the system – this time inside Russia itself. Putin had expected the Russian population to serve as fuel for his ‘sacred’ war. He used the same excuses as Hitler did to start his wars – namely the protection of fellow nationals elsewhere, not only in Ukraine but also in Kazakhstan, the Baltic States, Belarus and beyond. It has not worked out exactly as planned. Despite the most unprecedented state propaganda campaign in history, the Russian people are not eager to fight and die for Putin, to put it mildly.

We should not allow ourselves to be fooled by Putin’s high approval ratings. Dictators like Gaddafi and Ceausescu enjoyed even higher official approval ratings, and we all know what eventually happened to them. Surveys of public opinion in any dictatorship are literally meaningless. There is no doubt that a large part of the Russian population approved of the annexation of Crimea. This approval was thanks to very high-quality media coverage and because the loss of Crimea had been regarded as a source of national trauma ever since the collapse of the Soviet Union. Even so, the next stage of the hybrid war in the Donbas led to casualties that most Russian people regarded as unacceptable despite all the propaganda and brainwashing. This is evident from the fact that military casualties have now become the most classified data in modern Russia. They had to adopt a special law to classify this data as top secret because Russian public opinion does not accept the idea of war casualties, even in the name of an allegedly ‘sacred’ cause.

Herein lies the main difference between the Russians and the Serbs. The majority of the Serbian population was ready to wage war together with Slobodan Milosevic, but Russian society has proved far less willing to go to war than the Serbians. After the collapse of the Soviet Union, most Russians quietly accepted the new borders of the country. In contrast, when the old Yugoslavia began to disintegrate, the Serbs rushed into multiple bloody wars. Milosevic was by no means the only one driving this process. Putin’s great mistake was to try and act like Milosevic, despite the fact 25 years had passed since the fall of the Soviet Empire. To his great disappointment, he has discovered that there was simply not much support for such policies among the Russian population. This was bad news for Putin himself, but it may point to the basis for future reconciliation, which is likely to begin at the grassroots level between ordinary Russians and Ukrainians, rather than at the bilateral state level.

About the author: Fedor Klimenko is Editor of The Russian Monitor (rusmonitor.com)