FROM KREMLIN TO HAGUE: Will Putin ever have to face justice for Ukraine hybrid war? 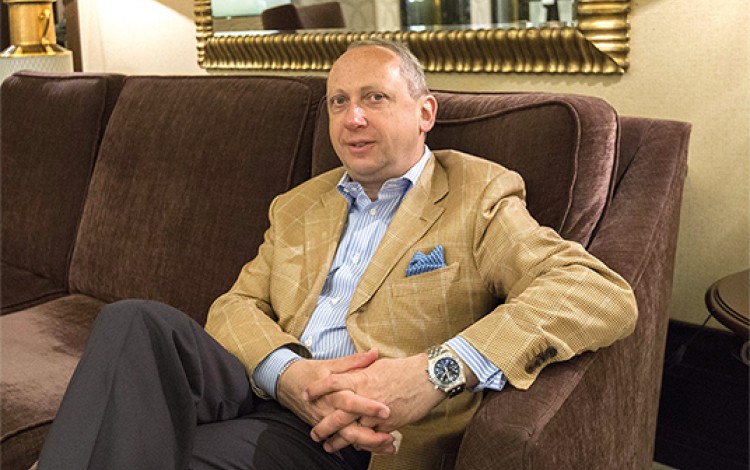 About the interviewee: Slava Rabinovich is the CEO and CIO of Diamond Age Capital Advisors and a well-known Russian political commentator
Fedor Klimenko

A landmark report issued in mid-November by the International Criminal Court in The Hague classified the war in eastern Ukraine and the occupation of Crimea as international conflicts between Russia and Ukraine. The findings are a major blow to the Kremlin, which has long denied any direct military role in Ukraine. Immediately after publication of the report, Russia announced its withdrawal from the ICC, saying the court had, “failed to meet expectations to become a truly independent, authoritative international tribunal.”

Ukraine has vowed to continue pursuing ICC prosecutions over Russian war crimes in Crimea and the Donbas region of eastern Ukraine. However, the Kremlin’s decision to distance itself from the international body makes the prospect of any future war crimes trial highly unlikely. Nevertheless, the ICC report represents one of the most credible confirmations to date of Russian responsibility for the bloodshed in Ukraine. While it may not pave the way for the spectacle of Vladimir Putin on trial in The Hague, the report raises serious questions over Moscow’s role as a mediator in the peace process, and shatters the Kremlin’s hybrid war façade of plausible deniability.

The Hague’s findings are the latest setback for Moscow as it scrambles to defend its increasingly Kafkaesque claims to non-combatant status in the Ukraine conflict. In September, a Netherlands-led international investigation into the July 2014 downing of flight MH17 over eastern Ukraine clearly and unambiguously identified Russia as the guilty party. Meanwhile, in November the United Nations General Assembly voted to recognize the Russian military occupation of Crimea.

Business Ukraine magazine spoke to prominent Russian political commentator and outspoken Kremlin critic Slava Rabinovich about the possible implications of the ICC report. What will it mean for the conflict in eastern Ukraine, and what impact could it have on Kremlin hopes of securing a thaw in relations with the incoming Trump White House?

The International Criminal Court (ICC) recently concluded that the annexation of Crimea constituted an international armed conflict between Russia and Ukraine. However, Moscow does not recognize the authority of the ICC. Does this render the ICC findings purely symbolic, or could the report have any legal implications for Russia?

To understand Russia's position in relation to international law, we must first recognize the nature of the current Russian government. A criminal clan has seized power in Russia and has turned the entire country into a personal fiefdom where they are able to control all natural and human resources like medieval lords. At the same time, they also control one on the largest nuclear stockpiles on the face of the planet. This is a completely unprecedented situation in world history that threatens to undermine the foundations of international security. As a result, nobody really knows how things will develop going forward. Nevertheless, it is important to remember that neither Slobodan Milosevic, nor Saddam Hussein, nor Nicolae Ceaușescu could ever have possibly imagined they would go on to face their own trial. So we cannot completely rule out the possibility of seeing Putin himself on trial. Personally, I think there is a good chance Putin will eventually have to face justice for all the crimes he has committed in Russia and abroad, but it is unlikely to happen in the near future.

I do not believe the Kremlin will ever consider reversing its current policy of denials. Nor will Moscow try to openly justify its military intervention in Ukraine. On the other hand, Russia will not dare to launch a full-scale military offensive, either. The Kremlin regards the conflict in the Donbas as a war against the West as a whole. For them, it is merely being fought on Ukrainian soil. They understand perfectly well that this war can no longer be won. In fact, in a very literal sense, they appreciate that the war has already been lost. Nevertheless, they will not surrender under any circumstances. Instead, we can expect a continuation of the current hybrid efforts to create as many problems for Ukraine and the West as possible. One of the key objectives is to secure as advantageous a position as possible for future negotiations. They are already pondering how to retreat from Ukraine, but they will never publicly admit their involvement in the war because this would significantly increase the likelihood of international prosecution.

Regardless of the realities on the ground, Russian diplomacy has traditionally advocated the need to uphold international law. To what extent has the war in Ukraine forced the Kremlin to change this stance?

It is completely transparent to anybody who is not under the direct influence of Russian state propaganda that the Kremlin’s mantras about the sanctity of international law have exactly the same value as Hitler’s earlier pronouncements. The Kremlin knows this but continues to behave as if everyone it interacts with is a complete idiot. I personally think the real idiots in this case are the people sitting in the Kremlin who are behaving in this manner. All those bold statements about Russia upholding international law are nothing but an attempt to deny the obvious. I find it comical when representatives of the self-styled Russian liberal media from outlets like ‘Echo of Moscow’ try to depict Putin as a stickler for legality. These commentators do not appear to understand how ridiculous the Kremlin looks whenever Russian officials try to portray themselves as advocates of international law.

How has Russian public opinion responded to the ICC report? Does the Russian public genuinely believe Kremlin denials of a Russian military role in Ukraine, or do they merely regard these denials as a necessary deception?

This question is very easy to answer, because 99% of Russian TV viewers do not have the slightest idea about the ICC report. They cannot have an opinion about something they know nothing about. Those few people who do know about this report represent such a small percentage of the population that they fall within the statistical margin of error for any opinion poll. In reality, in today’s Russia there is no such thing as public opinion in the Western sense – just state propaganda.

Will the ICC report make it more difficult for the incoming Trump administration and pro-Putin forces within the EU to push for a thaw in relations with Russia?

I think a thaw in bilateral relations between the US and Russia is theoretically possible if Russia changes its own behavior. However, there is very little chance of this happening. The ICC report identifying Russia as the aggressor in Ukraine will not have any major impact on the situation one way or another, because the framework for bilateral cooperation between Trump and Putin is already clear. This framework will remain relatively narrow regardless of whether Trump seeks to pursue his personal vision for a new relationship with Russia. Even as US President, Donald Trump will find that he is constrained by a sophisticated system of checks and balances. A quick look at the candidates to serve in the Trump administration also makes me doubt that there will be much in the way of common ground for friendship between Vladimir and Donald. Russian policymakers regard most of the people under consideration for the Trump White House as hawks or even outright Russophobes.

Trump as president is also likely to be a very different proposition to Trump on the campaign trail. Once he takes office as US President, Trump will have a range of tools at his disposal to influence Russian policy. Taking into consideration his psychological profile and personality type, I think it is reasonable to expect him to take full advantage of this. Coming back to your question, the ICC report has not transformed the situation but it does serve to make others even more wary of engaging with Russia. There has been a strengthening of the international position towards Russia in recent weeks, leading to a number of statements, resolutions and decisions targeting Putin’s regime. As well as the ICC report, the United Nations General Assembly voted to recognize the Russian occupation of Crimea. New names have appeared on the sanctions lists. All these measures are part of efforts by the outgoing Obama administration to hem President Trump in and reduce his wriggle room in dealing with Russia. This makes the idea of a genuine thaw in US-Russian relations about as likely as an international war crimes trial with Putin as defendant.

About the author: Fedor Klimenko is Editor of The Russian Monitor (rusmonitor.com)