UKRAINE ON THE GEOPOLITICAL FRONTLINE

DECISIVE BATTLEFIELD: Why the Hybrid Cold War with Russia will be won and lost in Ukraine 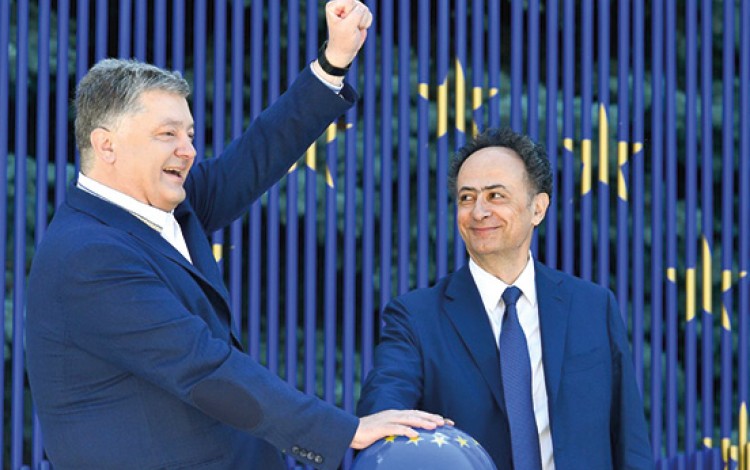 When did the Cold War actually end? Was it the night the Berlin Wall fell? Perhaps the final act was the failed KGB coup in Moscow? Possible alternative dates include the Ukrainian declaration of independence, the withdrawal of Soviet troops from Eastern Europe, or Gorbachev’s resignation on 25 December 1991. In reality, history is not nearly as neat and tidy as textbook chronologies might lead us to believe. The passing of epochs is generally a convoluted and imprecise affair that often only becomes apparent long after the fact.

We now find ourselves caught up in a new period of transition as the post-Soviet world that emerged from the wreckage of the Communist collapse makes way for a new and far more confusing geopolitical landscape. While the fall of the Soviet Union once led some to declare “the end of history”, recent events have shown just how premature that particular obituary was. History is clearly back with a vengeance. The relative certainties of the past quarter-century characterized by American dominance, European stability, and the march of democracy have given way to the ideological and informational ambiguities of the post-truth era.

As per the Cold War, the precise end of post-Soviet era is difficult to pinpoint with any accuracy. The Russian invasion of Crimea in early 2014 is probably the single most decisive event, while Brexit and the election of Donald Trump are also obvious candidates. More recently, Ukraine’s President Poroshenko caught the mood when he hailed the advent of Ukrainian visa-free travel to the EU as an historic landmark signaling his country’s final divorce from the Soviet past and reunion with the European family of nations. This last event may not have made global headlines, but it captured the essence of the emerging struggle between the values of international cooperation and the realpolitik of national interests encapsulated in Trump’s “America First” rhetoric and Putin’s “Russian World” militarism.

As this new era takes shape, Ukraine now finds itself closer to the epicenter of world affairs than at any time in the country’s history. It is no exaggeration to state that the fate of Ukraine will have enormous implications for the future of international relations as a whole. If Ukraine’s ambitious transformation towards European-style open democracy is successful, it will breathe new life into the idea of unifying European values and greatly strengthen the global appeal of the democratic model.

Ukraine’s failure would have the opposite effect. Russia would be emboldened to expand its hybrid war further into EU territory, while isolationists and nationalists all over the world the world would proclaim the moral bankruptcy of globalism and lay the blame for the fiasco squarely on the shoulders of international institutions ranging from NATO to the IMF.

Ukraine is not merely the ideological frontline in this new global confrontation - it is also the physical frontline. Since 2014, it has been the primary testing ground for the hybrid forms of Russian warfare that the wider world is only now starting to come to grips with. Ukraine was the first country subjected to the Kremlin’s entire arsenal of information weaponry, including everything from leaked phone conversations and fake news to hack attacks and industrial-scale trolling.

Moscow has honed the abilities of its cyber warriors in Ukraine, with many seeing the massive late June cyber attack on the country as a new escalation in this novel form of international aggression. It is surely only a matter of time before other nations face attacks similar in scale to those currently focusing on Ukraine. This would be entirely consistent with the hybrid war developments of recent years. Indeed, for virtually every international crime the Kremlin currently stands accused of, it is possible to find a direct Ukrainian precedent.

All this makes Ukraine arguably the key battleground in the multipolar era we are now entering. This newfound importance should provoke a long overdue international reappraisal of Ukrainian issues. It is time to start looking at this vast and historically complex country beyond the narrow confines of the previously dominant post-Soviet context.

Throughout the post-Soviet era, news from Ukraine tended to reach international audiences via the distorting prism of Russian narratives. This framing was generally done by international correspondents based in Moscow, where they inevitably absorbed many of the imperial prejudices that dominate Russian thinking towards Ukraine. With the two countries now engaged in an undeclared war driven by Ukraine’s desire to escape Moscow’s orbit and integrate into the Euro-Atlantic community, it no longer makes sense to interpret Ukrainian affairs in this Russo-centric light.

The changing tides of history mean that the Western world can no longer afford to ignore Ukraine as it did for much of the past 25 years. Like West Berlin during the Cold War, today’s Ukraine has become a potent symbol of a broader geopolitical struggle. It has acquired an importance far beyond its intrinsic strategic value and will inevitably remain high on the international agenda for many years to come. In this context, continued Western support for Ukraine is not a matter of moral obligations or foreign policy adventurism – it is pure political self-interest.