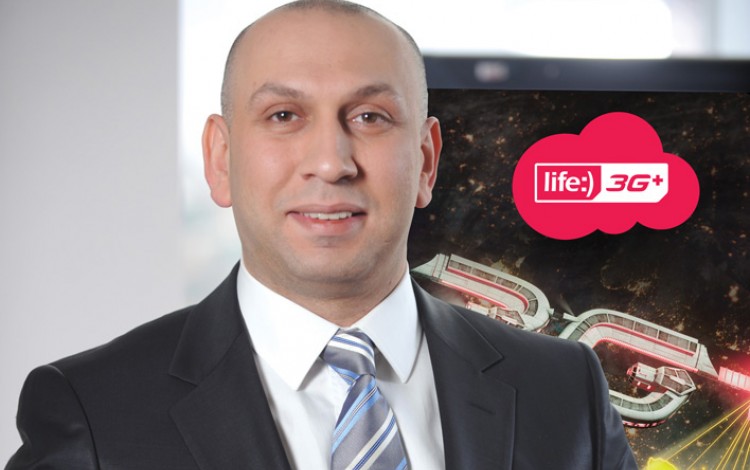 Erdal Yayla has served as acting CEO at mobile operator life:) since February 2014, ten years after first joining the company following a career which had earlier seen him in executive roles at PwC and Turkcell. Marmara University graduate in Business Administration Mr. Yayla now finds himself at the helm of one of Ukraine’s major mobile operators as the launch of 3G technology in the country revolutionizes the Ukrainian communications sector. He spoke to Business Ukraine magazine about the opportunities created by the arrival of 3G, and shared his perspective on the likely impact this breakthrough will have on everything from the way Ukrainians do business, to significant lifestyle changes due to access to high-speed internet everywhere and all the time.

What does the introduction of 3G licenses mean for the Ukrainian telecoms market?

Ukraine’s mobile communications sector is crucial to the development of the broader economy. A look at recent global statistics illustrates that the world is becoming more and more mobile on a daily basis. Mobile broadband subscriptions grew globally by around 30% in 2014 year on year, while mobile data traffic rose more than 50% in Q1 2015 compared to 2014 (this trend closely mirrors the experience of life:) which saw data traffic growth in 2014 of 51%). In general, people are increasingly using smartphones as part of their everyday lives, and are increasingly communicating with their smartphones via social media. The introduction of 3G technology has been shown to boost economic growth in countries where it is launched. As well as supporting the growth of the wider economy, the introduction of 3G in Ukraine will also create thousands of new jobs.

Ukrainian consumers have been waiting for 3G technology for some time. Our aim to provide it as soon as possible and to as many consumers as possible. We were the first mobile operator on the Ukrainian market to introduce 3G technology in the country, launching 3G in Lviv on 19 May, and in Kyiv on 4 June. In the meanwhile, we have included 30 cities in our test program and plan to provide commercial usage in cities where 3G is currently working in test mode.

We have reason to be optimistic about the 3G services life:) is introducing: we have the youngest network, which means less preparation work is required, and we have secured the most attractive frequencies. Moreover, our network has the highest level of smartphone penetration (36%), while penetration of 3G-compatable devices is even higher at 40%, which is more than in some countries with developed 3G services. We are also witnessing a strong growth trend in Ukrainian mobile data traffic consumption, which is evidence that Ukrainian subscribers are ready for 3G services.

The launch of 3G technology in Ukraine will enable operators to provide a wide variety of services and to expand the range of tariff plans on offer. In order to facilitate the healthy development of the telecommunications market, subscribers should also have the opportunity to choose freely between operators. This implies the elimination of existing market barriers and non-competitive practices, including things like the ‘club effect’ caused by the practice of dumping on-net calls and overcharging for off-net calls. The issue of unequal radio frequency spectrum distribution among operators also needs addressing.

What are the next technical priorities for the Ukrainian telecoms market?

It is probably still too early to comment on the next steps in Ukraine’s technological progress. Today, the focus needs to remain on full 3G implementation. Additional technological progress will depend on a number of factors. 4G requires handsets that will support it, which are presently not widely in use in Ukraine, so there are question marks over how soon the leap to 4G could come. Then there is the issue of the limited number of frequencies and the question of their fair and equal re-allocation in order to provide as many subscribers as possible with access to innovative new technologies. Nevertheless, we are sure Ukraine is now moving in the right direction technologically and will continue along this path at a faster and faster pace.

Which segments of the Ukrainian telecoms market offer the most exciting growth opportunities?

The launch of 3G opens up a range of new areas for growth, including mobile finance, e-commerce, e-governance, mobile health and much more. E-commerce could benefit considerably from the greater technological opportunities of 3G. According to research company “TNS Ukraine”, the number of e-shoppers in Ukraine is growing despite the challenging current economic environment in the country. In September 2014, 3.5 million Ukrainians made internet purchases, while in April 2015, the figure had risen to over 3.9 million. The launch of 3G and expansion of internet sales services will only add to this robust growth trend.

More Ukrainians are online than ever before – 62% of Ukrainians had internet access in April 2015, compared to 59% one year earlier. According to research conducted by the Google Consumer Barometer in 2014, only 5% of internet users in Ukraine did their shopping via smartphones, while a further 2% used their tablets for purchases. An additional 30% of users researched products via their mobile devices. As a mobile operator, we believe that this area represents huge potential for growth once 3G launches across the whole country. Experience elsewhere demonstrates that the percentage of ‘mobile shoppers’ is highest in countries with functioning 3G and 4G networks. This illustrates the fact that there is a direct correlation between e-services and new technologies.

How has the growing domination of smart phones with mobile internet access impacted on life:)’s business model?

We have designed specific smartphone strategies to reflect the fact that our network tends to attract modern and technologically advanced mobile users. The goal of these strategies is to make the life of smartphone users as comfortable as possible. We have designed special tariffs taking into consideration the interests and requirements of these users, w hile providing them with a range of mobile internet options. This approach has already produced results. In 2014, we saw data traffic growth among users of 50.8%. The penetration of 3G-ready smartphones in our network has reached 40%, which means four million subscribers. We anticipate that they will become 3G subscribers as soon as our network launches in their cities.

With each passing year it is getting harder and harder to pigeonhole modern mobile devices into traditional categories like telecommunications, computer hardware, and consumer electronics. This is because the mobile subscribers can use their phones to do everything from taking pictures and resolving working issues via emails, to surfing the internet, downloading and watching videos, and transmitting their geographic location.

The increasingly high functionality of modern mobile devices brings with it a number of demands and opportunities for operators. The most important of these is to create synergy between different services such as voice, data, and SMS services, as well as managing convergence with other industries to make sure phones enjoy maximum functionality. For example, this can mean convergence in terms of GSM and finance services, GSM and smart-home services, e-commerce and e-governance.

Mobile medicine opportunities also have a wide scope for technological applications. Our shareholder, Turkcell, has made huge progress in this sphere, having introduced mobile devices in Turkey capable of measuring blood pressure and sugar levels at a distance. This provides patients with the opportunity to be monitored by doctors, regardless of their current location. They could be spending at their mountain holiday home, or situated in a faraway suburban area, but they can still receive the same level of medical services as urban residents located in cities with the best clinics. This is a good example of how GSM and medicine can work together in order to bring benefits to society as a whole.

What can Ukraine learn from the experience of rapidly expending telecoms markets like Turkey?

There are a number of lessons from the Turkish experience that are worth studying and learning from. The first area relates to technological growth, while Turkey’s experience with market regulation also offers potentially useful insights. In terms of new technologies, we would like to use the experience of Turkey and Turkcell as we look to introduce a number of services to the Ukrainian market such as mobile finance and mobile medicine. Both have the potential to significantly improve the quality of life in Ukraine.

Turkey has also been involved in the implementation of a telecoms regulatory process that has succeeded in creating a level playing field for players. The result has been improved competition, consumer benefits and greater investment. Price control mechanisms have been introduced to prevent non-competitive practices among dominant operators, while retail price measures have sought to reduce the network (club) effect. Also, Turkey introduced consumer-friendly mobile number portability to the market and to create a framework for fair and competitive spectrum management. All these instruments of regulation are required on the Ukrainian market, and can help make competition fairer and more predictable for all market players.