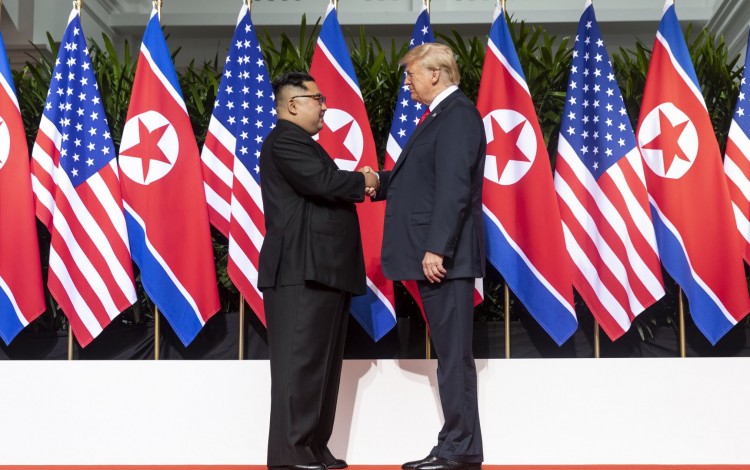 US President Donald Trump and North Korean leader Kim Jong-un meet in Singapore in June for a summit that attracted global headlines but appears to have produced no meaningful progress towards the denuclearization of the Korean peninsula
Peter Dickinson, Business Ukraine magazine

US President Donald Trump achieved his wish for a headline-grabbing summit with North Korea’s Kim Jong-un in June, but it looks increasingly like the meeting was a failure. Rather than producing an historic denuclearization breakthrough, the summit resulted in vague disarmament commitments that already appear to be unravelling. This is perhaps not surprising. Indeed, when viewed from the perspective of denuclearized and dismembered Ukraine, North Korea’s reluctance to surrender its nuclear weapons is particularly easy to understand.

Ukraine emerged from the wreckage of the Soviet collapse in possession of the world’s third largest nuclear arsenal, but it did not hold onto it for long. Under the terms of the 1994 Budapest Memorandum cosigned by America, Russia and Great Britain, Ukraine agreed to pass its arsenal over to Moscow. In return, Kyiv received security assurances. These security assurances proved worthless in 2014 when Russian troops seized Ukraine’s Crimean peninsula and invaded the east of the country. As the entire Western world stood by, Ukraine was left to reflect bitterly on the folly of its nuclear disarmament. Meanwhile, ambitious and insecure nations from North Africa to the Far East looked on and drew the only logical conclusion: if you have nukes, keep them. If you do not have nukes, get them.

Why is Russia’s Ukraine invasion so much more significant than seemingly similar challenges to the post-Cold War international order such as the 1999 Kosovo campaign, the US-led 2003 Iraq War, and NATO’s 2011 Libya intervention? Whataboutery is an unavoidable element of any attempt to analyze Russian foreign policy, but in the context of denuclearization, there really is no comparison. While Kosovo, Iraq and Libya all served to undermine the credibility of a rules-based international security system, they failed to discredit nuclear disarmament in the same specific manner as Putin’s attack on Ukraine. Of the three, Libya offers the closest parallels, but Colonel Gaddafi had not yet joined the nuclear club when he agreed to end his atomic program. In contrast, when Ukraine disarmed in the 1990s, it was giving up an arsenal larger than those possessed by Britain, France and China combined.

Ukraine’s plight resonates precisely because the country’s decision to relinquish its nuclear weapons voluntarily was such a landmark event in the quest for a nuclear-free world. It was nothing less than the biggest single act of nuclear disarmament in history. This should have made Ukraine the inviolable poster boy of nonproliferation and a sacred cow of the twenty-first century’s international security architecture. Instead, the country suffered invasion at the hands of one of the three signatory nations to broker Ukraine’s historic gesture. Here was the ultimate proof that treaties and memoranda are no match for muscle.

In the aftermath of its Crimean land grab, Russia attempted to justify its conduct by arguing that the Ukraine of spring 2014 had undergone a revolution and was therefore no longer the same country as the nation whose sovereignty it had pledged to honor in 1994. Meanwhile, the United States and Great Britain pointed out that they had offered security assurances rather than guarantees. This was factually correct, but many Ukrainians felt that such an interpretation was hardly in line with the spirit of the 1990s disarmament deal. Unsurprisingly, this Budapest betrayal has succeeded in destroying the credibility of security assurances, regardless of who offers them. Nobody wants to find themselves scouring through the small print of complex international agreements as enemy tanks roll across the border.

The failure of the Budapest Memorandum has created a global security environment where military strength is once again the ultimate arbiter of international affairs. This is clearly not a climate conducive to disarmament. On the contrary, the world may currently be entering a precarious new era of nuclear proliferation that future historians will date from the moment in late February 2014 when Russia’s Ukraine invasion first began.

President Trump had hoped to make the kind of denuclearization deal with North Korea that would secure his place in history. That now looks like a distant dream. Instead, we are far more likely to witness other countries striving to share Pyongyang’s nuclear status. When it comes to nuclear disarmament, the decisive deal actually took place back in 1994, and it turned out to be one of the most disastrous deals in history. Ukrainians are already paying a terrible price for this debacle, but they are unlikely to remain alone for long. In time, it will become painfully apparent to the rest of us that the costs of Putin’s Ukraine invasion are global.