OPINION: Russian retreat from Ukraine is a tale of unforced Kremlin errors and self-defeating imperial hubris 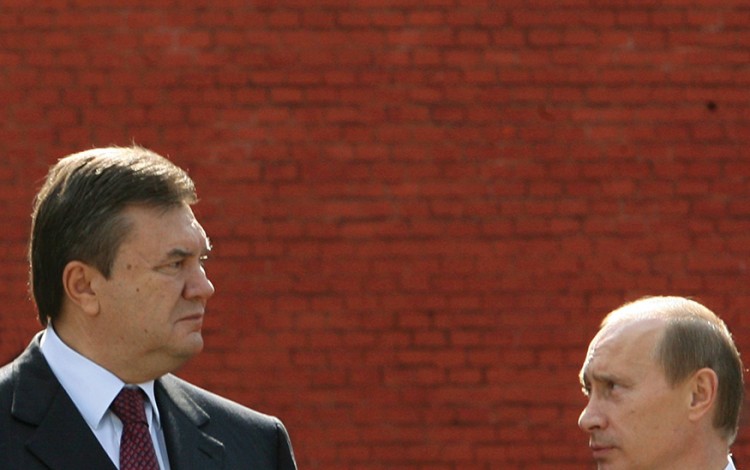 Vladimir Putin’s unwelcome and overbearing support for Viktor Yanukovych prior to the 2004 Ukrainian presidential election served as a catalyst for the Orange Revolution. Many Ukrainians viewed Putin’s intervention as typical of Russian chauvinism
Peter Dickinson

As the undeclared war between Russia and Ukraine enters its fifth year, it is becoming increasingly difficult to remember a time when the two countries were not at each other’s throats. The toxic contemporary climate has succeeded in poisoning our perceptions of the past, replacing all the old odes to Slavonic fraternity with a new narrative depicting Russians and Ukrainians as eternal enemies.

This retrospective wisdom makes it tempting to regard the collapse of the Russian-Ukrainian relationship as somehow inevitable. In reality, there was nothing preordained about it. Indeed, it is difficult to think of any two other nations with quite so much in common. Ukraine and Russia have been central actors in each other’s histories for centuries and could conceivably have forged a new partnership in the post-Soviet era. That they failed to do so is largely down to modern Russia’s embrace of revanchist imperialism and Moscow’s refusal to recognize the new realities created since 1991 by Ukraine's growing sense of statehood.

Following the breakup of the USSR, Ukraine was one the very few countries where Russia possessed the requisite soft power tools to maintain its influence without having to rely on military force. Ukrainian society emerged from the Soviet era harboring numerous historical grudges against Russia, but the formidable ethnic, religious, social and linguistic ties connecting the two countries at the grassroots level meant that no other Soviet republic felt closer or more intimately familiar to Russians than Ukraine. The feeling was largely mutual. At a time when them-and-us suspicions still dominated post-Soviet interaction with the outside world, the differences between Russia and Ukraine seemed petty by comparison. For many millions of people on both sides of the border, the two newly separated countries remained very much part of the same civilizational whole.

Throughout the 1990s, Ukrainians and Russians continued to have a great deal in common. They watched the same TV soap operas, listened to the same pop music, read the same literature, and laughed at the same jokes - with much of the humor centered on the rampant corruption and dysfunctional democracy common to both societies. Politically, culturally, socially and economically, all roads still led to Moscow. Ukraine had gained independence but had not yet found an identity of its own. By the early 2000s, Ukraine’s second president Leonid Kuchma felt sufficiently frustrated by this state of affairs to write a book entitled: “Ukraine is not Russia”.

What happened to transform this “Russia-lite” version of Ukraine into the strikingly patriotic nation of today? The emergence of Ukraine’s first post-independence generation has played a crucial role in this process merely by growing up with a non-Soviet sense of self. As greater numbers of Ukrainians with no memory of the shared Soviet experience have begun to contribute to the national dialogue, the formerly blurred boundaries between Russia and Ukraine have inevitably gained new clarity and definition. Nevertheless, this generational shift would have been far slower and less pronounced were it not for Russia’s antagonistic approach to all things Ukrainian.

Since the dawn of the Putin era in 2000, the Kremlin has consistently pursued policies towards Ukraine that have appeared tailor-made to offend and unite Ukrainian society in equal measure. Where skillful exploitation of common ground might have paid considerable dividends and served the Kremlin’s foreign policy interests admirably, Russia has tended to favor a brand of high-handed diplomacy that many Ukrainians interpret as thinly veiled imperial condescension.

Putin’s decision to visit Ukraine on the eve of the country’s 2004 presidential election and lecture Ukrainians on how to vote was a case in point. Broadcast simultaneously on multiple national TV channels, this characteristically chauvinistic display backfired disastrously. It infuriated even the most disinterested of Ukrainians and helped mobilize previously apathetic sections of the Ukrainian public in opposition to the preferred government candidate Vitkor Yanukovych. Many analysts regard Putin’s ill-judged intervention as a key cause of the Orange Revolution, which erupted within weeks of his Kyiv appearance.

Nine years later, as Ukrainian society mulled whether to sign an Association Agreement with the European Union or join the Moscow-led Eurasian Union, Russia contributed to the debate by unilaterally launching a trade war. There was no attempt to conduct a charm offensive and win Ukrainians over to Moscow's side. Nor was there any effort to tap into the strong feelings of kinship for Russia present throughout much of Ukrainian society. On the contrary, the Kremlin preemptively punished Ukrainian exporters and threatened further grave consequences, while adding insult to injury by assuring Ukrainians that Europe did not really want them anyway.

The ultimate example of Russia’s tone-deaf approach to Ukraine came in spring 2014, when Kremlin efforts to partition the country via hybrid military intervention left Moscow’s influence on Ukrainian affairs at historic lows and Putin's dreams of a new Eurasian empire in tatters. This blunder was to prove the final nail in the coffin of Russia’s Ukraine policy, but it was very much in line with all that had gone before. The decision to engineer pro-Russian uprisings inside Ukraine in early 2014 reflected Moscow's long-held but deluded belief that Russian-speaking Ukrainians would flock to the Kremlin banner when the time was right. It was the culmination of Russia's refusal since 1991 to recognize the nation-building dynamics at work in independent Ukraine.

Remarkably, Russia remains apparently incapable of learning from these failures. In early March 2018, the Kremlin once more succeeded in briefly uniting Ukrainian society against it. On this latest occasion, Moscow abruptly cut gas supplies to the country at a time when temperatures were averaging minus fifteen degrees. Ordinary Ukrainians responded to the emergency by rallying round and dramatically reducing their energy consumption. This allowed the population to survive unscathed, but many will remember how close Russia’s actions brought them to potential humanitarian catastrophe. Yet again, Moscow demonstrated its unrivaled ability to mobilize the Ukrainian population while simultaneously shooting itself in the foot.

It is hard to avoid the conclusion that for reasons rooted in its own sense of national identity, modern Russia simply cannot accept the idea of an independent Ukraine. This would go some way towards explaining Moscow’s otherwise irrational refusal to treat Ukraine as a fully sovereign nation, despite the obviously detrimental effect such posturing has had on Russian influence. It would also help make sense of Russia’s apparent need to belittle Ukrainian statehood aspirations while depicting Ukrainian patriotism as an extremist menace.

These prejudices have worked directly against the emergence of a new and mutually beneficial post-Soviet partnership between Russia and Ukraine. Indeed, they have probably made any such understanding impossible. Rather than trying to accommodate independent Ukraine’s nation-building aspirations and create a contemporary context that could allow both countries to build on their common past, the Putin regime has insisted on treating Ukraine as a wayward child.

Publicly at least, the Kremlin remains firmly in denial over the loss of Russian influence in Ukraine. Since 2014, there has been virtually no recognition of Russian policy failures towards Ukraine or debate over the missed opportunities of the past few decades. Instead, Putin prefers to repeat his belief that Ukrainians and Russians are “one people”, while at the same time accusing everyone from NATO to the EU of driving an artificial wedge between the two countries. This conveniently absolves Moscow of responsibility for the collapse of Russia’s position in the country’s geopolitical heartlands. In private, however, Putin must know that he has only himself to blame.

About the author: Peter Dickinson is the publisher of Business Ukraine magazine and a nonresident fellow at the Atlantic Council.