OPINION: Crimean seizure was geopolitical equivalent of a plastic bag over the head 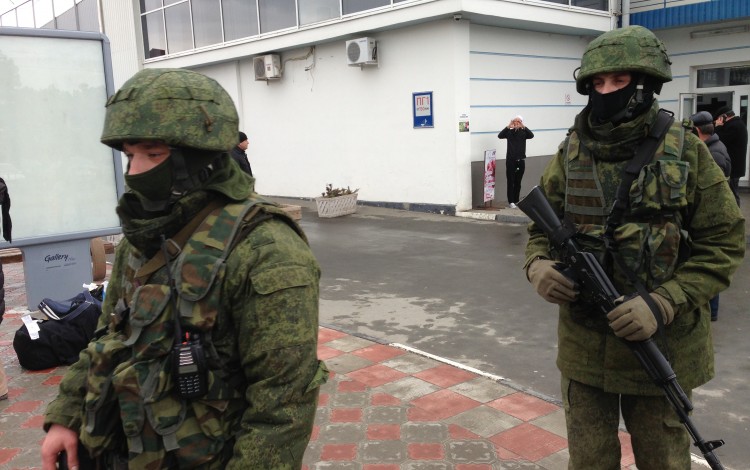 Invaders Without Insignias: Russian soldiers removed all identification markings before seizing control of Ukraine's Crimean peninsula in February-March 2014 sparking the biggest international security crisis since the end of the Cold War
Olexander Scherba

Time after time, the issue of Crimea has appeared during the course of the election campaign in Austria. In light of regular calls by some Austrian politicians to accept the Russian occupation of Crimea, it is time to remind them of some basic facts.

First, Crimea is just as Russian under Putin as Austria was German under Hitler. The annexation was an obvious and clear breach of fundamental international law. Primarily, this means it was in direct violation of all bilateral treaties between Ukraine and Russia, beginning with the 1994 Budapest Memorandum, under which Russia (in exchange for Ukraine surrendering what was at the time one of the world’s latest arsenals of nuclear weapons) vowed to respect the inviolability of Ukrainian borders.

Second, no one stood in anyone’s way in Ukrainian Crimea; no one’s rights were violated. The annexation was an unprovoked land grab in the worst traditions of the twentieth century’s darkest chapters. Caused solely by the Kremlin’s imperial greed.

Third, there is no way to make an illegal Anschluss legal. The euphoric faces of some locals prove nothing. Due to its own historic experience, Europe, in particular Austria knows this better than anyone. The so-called “referendum” in Crimea was a travesty, observed solely by those who need observation themselves.

Fourth, the notion that “Crimea was always Russian” does not hold water. Crimea was part of the Russian Empire and then part of the Russian Soviet Federal Republic in 1784-1954, but it was under Crimean Tatar and Ottoman Empire rule for considerably longer. As historic reference, Kyiv was a part of the Russian and Soviet empires from 1654 until 1991. By this logic, is the Kremlin entitled to proclaim Kyiv as “eternally Russian” and occupy it too? Can any European politician afford such logic?

Fifth, the 2014 Anschluss was not bloodless as many apologists claim. The most striking example is the fate of 39-year-old Reshat Ametov, who was tortured and shot in the eye just for holding a piece of paper that said: “No to the occupation!” This happened on 3 March 2014, at the outset of the annexation. An ocean of hate had not yet come to separate Ukraine and Russia. Ukrainians were watching the occupation unfold in a kind of collective paralysis, unable to imagine that a “Ukrainian-Russian War” was even possible. The Kremlin obviously did not have any such qualms. It came, it killed, and it took away our land.

Dozens of ethnic Ukrainians and Crimean Tatars have vanished during the occupation. Political prisoners like Oleg Sentsov, Oleksandr Kolchenko and Hennady Afanasyev have been tortured with electric cables and plastic bags. Just recently, the occupiers imprisoned and sentenced some of the elder statesmen of the Crimean Tatar community, the politicians Akhtem Chiygoz and Ilmi Umerov. I cannot help but wonder: do Putin’s friends in Europe have any idea what an electric cable feels like when applied to human skin? Do they know what it is like to have a plastic bag jammed over their head?

This is how Russia came to Crimea – like a plastic bag thrust over the head. Russia came via broken treaties and behind the barrel of a gun. The seizure led to unthinkable suffering for some – and yes, it provoked happy, almost sadistic tears in some others. Does this not bring to mind the European evil of 1938? It is hard not to think back to those dark days when we are confronted by the realities of Putin’s Crimean crime, and when we witness the apparent eagerness of so many European politicians to turn a blind eye.

About the author: Olexander Scherba is the Ambassador of Ukraine to Austria