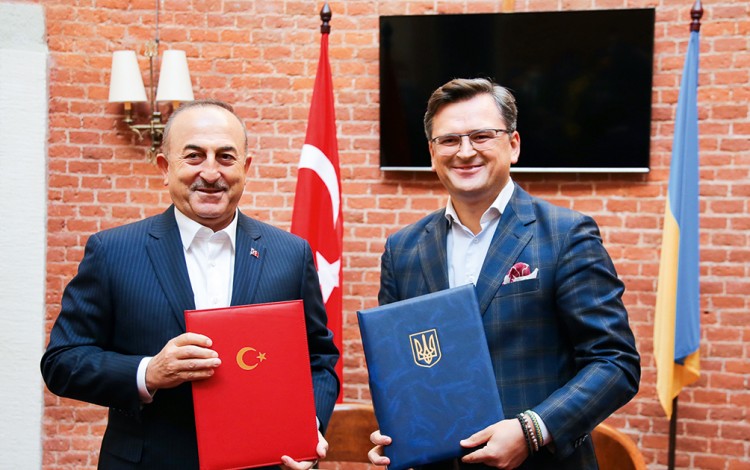 As NATO mulls over its strategy in the Black Sea region and seeks to ensure stability and security in what is an increasingly turbulent environment, Ukraine and Turkey are providing a model worth emulating by actively strengthening their strategic partnership via deepening political, military, and technical cooperation.

This partnership includes an intensive and fruitful political dialog between Turkish and Ukrainian leaders strengthened by the 2+2 Quadriga format of political and security consultations involving the two countries’ ministers of foreign affairs and defense. Priority cooperation initiatives currently include large infrastructure projects and the joint production of Turkish Bayraktar drones, while plans are also evolving to unite efforts in the production of Ukrainian Antonov aircraft.

Both Ukraine and Turkey have strong militaries. Turkey ranks as NATO’s second largest army, while Ukraine is one of the alliance’s key allies in the region with a record of successfully countering Russian hybrid aggression for over seven years. The Turkish and Ukrainian militaries both have a wide range of active units with vast combat experience. Unlike any current NATO member state, Ukraine also has unique experience of direct combat engagement with modern Russian forces.

Ukraine and Turkey are on the same page regarding the Russian occupation of Crimea, with both nations committed to policies of non-recognition. Ankara is one of Kyiv’s most important partners in the recently initiated Crimea Platform, a new international format launched in August 2021 that aims to counter the security, economic, environmental, cultural, and human rights threats emanating from the Russian occupation of the Ukrainian peninsula, and to ultimately bring this occupation to an end.

It is clear that the Russian militarization of occupied Crimea has significantly undermined the security situation in the wider Black Sea region. This is not only a Ukrainian problem. On the contrary, it creates major security challenges with regional and global implications.

According to current estimates, Russia has increased its military presence in Crimea threefold since 2014. Moscow has flooded the occupied peninsula with military hardware, including highly sophisticated weapons systems that pose a threat to countries throughout the Black Sea region and deep into Central Europe. The Kremlin also uses Crimea as a bridgehead for its expanding military activities in the Middle East and Africa.

Russia exploits the occupation of Crimea to interfere with international maritime trade while threatening cornerstones of maritime law including freedom of navigation. Ukraine is currently working on holding Russia accountable in the international courts for violating these principles.

Meanwhile, there is credible evidence that Russia is also engaged in violating the nuclear-free status of Crimea by refurbishing the long-concealed Soviet-era nuclear facilities of Feodosia-13 and deploying nuclear carriers to the peninsula. If confirmed, this would make the ongoing militarization of Crimea a truly global threat.

Taking all these security factors into account, the Ukrainian authorities believe there is a strong argument to be made for enhanced maritime cooperation between NATO and Ukraine in the Black Sea. These concerns also help to explain why Turkey is willing to strengthen its naval posture in the region and is currently engaged in the process of enhancing security cooperation with Ukraine.

Ukraine and Turkey have a long and rich history of bilateral relations that stretches back for many centuries. During the Cossack epoch, Ukrainians often entered into military and diplomatic alliances with the Ottoman Empire, while also frequently finding themselves on opposing sides.

Recent years have seen the strategic partnership between Ukraine and Turkey reach the highest level in the three decades since Ukraine restored its independence in 1991. These strengthening ties owe much to the excellent personal relations between presidents Volodymyr Zelenskyy and Recep Tayyip Erdogan.

Another important cornerstone of today’s deepening partnership is the presence of strong Crimean Tatar communities in both Ukraine and Turkey. We commend President Erdogan for his personal involvement in freeing a number of Ukrainian political prisoners, Crimean Tatars, from Russian captivity.

Ukraine and Turkey are truly friends in need. When Turkey fought devastating wildfires in summer 2021, Ukraine immediately decided to offer help. Kyiv dispatched two large firefighting Antonov aircraft and a number of specialized helicopters to Turkey. Ukrainian firefighters worked night and day to extinguish fires and keep them away from tourist areas.

Our Turkish friends were very impressed with the capabilities of Ukraine’s firefighting Antonov planes. During the most recent meeting with my Turkish counterpart Mevlut Cavusoglu in Lviv in October 2021, he expressed Turkey’s interest in Antonov aircraft. Ukraine welcomes this interest and is ready to explore the possibilities for joint Antonov plane production and international export.

With the climate crisis escalating, the threat of wildfires in Turkey and dozens of other countries around the globe looks like it is here to stay, along with increased demand for firefighting aviation. This makes the proposed aviation industry cooperation between Turkey and Ukraine strategically appealing. We plan to discuss this topic in more depth during our next Quadriga meeting of foreign and defense ministers, which will take place in December 2021 in Ankara.

Next year, Ukraine and Turkey will celebrate 30 years since the establishment of diplomatic relations between the two countries. To mark this occasion, we plan to hold the next session of the Strategic Council between Ukraine and Turkey under the co-chairmanship of both presidents.

A number of agreements and documents are currently being prepared ahead of next year’s Strategic Council. Both sides see the February 2022 meeting as an opportunity to finally sign the long-awaited Turkish-Ukrainian free trade agreement following years of negotiations.

Once in force, this free trade deal will significantly boost already strong trade ties between the two Black Sea nations and facilitate the establishment of new business links. With bilateral trade steadily growing, we also plan to hold a joint intergovernmental trade and economic commission in the near future.

Needless to say, Turkey and Ukraine have much more in common than burgeoning trade, growing cooperation in the military and technical spheres, and a shared commitment to ending the Russian occupation of Crimea.

As my recent talks with Mevlut Cavusoglu demonstrated, there is a lot of room for facilitating people-to-people contacts and deepening cultural and academic ties. With this in mind, we have agreed to establish a joint commission on historical research under the auspices of the Turkish and Ukrainian foreign ministries.

Southern influences have always played a prominent role in the shaping of Ukrainian foreign policy, and this remains very much the case today. In summer 2021, President Zelenskyy initiated the adoption of a National Foreign Policy Strategy, the first such high-level strategy document in the thirty years since Ukraine regained its independence.

This newly adopted document clearly defines Turkey as one of Ukraine’s most important strategic partners. It identifies a number of key focuses in the relationship such as free trade, military and technological partnership, and cooperation on large infrastructure projects.

Priority areas in the deepening strategic partnership between Ukraine and Turkey include strengthening security cooperation in the Black Sea region (with potentially heightened NATO involvement), Turkey’s ongoing engagement in the development of the Crimea Platform, and further joint efforts to protect the rights of the Crimean Tatars.

Ukraine and Turkey are developing a clear vision for the future security of the Black Sea region. It is time for NATO to begin viewing this Ukrainian-Turkish partnership as a valuable supplementary force that can help provide security and stability in the region.

Only the joint efforts of NATO allies including Turkey, together with the Associated Trio nations of Ukraine, Georgia and Moldova, will make it possible to prevent the Black Sea from falling under Russian dominance and becoming subject to Moscow’s destabilizing activities.

The earlier we send a clear signal to the Kremlin regarding our resolve and unity, the better. Nobody needs a conflict in the Black Sea. Indeed, the only power willing to provoke any fresh confrontations in the region is Russia. In the current security environment, projecting strength is the best way to deter Moscow and avoid any new escalations.

An increased NATO presence in the Black Sea neighborhood will significantly lower tensions and stabilize the region, not vice versa. Ukraine has been dealing with the Russians for a long time and understands their reasoning very well. The Russian leadership escalates only when they sense weakness. There is nothing more inviting from a Russian perspective than the indecisiveness of their adversaries.

At the same time, Russia respects strength and will not risk an escalation when they are confident of the other side’s resolve. This is exactly why Ukraine is calling for a greater NATO presence in the Black Sea region and expanding cooperation between NATO and non-NATO allies. The Turkish-Ukrainian strategic partnership is a good example that such cooperation is not only feasible but also highly efficient and mutually beneficial.

About the author: Dmytro Kuleba is Ukraine’s Minister of Foreign Affairs