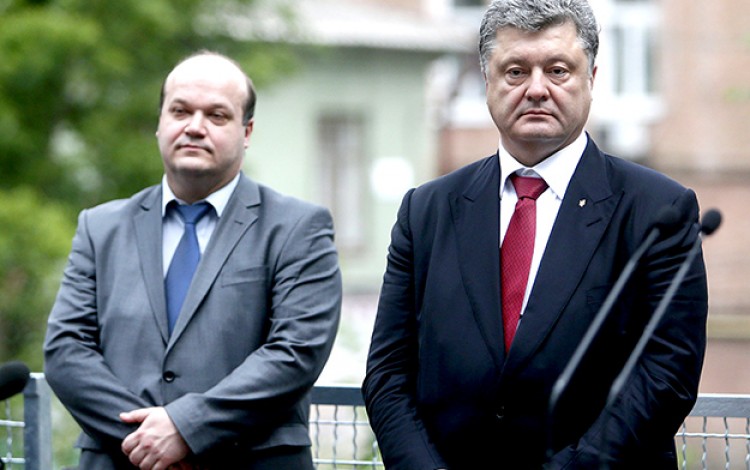 PR problems: Ukrainian President Petro Poroshenko and Ukrainian Ambassador to the US Valeriy Chaly must overcome image issues as they seek to forge ties with the incoming Trump White House
Taras Kuzio

As the reality of Donald Trump’s election victory began to dawn early on 9 November, former US Ambassador to Russia Michael McFaul Tweeted: “Biggest loser in the world tonight – Ukraine.” Many in Kyiv agreed. Donald Trump’s well-publicized praise for Vladimir Putin, coupled with the Kremlin ties of numerous figures within his inner circle, led many to assume a Trump presidency would spell trouble for Ukraine’s strategically crucial US alliance. Ukraine must now convince the incoming Trump administration that it deserves continued support. This would be challenging enough in itself. However, Ukraine must also contend with the image problems facing two of the country’s key representatives in the American relationship – Ukrainian President Petro Poroshenko and Ukrainian Ambassador to the US Valeriy Chaly.

Running out of excuses

President Poroshenko’s deteriorating image in the US capital mirrors his low approval ratings at home. Many in Washington DC have come to regard him as untrustworthy. They believe he never intended to pursue the publicly touted policy of “de-oligarchization”. Instead, he is seen as a man as who prefers to continue striking opaque backroom deals. This is close to perceptions of the President in Ukraine itself. Earlier this year, Ukrainian MP Serhiy Leshchenko summed up public frustrations when he wrote, “Instead of fighting against the oligarchs, the government forces them to make concessions and to share.” The fact that President Poroshenko is the only Ukrainian oligarch to have grown richer since 2014 has also raised eyebrows across the Atlantic. Ukrainians are unlikely to be buying more chocolate in wartime, after all.

Ambassador Chaly suffers from image issues of an entirely different nature. Ukraine’s current Ambassador to the US was President Poroshenko’s deputy when he briefly served as foreign minister at the end of Viktor Yushchenko’s presidency. Prior to that, he made his name at Kyiv’s best think tank, the Razumkov Ukrainian Centre for Economic and Political Studies.

Since his arrival in Washington DC in summer 2015, critics have accused Ambassador Chaly of being disorganized and unfocused. Like former Ukrainian Presidents Leonid Kravchuk and Viktor Yushchenko, Ambasador Chaly has a reputation as a poor communicator who is easily distracted and capable of speaking at length without actually saying anything. This trait is common enough among Ukrainian politicians, but that has not stopped detractors from labelling him as a windbag and a know-all who is prone to arrogance. These are dangerous qualities in someone charged with managing Ukraine’s most important diplomatic relationship.

President Poroshenko used to enjoy considerable prestige in Washington DC. In September 2014, he addressed the US Congress and received repeated standing ovations during a powerful speech that was widely recognized as historic in stature. This goodwill appears to have largely evaporated over the intervening two years of stuttering reforms and continuing corruption. In Washington DC political circles, it is becoming increasingly common to encounter the view that President Poroshenko is losing touch with reality and no longer listens to other people’s opinions. Many Ukraine observers in the US speak of a siege mentality taking over the Poroshenko presidency, leading the Ukrainian leader to view all critics and opponents as traitors in the pay of Russia. This blame game has done little to distract attention away from the phony war against corruption. Over the past few months, almost all the Ukraine specialists I spoke to have confirmed that they now view President Poroshenko as the single biggest obstacle to genuine reforms.

As the situation turns against him, many now fear President Poroshenko could become increasingly detached from contemporary political realities in the manner that befell Viktor Yushchenko – another Ukrainian leader initially lauded in Washington DC before falling out of favour when he failed to deliver. Poroshenko’s reputed self-image as a national saviour does not tally with his plummeting approval ratings and the general mood of discontent in the country, nor does it fit with the increasingly sceptical reception he now receives internationally.

Ambassador Chaly comes across as a loyal ally of President Poroshenko. This inevitably leaves him open to accusations that he was parachuted into a job for which he is not qualified. Unlike previous Ukrainian Ambassadors to America, Chaly is not a professional diplomat. Although every country sends political appointees as ambassadors, critics have argued that it is strategically unwise to appoint anyone but a veteran diplomat as envoy to the world’s most important country, especially when the bilateral relationship with the US is so crucial for Ukraine’s national security.

With a Trump White House now taking shape and the inauguration just weeks away, Ukraine needs to be able to call on its most seasoned diplomatic talents. Instead, Ukraine must compete with Russia for Donald Trump’s attention, while also dealing with negative image issues that threaten to undermine the country’s credibility.