POST-SOVIET TRANSITION: Darth Vader and the dark side of Ukraine's imperfect democracy 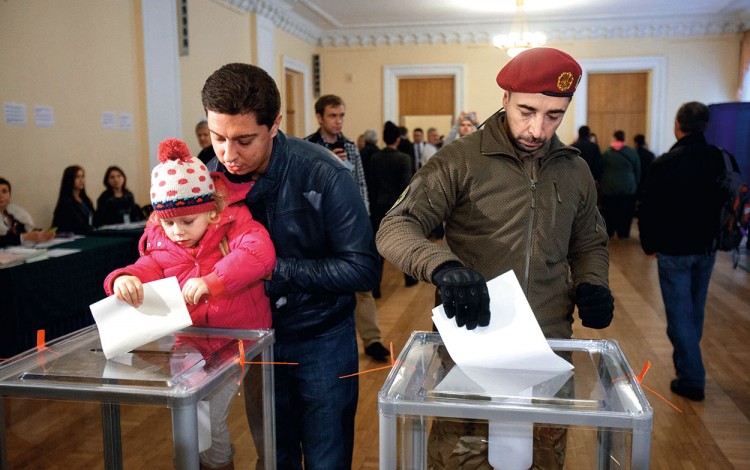 Ukraine’s recent local elections were imperfect. Many Ukrainians found themselves denied their democratic right to vote because they were located or registered in the temporarily occupied regions of Crimea and the eastern Donbas. Others living close to the front lines of the conflict zone found themselves similarly disenfranchised for wholly understandable yet regrettable reasons. It is simply too dangerous to hold elections within range of enemy artillery.

The election also attracted a few allegations of vote rigging, bribery, and other irregularities that will be all too familiar to anyone with experience of elections in the post-Soviet world. Despite democracy gains over the past decade, this still applies to Ukraine. While there are countries that have developed more or less foolproof systems for the conduct of transparent elections, these models have yet to be adopted in Ukraine. More should be done to improve the election process and make sure that all citizens can vote and all votes count. Learning from the experiences of, and adopting best practice from other countries is not that hard.

No system is perfect, of course. In Ireland earlier this year, there was a nationwide ballot on recognizing the rights of same sex couples to marry. In one memorable incident, a Russian monitor observing the vote count insisted that the process was flawed and invalid because “in such a large room, there are dark corners.” Maybe the gentleman was blinded by all the high-viz jackets the apolitical volunteer vote counters were wearing? He was apparently being serious and not ironic. The gentlemen’s objections duly noted, equality won by a fair margin anyway.

Such complaints are comical, but the lack of faith in the democratic system evident among segments of the Ukrainian electorate is no laughing matter. Negative perceptions abound, with many of the most common stereotypes and clichés serving to deter people from participating in a process that derives its legitimacy entirely from participation. If you ask any Ukrainian for their opinion on democracy, they will likely tell you that politics is a dirty business. All politicians are the same. None of them are any better than the others. My vote makes no difference. It’s all a joke. There’s no such thing as true democracy, anywhere. Everything is controlled by big business anyway. We the people, get no choice. The choice is between bad and worse.

Some of those things are partially true. Many of them are contradictory. They are all deeply flawed ideas that lead to a deterioration of the democratic system, but they are ideas that are commonly held by people even in such highly developed democracies as Australia, where voting is not just a right, but a legal obligation. I have also encountered similarly cynical attitudes towards democracy in Canada, where I have been party to some of the politest political disagreements of my life.

The reality is that the elements of truth in those statements are exploited, for political gain. We should recognise this and rise above it. The public should demand that such manipulations, and the reasons for them having elements of truth to them, cease. This is true wherever you are in the world.

Darth Vader and the dark side of Ukrainian democratic culture

In developed democracies, it is largely a quirky minority who hold such skeptical views about democracy, but such ideas are fundamentally dangerous trains of thought when they enter the mainstream in developing or underdeveloped democracies. Feeding such thinking is a very deliberate ploy by people who do not benefit from a democratic system. Let’s take, for example, the candidacy of ‘Darth Vader’ in various Ukrainian elections. It’s supposed to be funny. It is not. It panders to all of the above thoughts on the political sphere at a time when Ukraine can least afford it.

When Ukraine should be moving past the ‘they’re all as bad as each other’ stage and engaging in a proper discussion about whether one candidate’s vision or pledges has more merit than another, people are posting or tweeting photos of a new Darth Vader statue in Odessa which has wifi in its head. If you did this, you contributed to the ‘it’s all a joke’ narrative, and have done Ukraine a disservice.

In reality, not all politicians are the same. Some are genuinely motivated to represent their communities. At this critical time in Ukraine’s national progress, we should be focusing on helping the genuine community leaders in the country create platforms on which to compete for votes. People need to take their individual responsibilities as participants in the democratic process a lot more seriously. Not accepting payment for hanging a political promotional banner on your balcony when you know nothing about the candidate or his policies is one way of being more personally responsible. Refusing to sell your vote is another. Democracy is imperfect, and Ukrainian democracy is in many ways more imperfect than most, but it is still the best option the country has. Understanding democracy while challenging fallacies about democracy is crucial, and never more so than in Ukraine today.

About the author: Paul Niland is a long time Kyiv resident. He has written extensively about Ukraine’s recent history. He is also the founder of Statement Email, a charitable crowd funding platform