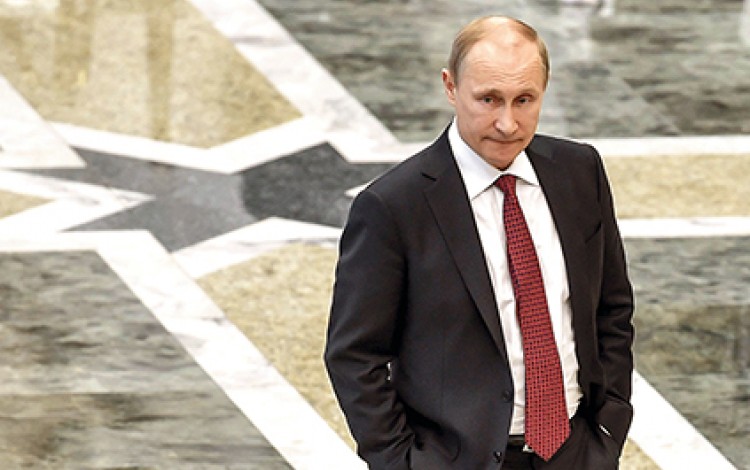 Russian leader Vladimir Putin hoped to seize half Ukraine with his 'Novorossia' hybrid war campaign - instead, he has captured an awkward enclave is is fast running out of options

The terms of the Minsk Peace Plan clearly stipulate the withdrawal of foreign (i.e. Russian) military forces from east Ukraine and the return of the international border to Ukrainian control. If the Kremlin meets both these conditions, most observers agree that Ukraine would be able to reassert control over the occupied east of the country within a matter of days. The international community would welcome this development, but it would spell doom for the current occupant of the Kremlin.

This reality makes Russian compliance with the Minsk Peace Plan extremely unlikely. Vladimir Putin currently finds himself effectively trapped in eastern Ukraine – unable to move forward due to Ukrainian resistance and international opposition, yet unable to withdraw for fear of sparking a nationalist uprising at home and exposing the evidence of his hybrid war.

The betrayal of Novorossia

Russian nationalists are already accusing the Kremlin of betraying the people of ‘Novorossia’ – the eight regions of Ukraine earmarked for conquest by Putin at the height of his spring 2014 imperialistic intoxication. Rather than claiming half Ukraine, the Kremlin has been restricted to a slither of border territory in the industrial south east of the country, which it has subsequently refused to annex.

This refusal has infuriated many on the increasingly crowded extremes of the Russian political spectrum, leading to accusations that Moscow has used the people of the Donbas as geopolitical pawns. Simmering anger in nationalist circles would likely explode into social unrest if Russia went a step further and actually withdrew its forces and weapons from east Ukraine.

Nor would this sense of anger be restricted to extremists. For the past two years, the Kremlin has used the state-controlled Russian media to nurture nationalist sentiment among mainstream domestic audiences. The process has been hugely successful, sending Putin’s approval ratings to record highs and strengthening the regime despite plummeting economic fortunes and growing international isolation. This has proven possible by depicting Putin as a national hero defending Russia (and the ethnic Russians of Ukraine) against international threats. The material suffering of ordinary Russians has been justified as the product of this struggle, which has seen Russia ‘rise from its knees’ after years of post-Soviet humiliation.

The majority of Russians have accepted this narrative, but their acceptance may be more fragile than many currently appreciate. If Russia ended its involvement in east Ukraine and returned the region to Ukrainian control, those beyond the nationalist camp would also begin to question the purpose of all the sacrifices they have made. Without the distraction of geopolitical grandstanding, these sacrifices would loom ever larger, leading to a spike in discontent. Putin’s approval ratings could crumble just as quickly as they shot up. As they surveyed the aftermath, ordinary Russians would see little but a crashing economy and international pariah status. The euphoria of the Crimea annexation would seem like ancient history.

Perhaps even more alarming than the domestic implications of a Russian retreat are the likely results on the international stage. The return of Ukrainian authority to the occupied regions of Luhansk and Donetsk oblasts would occasion the complete and irrefutable exposure of Putin’s long-denied hybrid war. Mountains of evidence would come to light overnight, providing detail about the scale of Russian military involvement and providing the basis for possible future war crimes prosecutions.

This evidence would take many forms. It is highly unlikely that the Kremlin would be able to remove all the military equipment shipped from Russia into occupied east Ukraine. The recent localized separatist withdrawal from Shyrokino highlighted the problems Russia faces in this regard, with the discovery of various items of Russian military equipment left behind by retreating militant forces. A large-scale withdrawal would inevitably leave behind vast quantities of Russian army kit.

Local witnesses would also be far more likely to share their knowledge of Russian involvement once the immediate threat of Russian retaliation had receded. Civilians living in the warzone would have much to tell, while a sense of betrayal may even encourage many former militants to expose the Kremlin’s duplicity.

Then there are the victims of Russian atrocities to consider. Hundreds if not thousands remain unaccounted for. Every town or city in the combat zone has basements converted into makeshift prisons and torture chambers. Accounts from survivors - together with evidence gathered from crime scenes - would lead directly to international war crimes prosecutions.

The graves of the dead would also have their story to tell. The Donbas is literally littered with the unmarked graves containing casualties of the conflict. Many of them are believed to be Russian citizens, including serving Russian soldiers and Russian army men killed while ‘on vacation’ in Ukraine. It is unlikely that the Ukrainian authorities would exhume individual bodies for DNA testing, but such dramatic steps cannot be completely ruled out.

It is far more likely that we would witness the macabre spectacle of mourning Russian families flooding into the region in search of answers about their missing relatives. How did they die? Where are they buried? This process would be devastating for the Kremlin on a number of levels, highlighting the human cost of Putin’s imperialism while reminding Russian audiences of Moscow’s disregard for those who gave their lives.

History is written by the winners. If Putin withdraws from east Ukraine, he will be denied this privilege. Instead, all the dirty secrets of the past two years will be hung out to dry. The only way he can avoid the complete and total exposure of his hybrid war - and the subsequent domestic and international problems this will entail - is to maintain a controlling influence in the occupied zones of east Ukraine. This inescapable reality makes it virtually impossible for Russia to fulfill its part of the Minsk Peace Plan.