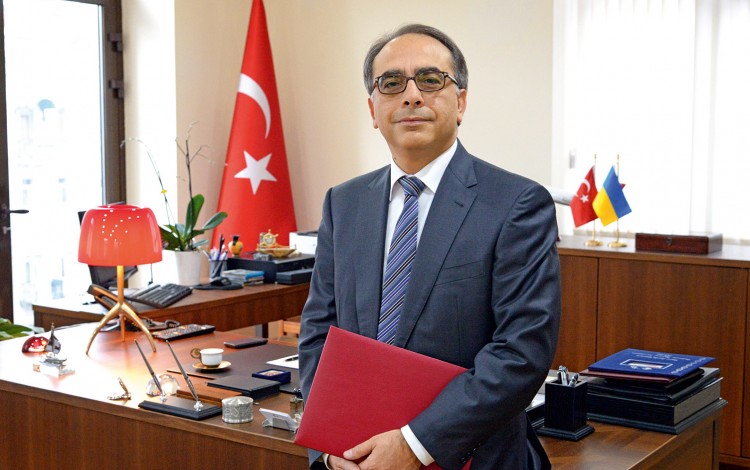 More of Turkey in Ukraine, more of Ukraine in Turkey. This is the motto of the Turkish Embassy in Kyiv. It rests on the view that increasing political, economic, social and cultural interaction between Turkey and Ukraine serves both nations. The comparative advantages of the two countries and their complementarity in many sectors create a rationale that is not limited to trade but also extends to multifaceted cooperation, joint ventures and joint production in different areas. Coincidentally, the same theme is evident in the symbolic bridge between Turkey and Ukraine depicted on the cover of this issue of Business Ukraine magazine.

Admittedly, we have yet to work towards fulfilling this objective and reach the concrete results that our potential promises. We know this is a gradual process, but it is achievable and things are moving in the right direction. We are no longer content to talk of “potential, potential, potential” alone. Some Turkish businesses in Ukraine, as our Embassy also recommends, are trying to explore possibilities to grow and to engage new sectors in Ukraine. We also encourage potential new Turkish investors to put Ukraine on their radars and come to see things on the ground.

Obviously, we try to avoid naïveté while encouraging them. Unfortunately, bad stories from the past, and some from the present day, cause understandable skepticism. Nevertheless, the broader truth is that Turkey believes in the future of relations with Ukraine. This future is promising across the board, encompassing trade, investments, agriculture, energy, defense, tourism, cultural contacts and much more. Ukrainian Prime Minister Volodymyr Groysman put it very aptly during his visit to Turkey in March 2017 when he said Turkey and Ukraine could cooperate in many fields, extending from the depths of underground mines all the way up into space.

A key requirement for this positive vision is already in place: Turkey and Ukraine have the political will at the highest level to start doing justice to the potential they share between them. The yearly meeting between Turkish and Ukrainian Presidents (the High Level Strategic Council) took place on 9 October in Kyiv. President Erdogan came to the Ukrainian capital accompanied by 10 Cabinet Ministers from Turkey. Significant agreements were signed including the Protection and Promotion of Mutual Investments and Avoidance of Double Taxation.

One missing element in bilateral economic relations is the Free Trade Agreement (FTA) that is the subject of negotiations for several years now. Turkish businesses look at the FTA as an indication of Turkish government confidence in the prospects of doing business with Ukraine. Indeed, FTA means more than just trade. It is also very much about investments. Turkey has bought much more from Ukraine than it has sold in the last 15 years. Ukraine’s trade advantage might continue after the FTA becomes a reality, but if we can succeed in making the pie bigger, both sides will win. With the FTA, it will be much easier to reach the trade target announced by the two Presidents to bring volumes up from today’s USD 4 billion to USD 10 billion by 2023. This is quite achievable, since the bilateral trade volume was close to USD 8 billion in 2008.

As Ukraine tries to attract investments, Turkish investors and businesspeople are watching. The negative image associated with “doing business in Ukraine” is now beginning to change. Indeed, Ukraine has started to find its own solutions to its problems. However, this is not happening fast enough or widely enough. Therefore, while encouraging greater Turkish engagement in Ukraine, we also need to be honest about continuing difficulties. As the Turkish saying goes, a true friend speaks the bitter truth.

The Ukrainian government is aware of these issues and trying to find solutions. Still, some past and present Turkish investors have yet to experience the positive change in Ukraine. Strange legal difficulties faced when trying to recover debts, repeated failures to pass legislation for a more competitive and fairer market, and problems associated with local partners and administrators who seem to stick to the ways of the past are common issues. These are not only costing engaged Turkish companies, but they are also keeping away a greater number of potential Turkish investors. From telecommunications to air travel, Ukrainian consumers end up deprived of better, faster technology and higher quality services at more competitive prices.

Overall, we need Ukraine’s big businesses to be more confident and the business environment to become more competitive and fairer. We had similar problems in Turkey in the past and not all of them have been fully resolved. However, big business, as well as smaller business owners, eventually adapted. They became shareholders in the new vibrant and competitive domestic market while extending their reach beyond Turkey. Ukrainian businesses can do the same.

Business is also inevitably linked with international politics. For example, Ukraine is asking its Western partners to better comprehend the security implications for Europe of what Ukraine faces in Crimea and the Donbas. This is a strong and justifiable argument. However, it may be that most of Ukraine’s partners do not really need to be convinced about Ukraine’s geopolitical importance. Rather, they seem to be in need of convincing that the new Ukraine that is emerging is genuinely different and is reliable as far as business is concerned. Political support and business investments often go hand in hand. After all, issues like good governance, rule of law, and the fight against corruption will make Ukraine resilient to all challenges. This is how Ukraine can become an asset for the whole region.

For its part, Turkey is clearly and strongly supportive of Ukraine. This is both a friendly, good-neighborly stance and a position that reflects Turkey’s own strategic goals. Turkish interests require a Ukraine that stands firmly on its feet. This means a free, independent and united Ukraine preserving its territorial integrity, including Crimea. Therefore, Turkey will continue to stand by Ukraine in multiple ways, with support ranging from the plight of the Crimean Tatars to the needs of Ukraine as it seeks to prevail in its reform process.

One area where Turkey’s experience may inspire Ukraine is the public-private-partnership (PPP) methodology Turkey utilizes with considerable success. Turkey has completed major infrastructure projects including metropolitan hospitals, bridges of impressive size, tunnels under the sea, and the world’s largest airports thanks to custom-designed PPP procedures. Experts from the Ministry of Economic Development and Trade are engaging their Turkish counterparts to see what is applicable in Ukraine.

Many Ukrainians have had the opportunity to observe the level of Turkish infrastructure and the quality of services for themselves while visiting Turkey. Last year more than a million Ukrainians visited Turkey; this constituted an increase of 48% from the previous year. By the end of this year, we expect to register a further increase on top of last year’s record.

There are two major Turkish-Ukrainian business associations working actively in Ukraine, the Turkish-Ukrainian Business Association (TUID) and the Turkish-Ukrainian Industrialists and Entrepreneurs Union (TUSIB). They offer valuable guidance to their members and other Turkish businesspeople contemplating investment in Ukraine. They also facilitate meetings bringing together businesspeople from both countries to explore joint endeavors. As reforms pick up pace in Ukraine, Turkish businesses, in cooperation with their Ukrainian partners, will increasingly deliver what they are best at, providing quality products and services at reasonable prices.

Connected by a Shared Past

The geopolitics of the twentieth century, for the most part, was unfair to Ukraine. Even in Turkey, just across the Black Sea, our intellectual memory of Ukraine weakened. We are now trying to remedy that. In the last few years, papers presented to scientific conferences organized jointly by Turkish and Ukrainian scholars reveal that Ottoman/Turkish/Tatar – Ukrainian relations were not continuously rooted in conflict as many had previously assumed. The reality is actually far from this negative portrayal. Our shared history includes many peaceful years and joint positions along with political and military alliances. This has left behind a legacy of common historical and cultural heritage. Evidence of this shared inheritance can be seen in the sphere of language and the introduction of many words of Turkish origin into modern Ukrainian such as meydan, shapka, kilim, izum, torba, tutun, sandik, bazaar, ambar, kazan, divan, leleka, and kahve.

The newly opened Yunus Emre Turkish Cultural Center in downtown Kyiv will be a venue for fostering our cultural relations with Ukraine. The Center will offer Turkish language courses and organize cultural events. Another positive link between Turkey and Ukraine is the work of TIKA (Turkish Agency for Cooperation and Coordination) which has been active in Ukraine since 1997. TIKA has completed over 400 projects in development assistance and humanitarian aid worth approximately USD 40 million.

Coming back to the Embassy’s motto, I also appreciate the active work in the same direction carried out by the Ukrainian Embassy in Ankara, led by the very dynamic Ambassador Andriy Sybiha. The rule of thumb for bilateral success for both sides seems to be “more of Turkey in Ukraine, more of Ukraine in Turkey.”