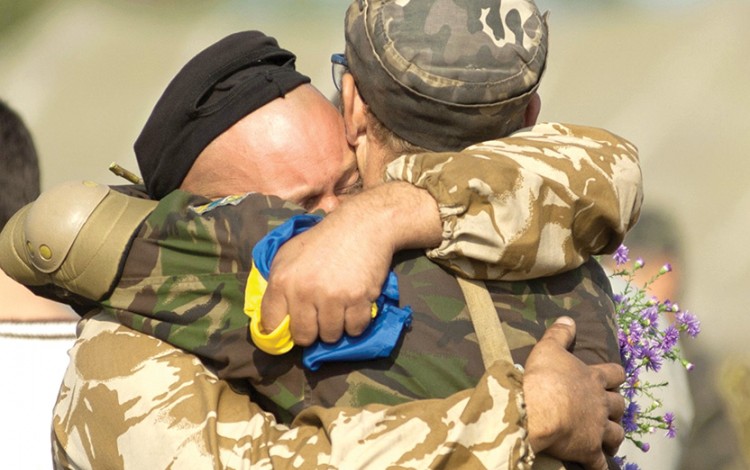 In spring 2014 Ukraine faced the very real possibility of ceasing to exist as an independent nation. It was saved by a wave of volunteerism that swept the nation and defied the Kremlin
Peter Dickinson, Business Ukraine magazine

One of the biggest blockbuster movies of summer 2017 looks likely to be “Dunkirk”, a WWII drama set on the beaches of northern France in summer 1940 as Hitler’s panzer armies closed in on pockets of trapped and surrounded allied forces. The film introduces global audiences to one of the most celebrated events in modern British history – the successful evacuation of over 300,000 soldiers by a makeshift armada of merchant shipping and pleasure boats manned by civilian volunteers who braved the Luftwaffe to cross the English Channel and bring the stranded troops home.

British audiences are already well aware of the legends surrounding Dunkirk – it has been part of the national fabric for the past seventy-seven years and remains a huge source of patriotic pride. Even today, “The Spirit of Dunkirk” remains a byword for British bravery and resourcefulness that serves as a rallying cry for any situation when all hope seems lost.

The mythologizing around Dunkirk has helped to cloud out the somewhat uncomfortable reality that it was actually a desperate retreat in the wake of an unparalleled military disaster. The Dunkirk evacuation was the last act in the collapse of allied resistance to the Nazi onslaught in Western Europe. It ranks among the most comprehensive defeats in the annals of British military history, yet it is remembered as one of the country’s finest hours.

This is not merely the result of clever wartime propaganda. Dunkirk continues to stir emotions because it celebrates the everyday Britons who rose to the challenge at a time of unprecedented national peril, sailing into the jaws of the Nazi war machine knowing that many would not return. It was an inspiring example of ordinary people thrust into extraordinary circumstances, and it has occupied a central place in English folklore ever since.

As Ukraine seeks to consolidate its post-Maidan national identity, the country could learn much from the British reverence for Dunkirk. The events of 2014 in Ukraine share much of the everyman volunteer drama that make the Dunkirk story so powerful, and could have a similarly galvanizing effect on Ukrainian national spirit if placed in the proper historical context.

In the spring of 2014, Ukraine faced seemingly overwhelming odds as Russia’s surprise offensive claimed Crimea and then spread into eastern regions of the Ukrainian mainland. There was an air of dreadful inevitability as town after town fell to Russian hybrid forces and their local collaborators. Ukraine’s threadbare military was hopelessly outmatched and clearly unable to defend the country. By mid-April, many in Kyiv were preparing for the imminent arrival of Putin’s “little green men” in the Ukrainian capital itself.

Then something incredible happened – ordinary Ukrainians took up arms and fought back. The volunteer battalions who helped bring the Russian advance to a halt were among the most ragtag formations in modern military history. Armed with whatever came to hand and often dressed in mismatching items of uniform, these largely untrained citizen soldiers were in the vanguard as Ukraine liberated town after town in late spring and early summer 2014. Behind them stood an entire nation of volunteers working to feed, fund, and outfit Ukraine’s improvised army. Together, they did enough to contain the Kremlin insurgency and convince Moscow that further escalation would prove prohibitively costly in terms of both blood and treasure. It was a military miracle more dramatic than the most far-fetched of Hollywood blockbusters, and it saved Ukraine from impending extinction as an independent state.

Much like Dunkirk, Ukraine’s military miracle of 2014 was not a glorious victory. It did not end the war or even fully liberate the country. Crimea and the eastern Donbas remain occupied, while Ukrainians continue to die on an almost daily basis. Nevertheless, the volunteer spirit of those fateful months has all the elements of a national epic. It is a story with the potential to play a prominent role in Ukraine’s nation-building efforts. Unlike narrow definitions of Ukrainian identity rooted in language and ethnicity, the volunteer narrative can unite modern Ukrainians of all backgrounds by emphasizing the diverse nature of the forces that came to the country’s rescue in its hour of need. As the volunteer battalions took shape, nobody asked whether someone was a Russian-speaker or a Ukrainian-speaker. Former Berkut officers and Maidan protesters stood shoulder to shoulder. Jews, Muslims, Catholics, Orthodox and atheists all marched together, indifferent to petty peacetime squabbles. In extremis, they found that they were all Ukrainians.

Inevitably, this surge in patriotic spirit was not universal. Many Ukrainians were opposed to the Revolution of Dignity itself and remained unmoved as the country struggled to resist Russia’s hybrid assault. However, even those who sympathized with the Kremlin’s initial “Russian World” proclamations might pause before condemning the volunteers who helped prevent cities like Odesa, Kharkiv and Mykolaiv from sharing the fate of Donetsk and Luhansk. The fact that Russia’s incursion has been limited to a small beachhead in Ukraine’s southeastern borderlands is reason enough to recognize the contribution of Ukraine’s volunteers. In the final analysis, they are the reason why tens of millions of Ukrainians are able to sleep soundly in their beds at night.

Ukraine has certainly not forgotten the volunteer heroics of 2014, but the country has not yet done justice to the scale of their achievement. This may be partly due to political expediency. The volunteer narrative serves as an awkward reminder of the Ukrainian state’s failure to provide the basic protection against foreign aggression that is the most fundamental responsibility of all governments. There is also presumably considerable discomfort among the country’s political leadership over the glorification of paramilitary formations that they struggle to control, alongside a reluctance to champion successes they cannot claim.

Others may argue that with the conflict still ongoing, it is simply too early to celebrate the inconclusive military reprieve of 2014. However, even the most optimistic observer would admit that there is currently no end in sight to the conflict. The present low-level fighting in eastern Ukraine may continue for many years to come. Ukraine cannot wait forever before moving forward.

A Story Worth Celebrating

In the absence of a Dunkirk-style Hollywood movie of their own, Ukrainians should focus on telling the stories of the everyday folk who joined the volunteer wave of 2014, including everyone from frontline fighters to online fundraisers. The names of these assorted bank managers, computer programmers, Afghan war veterans, students, and medics should become household words. There should be museums, public holidays, documentaries and TV specials. Most of all, the selfless volunteer ethos of 2014 should be recognized as the epitome of the Ukrainian national spirit.

Highlighting these relatively recent events makes a lot more sense than focusing public attention on the most controversial figures from Ukraine’s troubled twentieth century experience. The current emphasis on Stepan Bandera and Ukraine’s WWII-era independence fighters continues to divide Ukrainians and unnerve international allies, preventing many from fully embracing Ukraine’s cause. The outside world simply has no appetite for a nuanced debate over the appalling choices facing Ukrainian patriots caught between Stalin and Hitler, and is understandably allergic to any kind of association with wartime atrocities. At a time when sustained international support is absolutely essential for Ukraine’s future success, this matters more than ever. The twenty-first century volunteer movement is not without its own controversies and dark moments, but it has infinitely greater potential to unite the nation and engage global audiences.

All countries need their fair share of national legends, but the fact remains that Ukraine has spent much of the past twenty-five years arguing bitterly about the past. These memory wars have transformed Ukraine’s post-Soviet generation into hostages of their own history, preventing the country from developing a more coherent and inclusive sense of self. Ukraine’s historical narrative clearly requires a comprehensive reappraisal, but the current overriding priority must be national consolidation. This means placing the emphasis on themes with the potential to appeal to the majority of the population. The events of 2014 are tailor-made for this task. Like Dunkirk, Ukraine’s 2014 experience is a tale of breathtaking bravery with a cast of unlikely heroes drawn from every walk of life. The story of Ukraine’s volunteer miracle transcends politics, religion, ethnicity and ancestry. It is the story of a nation coming of age, and it has the potential to inspire Ukrainians for generations to come.