RUSSIAN HYBRID WAR AGAINST THE WEST

For the past three years, Russia has been waging an increasingly audacious hybrid war against the entire Western world. The end goals are to fatally undermine Western institutions and reverse the verdict of the Cold War. So far, the Kremlin is winning. Will the West finally fight back in the coming year? 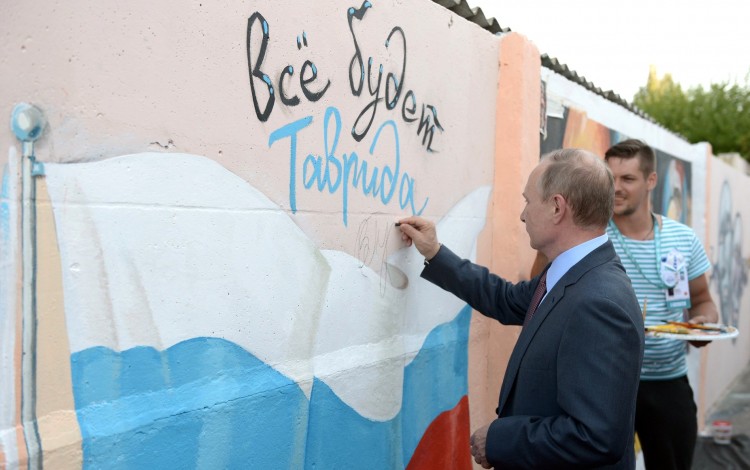 Vladimir Putin signs a mural during a summer 2016 visit to the Russian-occupied Ukrainian peninsula of Crimea. The 2014 invasion of Crimea marked the start of a hybrid war between Russia and the West that many in the US and EU refuse to acknowledge
Peter Dickinson, Business Ukraine magazine

Ever since Russia launched its stealth invasion of Crimea in February 2014, analysts have struggled to define this novel form of international aggression. The combination of information attacks, unmarked military forces, and diplomatic denials employed by the Kremlin in Ukraine has proved remarkably effective. It has paralyzed the international community, creating an air of ambiguity that has provided ample excuse for inaction. This is the essence of hybrid warfare – a strategy designed to keep opponents too confused and uncertain to launch effective countermeasures. Russia is now using similar techniques to wage a far broader hybrid war against the entire Western world. The success of this campaign depends almost entirely on the West’s refusal to acknowledge the scale of the threat it is facing.

The West’s collective desire to downplay Russia’s actions is understandable. For the past quarter century, the citizens of the world’s most developed democracies have grown used to thinking of international conflict as part of a primitive and increasingly distant past. While warfare has continued to plague the rest of the globe, the nations of the EU now struggle to entertain the possibility of a direct threat to their incomparably comfortable way of life. Cosseted in this illusion of mutually self-interested security, many find it inconceivable that a fellow member of the global elite such as Russia could be actively plotting to undermine the very institutions that provide the foundations for today’s unprecedented prosperity. It is far easier to explain away each successive example of Russia aggression as a justifiable, albeit disagreeable, response to a particular grievance.

This sentiment has fuelled portrayals of the hybrid war in Ukraine as an understandable response to Western encroachment of Moscow’s historic sphere of influence. We heard similar arguments in 2008 when Russian tanks rolled into Georgia. It was much the same in 2007 when Kremlin hackers sought to cripple tiny Estonia’s e-infrastructure. Such are the fruits of appeasement. Rather than placate the Kremlin, this absence of pushback has merely encouraged Russia to expand the scope and ambition of its hybrid war.

Inevitably, the costs of the West’s ostrich-like refusal to recognize Russian realities continue to mount. More than ten thousand Ukrainians lie dead. Aleppo is in ruins. Extremism is on the march across Europe. America has a president-elect who openly sides with the Kremlin over and above the analysis of his own security services. The phenomenon of fake news has expanded from Kremlin quirk to major international security threat. These developments are all part of the Russian campaign to shatter the certainties of post-1991 democratic hegemony.

There is considerable incomprehension over why Russia would want to set itself on such a destructive path. After all, isn’t Russia fundamentally part of the same civilization as the rest of Europe? The harsh truth is that modern Russia simply cannot compete in a world where soft power is the preferred method of gaining and maintaining international influence. The Russian economy is too weak, while the Russian system of government is too corrupt and authoritarian. Faced by this uncomfortable reality, the Kremlin favors a strategy of limited military intervention in neighboring countries, coupled with efforts to reduce the allure of the Western world via a cocktail of hacks, fakes, cyber attacks, and conspiracy theories. Rather than attempting to demonstrate its own attractiveness, Moscow promotes a melancholy message that can be summed up as, “See? You’re just as bad as us.”

The end goal of all this hybrid aggression is not global conquest. The Kremlin’s territorial ambitions are relatively limited in scope and probably do not extend beyond the borders of the former Soviet Empire. Instead, Russia seeks a divided and self-doubting Western world that will allow the Kremlin to consolidate its authoritarian agenda at home while subjugating the nations on its periphery. If non-Soviet nations are not under direct physical threat of invasion, why should they care enough to confront Russia? This is the big question facing today’s Western leaders. Does the idea of European disunity concern them? Are they indifferent to a world of increasingly militarized societies and nuclear proliferation, where the inevitable emergence of rival alliances would set the stage for a return to the Great Power conflicts of earlier centuries? This is the vision promoted by the Kremlin.

There are signs the West is slowly waking up to the scale of Russia’s objectives. The election of Donald Trump was a landmark event in this process. Government officials in Washington DC, London, and Berlin are now openly speaking about a Russian hybrid war against the West. Nevertheless, this belated recognition among policymakers has yet to filter down to the public, where talk of a Russian threat continues to provoke accusations of warmongering. Western society remains hamstrung by the insularity of public opinion, with over-confident populations focused exclusively on internal inadequacies that render them blind to external enmity. This could lead to further disasters in 2017. With elections in France, the Netherlands, and Germany on the horizon, Russia’s hybrid war is set to enter a new phase. The next 12 months could well prove decisive for the future of Western civilization. Russia has made its intentions clear to all but those who refuse to see. Policymakers and opinion formers in the West must now decide if they agree with the Kremlin’s critiques, or, in the final analysis, whether they would rather defend the flawed democracies and imperfect institutions that first allowed the West to outperform the rest.