Euromaidan second anniversary: where would Ukraine be today without 2013-14 pro-democracy mass protests? 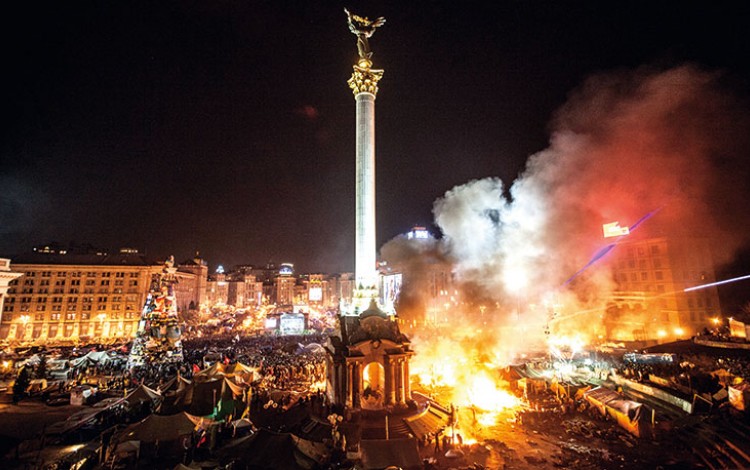 November will see the second anniversary of Ukraine’s Euromaidan protests, which erupted in autumn 2013 over the Yanukvoych government’s sudden U-turn away from the signing of an Association Agreement with the European Union. What began as modest street protests spiraled into a mass movement after the authorities unleashed riot police against protesters, with millions eventually taking part in rallies as a hardcore of activists occupied government buildings and set up a sprawling tent city in the middle of Kyiv.

By early 2014, an initially peaceful protest movement driven by demands for closer ties with the European Union had become a deadly showdown between a regime fighting for its life and activists determined to secure a European future, whatever the cost. The first protester fatalities occurred in January and the violence reached a bloody climax in late February, with dozens of protesters killed in downtown Kyiv.

In the wake of the massacre, President Yanukovych fled the country and reappeared in Russia, where the Kremlin-controlled mainstream media began promoting claims that he had been ousted in a ‘fascist coup’. Within days, Russian troops had invaded and occupied Ukraine’s Crimean peninsula. These same unidentified Russian troops would reappear in east Ukraine weeks later, plunging the region into a conflict that continues to smolder.

Little to cheer on Euromaidan anniversary

As the second anniversary of the Euromaidan protests approaches, Ukraine is experiencing a number of major challenges including war weariness, a severe economic recession and widespread public exasperation at the lack of progress to implement the anti-corruption reforms that served as the key demands of the protesters. Few will be in the mood to celebrate the Euromaidan anniversary, while many are inevitably asking whether the country would have been better off if the protests had never taken place at all.

It would be hard to argue that the past two years of war, instability, and economic crisis have been a positive period in Ukrainian history, but the counterpoint to this position is the argument that the Yanukovych government was clearly locked into an authoritarian trajectory that made some kind of fundamental confrontation inevitable.

Others have pointed to the historic gains to come out of the Euromaidan Revolution, such as the consolidation of Ukrainian national identity that has taken place across the country over the past two years – especially in response to Russian aggression in Crimea and east Ukraine. Millions of Ukrainian citizens who had previously harbored ambiguous feelings towards Ukrainian national identity have embraced a new and inclusive sense of Ukrainian unity rooted in European ideas of democracy that transcends narrow ethnic and linguistic interpretations.

A vast volunteer movement has sprung up, fueling a military miracle that succeeded in preventing Russian proxy forces from breaking out of an enclave in the far east of the country. An entire generation has mobilized, with implications that will reverberate at the grassroots level for years to come.

Ukraine has also emerged from Russia’s shadow on the global stage, gaining unprecedented international attention after decades in the shadows. Even the least informed of observers now knows that Ukraine is not part of Russia, as many outside observers had long incorrectly assumed.

Tribunal of history yet to deliver verdict

These largely unquantifiable gains may turn out to be profoundly important, but there is already no doubt that they have come at a terrible cost. Was it worth it? The tribunal of history has yet to deliver its verdict, and much will depend on the ability of the current and future leadership of Ukraine to live up to the ideals that motivated millions of ordinary Ukrainians to take to the streets in the historic winter of 2013-14. At present, the outlook is not particularly optimistic.

To mark the anniversary of the protests, Business Ukraine magazine invited veteran Ukraine analyst Taras Kuzio to consider where Ukraine would be if the Euromaidan Revolution had never taken place. He reaches the conclusion that a protest movement of similar proportions would inevitably have happened at a later date, and would likely have taken place during scheduled presidential elections in early 2015.

Taras Kuzio: If Ukraine’s then-President Viktor Yanukovych had gone ahead and signed the EU Association Agreement in November 2013 at the European Union Eastern Partnership summit meeting in Vilnius, he might still be in power today as he could have boosted his dropping popularity. But it was not to be. Instead, Russian President Vladimir Putin knew of Yanukovych’s fondness for money and bought him off, hoping he would become Ukraine’s ‘Kadyrov’. The plan was destined to fail. Yanukovych never understood that Ukraine is not the Donbas, and Putin never understood that Ukraine is not Little Russia.

If the EU Association Agreement had been signed in the autumn of 2013, there would obviously have been no Euromaidan protests, and Ukraine would have held presidential elections in January 2015, which Yanukovych would have been determined to win at all costs. Even with the boost provided by the signing of the EU Association Agreement, this would have required him to use far more election fraud and thuggish vigilantes than he used in the 2004 elections that provoked the Orange Revolution. If he had not signed the EU deal, even more extreme measures would have been required to win the 2015 vote.

Yanukovych’s popularity in 2004 was comparatively high as he had been a relatively popular Donetsk governor. His criminal past was less well known, he was largely unknown on the national stage, and Ukraine was experiencing robust economic growth. At the time of the scheduled presidential vote in 2015, economic growth would have been sluggish at best, or the country would have been in recession. Yanukovych would have had low popularity ratings even if he had generated some patriotic support from signing the EU Association Agreement. How could he have hoped to increase his popularity from 20%-30% to over 50% in order to win the second round of the elections?

His opponent might well have again been Yulia Tymoshenko, who thrives on the kind of political competition where she can mobilize protesters and use vitriolic rhetoric against her opponents (conversely, in 2014 Tymoshenko had no chance of victory against the centrist and soft-spoken Petro Poroshenko). With Yanukovych fighting for his political future and Tymoshenko rabble rousing, the odds are that a popular revolution would have been provoked.

In other words, the Euromaidan uprising would still have taken place – but it would have happened a year later. Therefore, to argue that Russia’s annexation of Crimea and hybrid war in the Donbas were caused by a ‘putsch’ or ‘coup’ is misplaced, as Russia would have acted in the same manner in spring 2015 in response to similar popular protests against the Yanukovych government. Neither Putin nor Yanukovych accept the right of their people to protest against electoral fraud, and both firmly believe coloured revolutions are Western conspiracies.

About the author: Taras Kuzio is the author of ‘Ukraine. Democratization, Corruption and the New Russian Imperialism’ (Praeger, 2015)