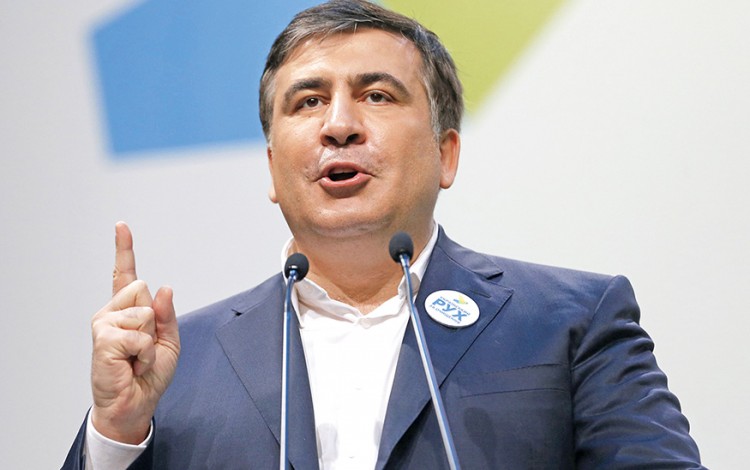 The most daring appointment of 2015 in Ukraine was undoubtedly President Poroshenko’s decision to place Mikheil Saakashvili as Governor of Odesa Oblast. Mr. Saakashvili’s appointment was announced at the end of May, and he has rarely been out of the national headlines ever since. His achievements on the ground in Odesa have been modest, but his impact on Ukrainian politics has been disproportionate when compared to his theoretically limited regional role.

Over the past half year, the Georgian has launched a one-man crusade against continued corruption among the Ukrainian political elite. He has repeatedly named names and confronted many of the most senior figures in the Ukrainian government - notably Prime Minister Arseniy Yatsenyuk. This combative approach has proved hugely popular with the Ukrainian public. Opinion polls have regularly positioned Mr. Saakashvili as the country’s most popular – or perhaps least -hated – politician.

His popularity has withstood a barrage of assaults – both from unfriendly Ukrainian media controlled by forces allied with his political opponents, and from Russia. Mr. Saakashvili is regarded as one of Vladimir Putin’s most outspoken personal enemies, and the Russian leader has been predictably withering in his criticism of the Saakashvili role in Ukraine. Closer to home, those targeted by his anti-corruption accusations have sought to undermine his credibility, with frequent references to the abuse of office charges he faces in his native Georgia.

None of this seems to have made any discernable impact on Ukrainian public opinion. At a time when Ukrainians are desperate for change and eager to see signs of an end to the deep-rooted corruption of old, Mr. Saakashvili has emerged as the one politician who says what the majority of the country is thinking. His perceived lack of involvement in the institutionalized corruption schemes that characterize the oligarchic Ukrainian political model has also helped to boost his credibility among ordinary Ukrainians. Unlike most of the Ukrainian political elite, Mr. Saakashvili does not have the shadow of great personal wealth hanging over him, forcing opponents to resort to petty smears and sexual innuendo instead.

The Georgian’s popularity stands as testament to Ukrainian multicultural tolerance and serves to undermine Kremlin efforts to portray the country’s post-Euromaidan national awakening as a xenophobic lurch towards extremism. Various attempts to demonize Mr. Saakashvili as a foreigner have led to widespread condemnation – so much so that those questioning the Georgian’s right to meddle in Ukrainian affairs have been forced to publicly backtrack. This tolerance reflects broader Ukrainian acceptance of foreign figures in government. Mr. Saakashvili is just one of a number of foreigners to have been granted Ukrainian citizenship and appointed to high office since the Euromaidan Revolution. As a former head of state, he is by far the most high profile member of Ukraine’s foreign legion. He has used this status to great effect throughout the second half of the past year to serve as a mouthpiece for anti-corruption campaigns.

What does 2016 hold for Mr. Saakashvili? Ever since his appointment as Odesa Governor, pundits in the Ukrainian capital have openly debated his next move. Most assume he is currently being groomed for a senior government position in Kyiv and believe it is only a matter of time before he is appointed to a ministerial post, or perhaps even takes Arseniy Yatsenyuk’s place as Prime Minister. Many have even expressed surprise to find him entering the New Year still based in the Black Sea port city at all.

Talk of a switch to Kyiv may still be premature. Ukraine’s US and EU partners have both made their preference for Ukrainian governmental stability clear, while the removal of PM Yatsenyuk would almost certainly spark fresh parliamentary elections. This means that immediate changes at the top table of Ukrainian politics are probably not on the cards. Instead, Ukraine’s priority must be a period of relative stability that will allow reforms to take root.

In line with this scenario, Mr. Saakashvili will likely spend early 2016 in Odesa. He will continue to act as an anti-corruption crusader, and will continue to build up his own political base in the country. Work on a Saakashvili-led political party already appears to be well underway, and there can be little doubt that he would poll strongly in any preterm parliamentary elections. He can probably count on the support of numerous MPs within the recently formed anti-corruption faction of President Poroshenko’s parliamentary party, while he is likely to recruit a range of fresh faces from business and civil society if he does indeed establish a distinct reformist party. Mr. Saakashvili’s appointment of 26-year-old Yulia Marushevska in autumn 2015 to head the Odesa Port Customs Service was a clear indication of his attitudes towards personnel issues. Ms. Marushevska has no experience in public administration but is a Western educated and media savvy figure untainted by corruption – exactly the kind of candidate Mr. Saakashvili will seek if, as expected, he forms his own political party in the coming year.