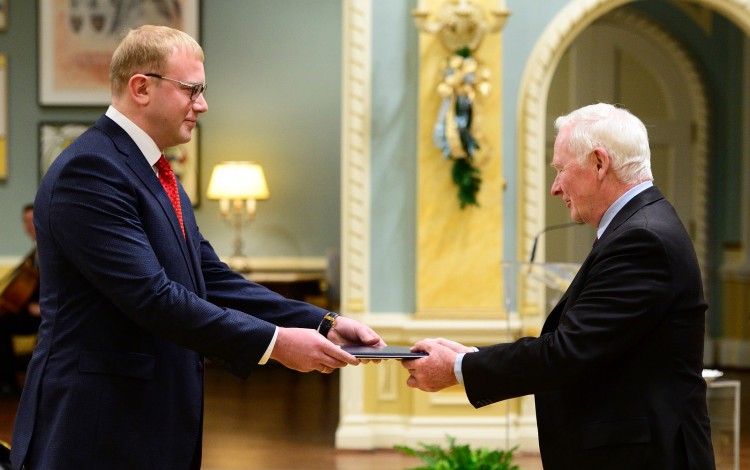 About the interviewee: Andriy Shevchenko (left) is the Ukrainian Ambassador to Canada
Business Ukraine magazine

“One of my key messages to Canadians is that today’s Ukraine is the eastern frontier of the free world. This creates considerable risks and fantastic opportunities,” explains Ukraine’s Ambassador to Canada Andriy Shevchenko during one of a series of recent telephone interviews with Business Ukraine magazine. ‘Eastern frontier of the free world’ is exactly the kind of attention-grabbing sound bite that comes naturally to Shevchenko, reflecting an earlier career in journalism that was arguably even more successful than his subsequent foray into the rough and tumble of Ukrainian politics.

Still only forty years of age, Shevchenko was already a household name in Ukraine by his mid-twenties thanks to his role as Chief Editor of pioneering independent TV channel 5 Kanal during Ukraine’s Orange Revolution. Initially best known to the Ukrainian public for sharing the same name as the country’s most celebrated footballer, Shevchenko became a celebrity in his own right when he led the 5 Kanal newsroom as it almost single-handedly pushed back against the tide of Kremlin-style state censorship during the winter 2004 popular uprising.

In the wake of the Orange Revolution, Shevchenko became one of a number of public figures and media stars to enter the Ukrainian parliament. He went on to serve three terms as an MP in Yulia Tymoshenko’s party, earning himself considerable kudos as the advocate of human rights and greater government transparency. In the October 2014 parliamentary election, Shevchenko fell victim to Yulia Tymoshenko’s temporary slump in popularity, finding himself too far down the Tymoshenko party list to enter the country’s first post-Maidan parliament. Instead, he was offered his first diplomatic role as Ukrainian Ambassador to Canada, arriving in his post in December 2015.

Shevchenko was an interesting choice for this strategically crucial position. His lack of experience in the diplomatic service is undeniable, but he brings extensive media and political knowhow to the post, along with excellent English-language skills and the kind of unsullied reformist credentials that allow him to serve as a credible representative of the new Ukraine. He claims his time in Ukraine’s parliament is particularly valuable when dealing with Canadian MPs. “I’ve been in their shoes and so I can see things from their perspective.”

Showcasing the unsung achievements of the new Ukraine

Shevchenko says communicating the changes taking place in post-Maidan Ukraine is one of the Embassy’s top priorities – especially when it comes to tackling rampant corruption and creating the kind of business environment capable of enticing greater Canadian investment into Ukraine. Like many Ukrainian reformers, he argues that the country’s reform agenda achievements do not currently receive the attention they deserve. “There are obvious issues with corruption, but there is also obvious progress,” he says, pointing to the success of the ProZorro electronic public procurement system as an example of what can be accomplished via a combination of political will, civil society participation and international support. Shevchenko believes the recently inked free trade deal between the two countries can play an important role in boosting bilateral trade while also bolstering reform efforts in Ukraine via the adoption of international norms on issues including intellectual property rights. “The challenge now is to build on the existing emotional and historic bonds between Canada and Ukraine to develop a pragmatic and mutually beneficial partnership.”

These historic bonds are rooted in Canada’s large and well-established Ukrainian diaspora, which will begin celebrations in the coming months to mark its 125th anniversary. Shevchenko is full of praise for the role of the diaspora in Canada, but says Canadian support for Ukraine goes far beyond the boundaries of these ancestral ties. “Canada is a society of values with a strong commitment to human dignity. This is why Canada has been so outspoken in its support of Ukraine’s right to define its own destiny.”

Canada and Ukraine also have a common interest in defending international law and the post-WWII security system. Since the outbreak of Russia’s hybrid war in Crimea and eastern Ukraine in 2014, Canadian trainers have played a prominent role in efforts to improve Ukraine’s military capabilities. Meanwhile, Canadian troops will be among those deployed to NATO member states in Eastern Europe in response to the heightened threat posed by Russian aggression in Ukraine. Shevchenko describes Canadian attitudes on defence cooperation as ‘very clear’ and says the two countries share a commitment to countering Russia. “We have a common security interest. We have the same neighbour that does not respect the rules and resorts to the use of force instead. The key security issue for both Ukraine and Canada is the need to make Russia respect the rules.”

As well as bilateral security cooperation at the governmental level, Ukrainian society has also received considerable support from the Canadian diaspora. Shevchenko is full of admiration for the widespread spirit of Ukrainian-Canadian volunteerism he has encountered, and highlights the evolving nature of this support since the Euromaidan Revolution. “As the situation has changed in Ukraine, needs have also changed. In 2014, there was a need for basics like military uniforms and first aid supplies. Today, Ukraine requires help providing psychological care for soldiers coming home from the front. The Canadian diaspora has adjusted to these needs.”

Despite these efforts, Shevchenko says many Ukrainians do not fully appreciate the depth of the Canadian diaspora’s emotional bonds with Ukraine, and admits that some in Ukraine continue to regard the diaspora as a wealthy but distant community. He hopes to be able to combat such misconceptions. “I don’t think many people in Ukraine really understand the scale of the Ukrainian presence in Canada,” he comments. “I have discovered a whole new continent of Ukrainian life.”