Ukraine’s Joan of Arc emerges from Russian prison as discontent mounts over President Poroshenko’s perceived failure to live up to the high hopes of the Euromaidan Revolution - but is the undoubtedly iconic Nadiya Savchenko really ready to take on the challenge of political leadership? 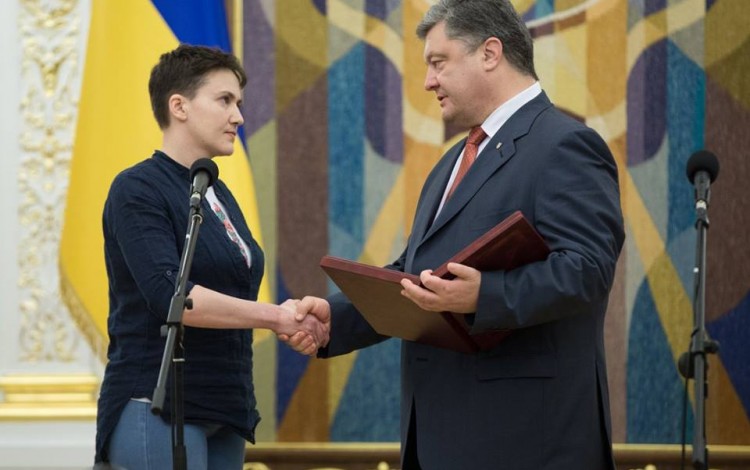 Nadiya Savchenko became a national hero during her incarceration in Russia - but can she now make the transition into the notoriously dirty world of Ukrainian politics?
Taras Kuzio

President Petro Poroshenko trumpeted the triumphant return of Nadiya Savchenko to Ukrainian soil in late May, but many commentators are already predicting she will soon become one of his biggest critics. In her first public statements following release from Russian prison, Savchenko spoke bombastically of ‘finishing the revolution’ and more than lived up to her unofficial status as Ukraine’s Joan of Arc.

Savchenko’s uncompromising stance echoed the views of the Ukrainian soldiers I met during a recent trip to the front lines in eastern Ukraine. Not a single soldier had anything positive to say about President Poroshenko, while most were scathing in their condemnation and blamed him for betraying the ideals they were fighting for. In Savchenko, they will see a kindred spirit untainted by the failures of the post-Maidan period who possesses the courage to voice their concerns fearlessly.

Who, exactly, is Nadiya Savchenko, and what are her political beliefs? At this stage, it is difficult to say. The iconic pilot’s regular acts of defiance in Russian courtrooms over the past two years inspired Ukrainians and caught the imagination of the watching world, but the many memorable one-liners she offered up do not represent a political manifesto. In reality, it is still far too early to even begin the process of assessing her political philosophy. However, initial indications strongly suggest a hardline approach driven by passionate patriotism and a willingness to defend the sacrifices of Euromaidan and the national resistance to Putin’s hybrid war. It is extremely hard to imagine her being anything but a scathing critic of the Minsk Accords.

Talk of a national role may seem overstated given the fact that Savchenko was completely unknown to the Ukrainian public prior to her imprisonment by the Kremlin. This skepticism fails to take into account the strength of emotion generated by her courageous conduct in Russia, or the levels of frustration felt towards the country’s current leadership. Savchenko may be a political novice but she currently enjoys levels of moral authority beyond the wildest dreams of Ukraine’s discredited political classes. Already an MP following election to parliament in 2014 during her incarceration, she has gone straight from her Russian jail cell to a position of national prominence. She is the number two person on Yulia Tymoshenko’s party list and a member of the Committee on National Security and Defence. Many observers now believe Savchenko has the ability to reenergize Ukraine’s faltering revolution, which has run aground amid accusations of political indifference and outright sabotage. This tide of criticism is increasingly focusing on President Poroshenko himself, who has succeeded in consolidating his grip on power but removed any potential scapegoats in the process.

President Poroshenko’s recent appointment of close ally Yuriy Lutsenko as Ukraine’s new Prosecutor General will only add fuel to accusations of betraying the Euromaidan Revolution. By choosing an unqualified loyalist for the post, Poroshenko seems to be following the disastrous example of Viktor Yushchenko, another Ukrainian president brought to power by a popular uprising who failed to live up to expectations. Indeed, when I first read about Lutsenko’s appointment, I immediately thought of Roman Zvarych 11 years ago. Does anybody remember his scandal? Back in 2005, President Yushchenko appointed one of his ‘dear friends’ (‘lyubi druzi’) Zvarych to the post of Justice Minister, despite the fact that he appeared to have no legal qualifications for the position. Zvarych not only lacked the requisite legal training – soon after taking office, he faced accusations of falsely claiming to have an MA and PhD from Columbia University. At the time, I commented on his denials: "Instead of accepting guilt, he's done the same thing the Kuchma regime had always done and claimed there's a conspiracy against him. That is not a good sign for the new government. It is essentially the same tactics as in the Kuchma era.” Zvarych only lasted eight months in his ministerial position. It will be interesting to see if Lutsenko lasts any longer.

President Poroshenko could have shown his commitment to Ukraine’s Europeanisation by appointing a young, English-speaking, Western trained lawyer as the Prosecutor General. Instead, his choice of Lutsenko suggests a rejection of the European values championed on Maidan and return to the old ‘business as usual’ approach to Ukrainian politics. This appointment of Ukraine’s fourth weak prosecutor general in a row since the Euromaidan Revolution cannot be written off as mere political expediency. President Poroshenko and acting head of state Oleksandr Turchynov before him must take joint responsibility for the appointment of a series of ineffective prosecutor generals, demonstrating that neither the Narodny Front nor the Petro Poroshenko bloc they represent ever had any intention of bringing fugitive ex-president Viktor Yanukovych or his kleptocratic clan to justice. This signals a complete lack of political will to improve the rule of law situation in the country or combat high-level corruption. To paraphrase the famous saying, history repeats itself in Ukraine first as a farce, second as a tragedy, third as a repeated mistake, and fourth as open sabotage.

As a direct result of these appointments, Ukraine’s two current parties of power now stand accused of openly undermining Ukraine’s European integration. Without reform of the prosecution service, all other attempts to fight corruption are redundant. Ukraine’s current 20,000-strong prosecution service is approximately 300% over-manned (Great Britain, for example, has 8,000 prosecutors in its Criminal Prosecution Service despite having a population around 50% larger than today’s Ukraine). The ridiculous uniforms and political culture of Ukraine’s prosecution service demonstrate that it is still a Soviet institution at heart, with little or nothing in common with the rule of law.

A number of broad conclusions appear possible in the wake of President Poroshenko’s decision to appoint Lutsenko. Ukraine looks set to remain politically unstable as long as civil society, journalists and those political parties committed to European integration find themselves confronted by oligarch-backed Kuchma-lite political forces intent on blocking moves towards genuine justice and the rule of law. This confrontation has been underway for over two decades and it will certainly continue. However, when viewed from a broader historical perspective, the ultimate victory of the country’s Europeanizing forces begins to take on an air of inevitability.

Ukraine’s European integration has gone through a number of transitions since 1991, but since 2010 it has entered a critical phase that can be split into two strategic stages. In the first stage, Ukrainian patriotic forces were able to secure a decisive victory over the neo-Soviet forces behind the Yanukovych presidency and the Kremlin’s failed ‘Novorossia’ project. In today’s Ukraine, pro-Russian and pro-Eurasian sentiment are at all-time lows – especially among younger demographics. The next stage of the contest is only just beginning – this is the phase pitting Ukrainian patriots against the remaining Soviet institutions still controlled by the Kuchma-lite parties blocking Ukraine’s Europeanization.

Pro-European forces inside Ukraine will be able to count on the support of many vocal advocates of a European Ukraine outside the country, who will be calling on key allies such as the US, EU and IMF to be far tougher in terms of the conditions they attach to financial and political assistance. Ukraine’s international partners have a potentially major role to play in the process of marginalizing the entrenched Soviet institutional structures in contemporary Ukraine by demanding an end to the sabotage of reform efforts in return for crucial aid and diplomatic backing. Nevertheless, the scale of the challenge should not be underestimated. The current levels of resistance to reform reflect the continued influence of the old guard and the lengths they will go to in order to maintain the status quo.

No counter-revolution this time

There is growing consensus among Ukraine watchers that with the appointment of Lutsenko, Poroshenko’s presidential term is now entering a period of prolonged stagnation, just as Yushchenko’s presidency did in 2008-2009. The only difference is on this occasion there will be no subsequent counter-revolution led by a new Yanukovych. Instead, there is much more likely to be a push to ‘finish the Euromaidan Revolution’. The big question at present is whether this reloaded revolution will be led by Nadiya Savchenko and her current political patron, Yulia Tymoshenko.