OPINION: If Ukrainian MPs can't show respect for Ukraine why should anyone else? 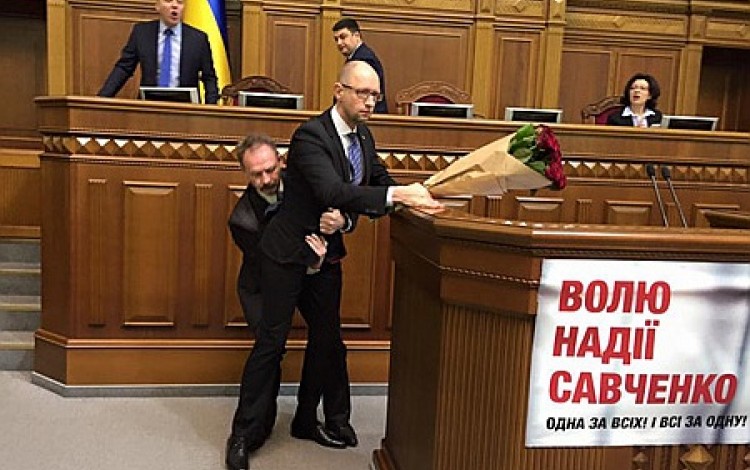 While studying at university in England, I signed up to serve in the Officer Training Corps – the undergraduate wing of Britain’s part-time Territorial Army. It was to prove a short and undistinguished military career. Within a matter of months I had been dishonourably discharged, my dreams of martial glory derailed by a refusal to spend my student years being rudely awoken at 5am to the sound of bagpipes.

Nevertheless, I gained some useful insights during my brief flirtation with the British Army. Perhaps the most important lesson I learned was one about respect. Many of us part-time soldiers struggled to take the rigid disciplinary requirements of the military seriously, and we would often show our disdain for some of the more ridiculous officers we had to deal with. It was not necessarily a matter of gross insubordination or open revolt, but we were prone to displays of childish ridicule.

One day, a sympathetic officer took us to one side and explained why it was vital to show respect for all officers, no matter how annoying or idiotic they may be as individuals. “Always remember, you are not saluting the person,” he advised. “You are saluting the rank.” This respect for authority, he explained, allowed the army to function. Without it, the British military would quickly become a laughing stock. It is a lesson that Ukraine’s pugilistic parliamentarians would do well to learn.

The 11 December assault on Prime Minister Arseniy Yatsenyuk in Ukraine’s parliament was an example of the complete lack of respect many Ukrainian MPs continue to have for their national institutions. Tellingly, the attacker on this occasion was a card-carrying patriot and veteran of the war in east Ukraine. Unsurprisingly, he has since claimed he was doing his patriotic duty. In reality, he disgraced himself, his party, the Ukrainian parliament, and the entire nation.

Apologists for this sort of conduct will say that Yatsenyuk deserved it. They will claim he is corrupt and inefficient. Such arguments completely miss the point. For better or worse, Yatsenyuk is the current Prime Minister of Ukraine. A physical attack on him in the supposedly hallowed session hall of the Ukrainian parliament is akin to a direct assault on Ukrainian democracy itself. It demeans every Ukrainian and makes a mockery of the country’s European pretentions at a time when Ukraine desperately needs to demonstrate to the outside world that it is a mature partner worth taking seriously. Why should foreigners respect Ukraine when the people elected to represent the country show such a lack of respect for Ukraine’s key institutions?

Inevitably, incidents such as this latest assault will play directly into the hands of Ukraine’s enemies, who are fond of claiming that Ukraine cannot manage its own affairs and needs outside help – preferably from Moscow. We told you so, they will say. This is pretty much what happened last time Ukraine grabbed the world’s attention with an inspirational popular rising against Russian influence and domestic corruption. The 2004 Orange Revolution soon gave way to incessant infighting and squabbling among rival political clans, leading to an outbreak of ‘Ukraine fatigue’ among Ukraine’s erstwhile international supporters. Predictably, the period after 2004 also saw some of the worst parliamentary fistfights in the Ukrainian legislature’s brief history.

Can Ukraine avoid repeating the mistakes of the Orange era? On a positive note, PM Yatsenyuk’s attacker, MP Oleh Barna, was swiftly dismissed from President Poroshenko’s parliamentary faction. This is a step in the right direction, but it will do little to repair the immediate damage caused by Barna’s assault. Images of his bizarre grapple with PM Yatsenyuk have already appeared throughout the Ukrainian and international media, creating the impression of a chaotic state teetering somewhere between parody and collapse. This is most definitely not the new and improved Ukraine so many seek to portray – quite the opposite, in fact. If Ukrainians want the outside world to respect Ukraine, the country’s elected leaders must first demonstrate some basic respect for Ukraine’s institutions. They may not like the man, but they must learn to salute the rank.