TOP ESTONIAN DIPLOMAT: Russian hybrid war attack on Ukraine “did not come as a complete surprise” 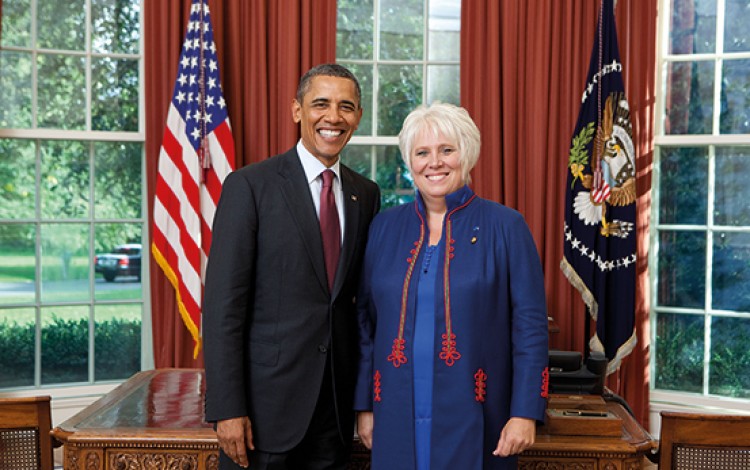 About the interviewee: Marina Kaljurand served as Estonian Foreign Minister from July 2015 until September 2016. She was previously Estonian Ambassador to the US (2011-2014) and Russia (2005-2008)
Business Ukraine magazine

Ever since 2000, Vladimir Putin’s Russia has made a habit of regularly identifying national enemies. For the past few years, Ukrainians have been the leading adversaries, although for a period in late 2015 and early 2016, they had to compete for this dubious accolade with Turkey. America is naturally an ever-present on the list, consistently ranking among the top enemies of Russia. Other popular villains during Putin’s sixteen-year reign have included Georgia, Poland, and Chechnya.

For a brief period in late summer 2007, the honor of “most hated nation” went to tiny Estonia. The Baltic country earned Russia’s wrath by deciding to move a WWII monument from downtown Tallinn to a military cemetery on the outskirts of the city. The Kremlin responded by  launching a massive cyber attack and unleashing an avalanche of anti-Estonian coverage on Russian TV, leading to riots in Tallinn and attacks on the Estonian Embassy in Moscow. In retrospect, this hybrid Russian offensive was a taste of things to come. It was a watershed moment in the evolution of the Putin doctrine, paving the way for bolder acts of aggression.

Estonian diplomat and former Foreign Minister Marina Kaljurand was the Estonian Ambassador to Moscow at the time of the confrontation. Based on her experiences in Russia, she says the subsequent Kremlin takeover of Crimea and hybrid war in eastern Ukraine did not come as a complete surprise.  “There were signs from Russia that were leading in that direction, so I cannot say it was a complete shock. We had seen the cyber attacks against Estonia in 2007 and the war in Georgia in 2008. I think the EU and NATO did not react sufficiently to these earlier steps by Russia. We returned to business as usual within 6 months of the Georgia conflict.”

The danger of demonizing Russia

Speaking to Business Ukraine magazine in Kyiv while in the Ukrainian capital to deliver a series of lectures at the Civil and Political School (CAPS), Ms. Kaljurand recounts how her time in Moscow introduced her to two very different sides of contemporary Russia. “2007 was the low point of our bilateral relations. There was not much official contact. There were attacks on the Embassy and on me personally. However, the attitudes I encountered among ordinary Russians were completely at odds with the official position. It was clear the physical attacks were a red line for the Russian people. They would stop me in the street to express their support and sympathy. Many said they did not agree with the policies of the Estonian government, but this was not the way to treat diplomats.”

Despite the aggressive tactics used against her, Ms. Kaljurand remains generous in her praise of Russia. Ever the diplomat, she stresses her affinity for the Russian people (“Their heart is in the right place”) and emphasizes the importance of understanding Russian concerns rather than simply demonizing the Kremlin. Neverthless, she accepts that question marks remain over Russia’s willingness to engage honestly with the West. “Naming and blaming is never a good approach. Cornering people also doesn’t help. However, if somebody wants to be cornered in order to convince their own audience that everyone is against them, there is not much we can do. I would like to see Russians united in promoting something and not just united against NATO, America, Europe, and so on.”

She is critical of the West’s failure to adopt a tougher stance towards Russia in the 2000s, but does not support policies that would further isolate ordinary Russians from contact with the democratic world. “We have to understand what the Russian people are thinking. I had the opportunity to discuss politics and history in the kitchen with many Russians, just like in the ‘good old days’. For them, democracy is not what it means for us. They associate democracy with the Yeltsin years. He was a much more democratic ruler but salaries were not paid, shops did not have food, and kindergartens closed. That is what Russians remember about democracy. They simply do not see democracy as we do. This is why it is extremely important for young Russian people to have the opportunity to go to Europe. They must be able to visit Estonia to see what it means to be a democratic country. Their thinking is different and we have to acknowledge that.”

From July 2015 until September 2016, Ms. Kaljurand served as Estonian Foreign Minister, placing her in the frontlines of diplomatic efforts to push back against Russian aggression in Ukraine. Estonia is widely regarded as particularly vulnerable to Kremlin hybrid attack, with military analysts widely identifying the Baltic nation as a likely target if Russia chooses to test NATO resolve. Ms. Kaljurand stresses the need to view the implications of current Russian policy in a far broader context. “We are not talking about a threat to Estonia or a threat to the Baltics. We are talking about a risk to the whole of Europe, to the EU, to NATO.”

It is far from clear whether all of Ms. Kaljurand’s former EU colleagues share this sentiment. She recognizes the difficulties of reaching a consensus on Russia that suits all 28 EU member states, but cautions against reading too much into pro-Russian statements issued in national capitals on the eve of major EU meetings. “Within the EU it is no secret that countries have different ties to Russia. They have different business interests with Russia and different cultural ties. Before coming to foreign policy summits in Brussels, foreign ministers often say a variety of very different things in their own capitals, but once we down at the table, it has been relatively easy to agree on the principles of how we should build our relations with Russia.” Her advice to EU foreign policy analysts is simple. “Don’t pay so much attention to what political leaders tell their domestic audiences. Pay attention to their official positions as expressed in Brussels.”

No panic over Trump presidency

The election of Donald Trump as the next US President has generated doubts over the entire future of the international coalition opposing Russian aggression in Ukraine. Audiences throughout Eastern Europe were left alarmed by Trump’s campaign trail praise for Vladimir Putin, while prominent Trump supporter Newt Gingrich notoriously described Estonia as ‘the suburbs of St. Petersburg.’ Ms. Kaljurand, who served as Estonian Ambassador to the US from 2011 until 2014, does not see the advent of a Trump White House as cause for undue concern. “We should react calmly. This was the democratic decision of the American people and we will have to live with the new reality it creates. Right now, the most important thing is to build working contacts with Donald Trump and his team. It will be a challenging time for our diplomats and politicians. Nevertheless, my message is ‘don’t panic’. Let the president-elect come out with his policies. We have all seen how he is already stepping back from some of his campaign promises. Let’s give him time to think. Let him go through the transition. Meanwhile, we will continue networking.”

And that ‘suburbs of St. Petersburg’ comment? “Everyone is paying a lot of attention to that remark, but we must also pay attention to the comments that followed. Many people close to president-elect Trump have said it was not the right kind of statement to make. If you want to have the full picture, you have to look at subsequent comments made by others, many of whom will have positions in the Trump administration.”

One area were US president-elect Trump and Ms. Kaljurand see eye to eye is on the need for NATO members to increase their military spending. “European NATO members have to do their fair share and pay their way. Estonia has been reaching the 2% target for many years and this has given us the right to be vocal in reminding our allies to do likewise. It’s been really encouraging over the past year-and-a-half to see many countries, including our Baltic neighbours, increasing their military spending.”

Since leaving the Foreign Ministry in September, Ms. Kaljurand has yet to decide on her next steps. An independent politician with no affiliations to any Estonian political party, she is not sure whether she will return to the diplomatic service or seek new challenges elsewhere. Given her unique insights into contemporary Russia, America, and the EU, it is likely Estonia will want to make full use of her diplomatic skills for some time to come.