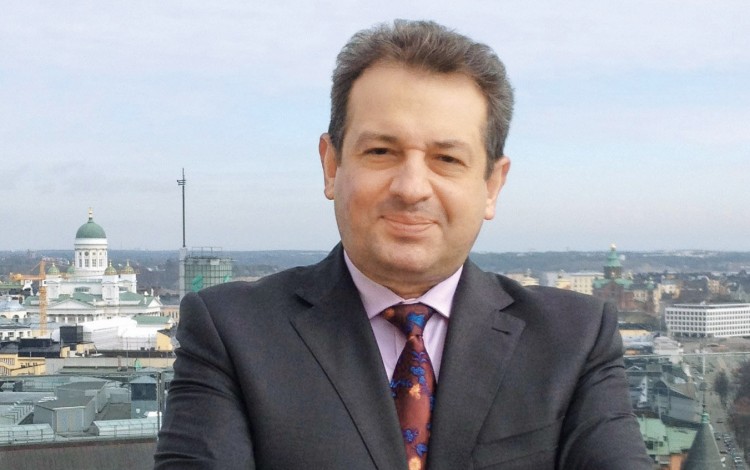 The year 2018 marks the one hundredth anniversary of the establishment of diplomatic relations between Finland and Ukraine. Indeed, back in 1918, Finland was one of the first countries to open a diplomatic mission in Kyiv. That same year, the Ukrainian diplomatic mission was among the first six foreign embassies to open in Helsinki, the capital of newly independent Finland.

Konstiantyn Lossky was the first Ukrainian Ambassador to Finland and Herman Gummerus was the first Ambassador of Finland to Ukraine. After completing his diplomatic mission in 1919, Ambassador Gummerus wrote a book of memoirs entitled: “Ukraine in Crucial Times.” “We Finns will enjoy the success of the independence aspirations of the Ukrainian people, which are so much in the interests of our country. When, one day, the time comes for Ukraine’s freedom, it will be clear that the desire to establish friendly relations between Finland and the country of Bohdan Khmelnitskiy, Mazepa and Shevchenko was not in vain,” wrote Ambassador Gummerus at the time.

The historical destinies of the two countries would diverge significantly during the course of the twentieth century. Finland managed to hold on to its independence and was able to celebrate its centennial jubilee in 2017, while Ukraine became part of the Soviet Union. When the USSR finally collapsed, Finland recognized the independence of Ukraine on 30 December 1991, and on 26 February 1992, the two countries restored diplomatic relations.

This shared past creates a promising foundation for contemporary and future relations between our two countries. Bilateral relations are currently developing with new impetus. Over the past three years, the presidents of Ukraine and Finland have had a dozen meetings and numerous telephone conversations. In 2015, the Speaker of the Ukrainian Parliament visited Finland. The foreign ministers of both countries have also exchanged visits. Ukraine appreciates Finland’s unwavering support for the sovereignty and territorial integrity of Ukraine.

Finland supports Ukraine on both the political and humanitarian levels. For example, Finland is the third largest contributor to the OSCE Special Monitoring Mission to Ukraine. In 2016, Finns built a state-of-the-art new school for local Ukrainian schoolchildren in the village of Antonivka in Kherson Region.

Meanwhile, the official visit of the President of Ukraine to Finland in January 2017 has led to a significant intensification of political and intergovernmental contacts between the two countries. Thanks to this new impetus, there are significant developments in the spheres of energy efficiency, education and business.

In November 2017, the Foreign Ministry of Finland and the Nordic Environment Finance Corporation, with its headquarters in Helsinki, signed an agreement to set up a trust fund that will provide financial support for energy efficiency and renewable energy projects in Ukraine. The total value of the new trust fund is EUR 6 million. The Finland-Ukraine Trust Fund will promote cooperation and identify projects in the fields of energy efficiency, renewable energy and alternative energy resources for power and heat generation, as well as for district heating networks. Ukraine and Finland are also preparing to sign a bilateral agreement on co-operation in the education sector. This cooperation initiative aims to improve both the quality of education and perceptions of the Ukrainian education system.

Commercial ties between the two countries are also strengthening. According to the State Statistics Service of Ukraine, in the first three quarters of 2017, the total volume of trade in goods and services between Ukraine and Finland increased by 17.5% compared to same period of 2016. A growing number of Ukrainian companies are interested in the development of new European markets for products. They are actively establishing new business contacts, in particular with Finnish partners. There are also currently over 40 companies with Finnish investments present in the Ukrainian market.

The October meeting in Kyiv of the co-chairs of the joint intergovernmental Commission on Trade and Economic Development contributed to the ongoing dialogue underpinning this growing bilateral commercial relationship. The next goal on the horizon is to hold the seventh meeting of the Commission in Kyiv in 2018. The EU-Ukraine Association Agreement and Ukraine’s visa-free EU status, both of which came fully into effect in 2017, will provide powerful additional stimulus for deepening Ukrainian-Finnish business cooperation.

At present, the only issue where the two countries do not see eye to eye is Russia’s proposed Nord Stream 2 pipeline. Finland looks at this issue in commercial terms, whereas Ukraine considers implementation of the Nord Stream 2 project as very harmful to European energy security. Ukraine remains convinced that it is a purely political project.

Even in this matter, both parties deem it necessary to hear each other out. The last time it was under discussion by the Prime Minister of Finland and the President of Ukraine was during the EU’s November 2017 Eastern Partnership Summit in Brussels. We hope that our Finnish colleagues will adopt a balanced approach to further consideration of this issue within the framework of the EU.