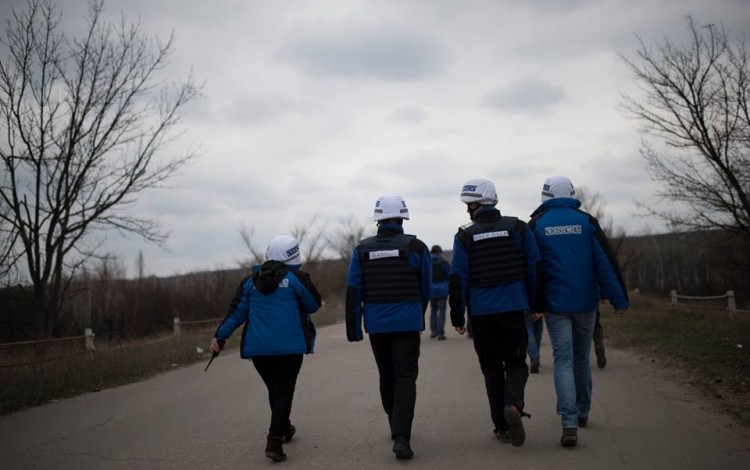 Convenient scapegoats? OSCE monitors in east Ukraine are regularly exposed to serious personal risk but have also been the target of criticism over a perceived failure to expose the extent of Russian involvement in the conflict
Business Ukraine magazine

The OSCE Special Monitoring Mission (SMM) to Ukraine has been responsible for keeping track of the conflict in the country’s east since fighting first erupted in April 2014. The organization has gained huge exposure via its prominent role in Ukraine, but it has also attracted significant criticism. The most vocal complaints have focused on the presence of Russians within the monitoring mission. As a key member state of the OSCE, Russia has every right to send observers to join the monitoring mission to Ukraine. Nevertheless, critics have argued that these Russian observers make a mockery of the OSCE’s efforts to monitor a conflict they regard as fuelled and directed by the Kremlin.

Polish academic and international relations expert Lukasz Adamski was among the first batch of monitors to join the OSCE mission to Ukraine in spring 2014. He left the OSCE SMM after completing a six-month stint in Ukraine, and has since spoken of his frustration over the limitations of the monitoring mission.

Now back in Warsaw, 35-year-old Adamski currently heads the Research and Projects Office at the Centre for Polish-Russian Dialogue and Understanding (not to be confused with the Kremlin-backed ‘Foundation Polish-Russian Centre for Dialogue and Understanding’). He spoke to Business Ukraine magazine about his experiences with the OSCE in Ukraine, and explained why he reserves his most stinging criticism for the Western countries he accuses of seeking to appease Moscow.

You served in the initial OSCE monitoring mission from March-September 2014. What motivated you to sign up for the mission?

There were two main reasons. Russian aggression against Ukraine demanded a rapid reaction from the international community, including political support for Ukraine. Once the OSCE was designated one of the main tools to be deployed in Ukraine, I decided to apply for the post of reporting officer – the person responsible for preparing SMM reports related to the security situation, democracy, rule of law and human rights observance in Ukraine. Additionally, I saw this role as an opportunity to develop my experience as an analyst of international politics. I felt that working in an international organisation would give me a better understanding of foreign policy issues.

You have previously stated that you did not extend your 6-month contract as an OSCE monitor in east Ukraine because you 'didn't see any sense in working for the organization.' How did the realities of the monitoring mission in Ukraine differ from your expectations?

When I applied for the job of reporting officer in March 2014, I was convinced that the OSCE should collect evidence of Russian aggression against Ukraine in Crimea, as well as evidence of Russian interference in the rest of Ukraine. I assumed that every reasonable and objective observer of Ukraine’s situation would understand that the country was a victim of Russian aggression. From my perspective, the most urgent task was preventing Russian subversion in southern and eastern Ukraine. I thought that as the OSCE reporting officer, I would be able to prepare analytically solid reports and thus influence the decision-making process of the OSCE and – more broadly – the international community. I soon realized I was mistaken. To some extent, I was guilty of being a little bit naïve.

According to established OSCE practice, reports should not provoke major controversies. Instead, they should be politically acceptable to all member states, with the emphasis on ‘balance’ rather than ‘objectivity’. In addition to this approach, I also quickly learned that I was only one of several links in the chain of report preparation. Information provided by OSCE monitoring teams had been often already been ‘sterilized’ by the time it reached me. As a result, the reports posted on the OSCE website were often far removed from that what I personally wished to include, and what should have been included.

The quality of the OSCE mission’s human resources was also a source of disappointment. There is no doubt in my mind that the overwhelming majority of the mission’s members were unprepared to deal with the politics of the situation they found themselves in. Many of them were former police officers or military officers who could report what they had seen, but they were not capable of understanding the political significance of what they had seen. They were able to collect information, but could not analyze it effectively.

It is obvious that you cannot collect the necessary information, not to say evidence of Russian aggression, if you are unable to find the right interlocutors, identify problems, ask the right questions, and read between the lines. Many of the monitors sent to Ukraine by OSCE member states were simply not prepared for the task. Furthermore, very few of them spoke fluent Russian. I met only one fellow monitor who spoke Ukrainian.

My impression was that many monitors were not interested in getting into the politics of the situation. Instead, their priority seemed to be maintaining their well-paid positions for as long as possible. Some were afraid that the mission’s mandate might end abruptly. They feared a Russian veto if the mission abandoned political correctness and reported openly.

In your previous interviews, you have spoken critically of the Russian role in the OSCE monitoring mission to Ukraine. Specifically, you commented: 'when a state is both a party to a conflict and a mediator, it makes no sense.' Based on your experience with the OSCE in Ukraine, do you believe the mission was fatally flawed from its conception?

Firstly, it is important to note that the SMM mandate did not explicitly mention Crimea, which effectively prevented the mission from developing its activities in the peninsula. Secondly, Russia was a party to the conflict but OSCE member states, including Ukraine, agreed in March 2014 that Russian monitors could participate in OSCE SMM activities in Ukraine. This gave Russia the opportunity to influence the mission via monitor reports, and, in some cases, via direct contact with politically unexperienced Western observers.

For example, Russian members of the SMM would tell OSCE colleagues that federalization is the only possible solution for Ukraine, or that the Russian language should be recognized as the second state language. They would refer to the experience of Finland or Switzerland, forgetting to mention that every country is specific and state bilingualism is more the exception than the rule in Europe. These narratives seemed convincing to some Western monitors, especially those viewing Ukraine from an uninformed and narrow perspective.

The most important flaw in the mission lies in the OSCE decision-making process, which reflects the will and political expectations of the organisation’s member states. The OSCE operates on the principle of consensus. This is the legal basis of its activities, which – in case of Ukraine –serves to prevent any attempts to use the mission as a political instrument to defend the victims of aggression. In this sense, my criticism is not directed against the mission management and my former colleagues, many of whom worked very hard. My criticism is primarily against those Western states and societies that pursue a policy of appeasement towards Russia.

It seems to me that the OSCE could have done much more in the first months of its activities in Ukraine. However, this might have put the monitoring mandate at risk and could also have posed a threat to the future of the organization as a whole. Was this cautious approach justified? Was it beneficial to Ukraine, given the political conditions in the country at the time? These are separate issues, but it is important to ask such questions.

The OSCE Special Monitoring Mission to Ukraine is seen by many as a continuation of the organization's monitoring role during the 1990s Balkan Wars. What do you regard as the key similarities and differences between the monitoring challenges in Ukraine and the Balkans?

The differences are obvious. In the Balkans, we faced conflicts between different nations.  Russia supported the integrity of Yugoslavia against separatism.  Sentiments of solidarity with Orthodox Christians, mainly Serbs, were also visible in Russia, but one should not overestimate its political significance. In Ukraine, Russia is a party to the conflict and is present in both Crimea and the Donbas. The Kremlin’s policy towards Ukraine is rooted in an obsolete and politically dangerous vision of Russian identity encompassing all Eastern Slavs. This leads us to the conclusion that the conflict in Ukraine is not only a war between two states, but also a conflict of identity for both Russians and Ukrainians, provoking enormous emotions among both political elites and the public. In the case of the Balkans, the situation was different.

The mission worked extremely hard during the days following the MH17 attack. Many observers witnessed the crash site and were personally shocked, which is absolutely understandable. It opened the eyes of those who had previously underestimated the significance of Russian interference in the conflict.

Based on your assessment of the OSCE's strengths and weaknesses in east Ukraine, what role do you see for the OSCE in future conflict zones?

I would propose to either use the OSCE only in small regional conflicts, or to apply the ancient Roman principle: ‘nemo iudex in causa sua’ (literally: ‘nobody should be a judge in their own case’). In line with this principle, OSCE member states involved in conflicts would be barred from participating in monitoring missions.