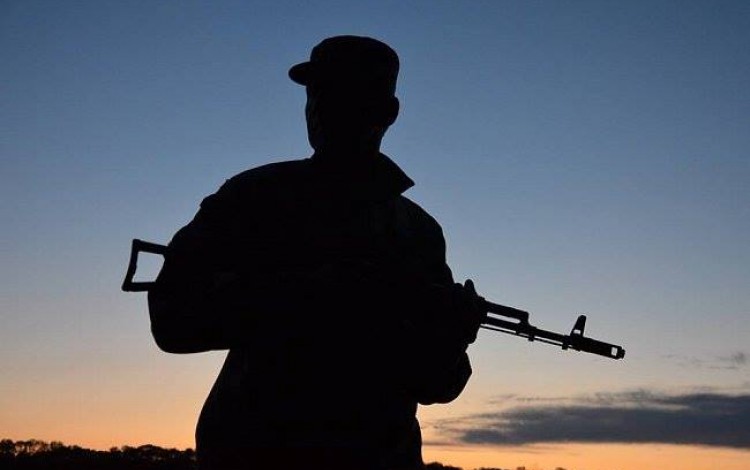 A top U.S. general told OSCE delegates this week that Moscow bears full responsibility for the conflict in east Ukraine, as Kremlin denials over a Russian army presence in the combat zone continued to unravel. The commander of American forces in Europe, Lieutenant General Ben Hodges, made his outspoken comments at the annual OSCE security review in Vienna on 23 June. Hodges’s comments come as an increasing body of independently sourced evidence continues to point to a direct and large-scale Russian military role in east Ukraine that is totally at odds with Russian claims of non-combatant status.

“Russia has infiltrated large numbers of soldiers and huge quantities of weapons, ammunition and other military equipment into eastern Ukraine, fomenting conflict and unrest that has left more than 6,000 people dead and displaced well over 1.3 million. Let us be clear: the responsibility for this vast human suffering, economic devastation, and political and social turbulence lies squarely with the Kremlin and the separatists it so clearly supports,” Hodges told participants of a special OSCE session devoted to Ukraine.

America’s top commander in the European theatre went on to address the specific nature of Russia’s military involvement in the conflict in some detail, highlighting some of the many exclusively Russian weapons systems identified in the east Ukrainian combat zone. “Versions of the T-72 tank, that only Russian forces possess, have been recorded in Ukraine since at least August 2014, with continued reporting throughout just this past week. The SA-22 or Pantsir-S1 Air Defense System was sighted as early as November 2014. The Russian Smerch rocket was recorded in eastern Ukraine as early as January and February of this year. Grad-K Rocket Systems were seen as early as January this year. These are uniquely Russian systems. As a career military officer I can assure you that the separatists, who President Putin refers to as coalminers and tractor drivers, could in no way maintain, resupply, or operate this equipment with tactical proficiency. These are all sophisticated weapons systems that operate within a network of similar systems which require extensive command and control, networking, and training. They are dependent on Russian forces operating within eastern Ukraine and just across the border.”

The Kremlin continues to maintain an official position of complete denial over the presence of Russian troops in Ukraine – a position President Putin has reiterated on numerous occasions in recent months. In addition to Putin’s frequent denials, other Kremlin officials have sought to question the evidence provided as proof of direct Russian military involvement, while international media outlets have faced pressure to refrain from any definitive declarations regarding a Russian army presence in the conflict zone.

Hodges addressed the credibility of these Kremlin denials directly, arguing that attempts to portray Russian army personnel as non-military volunteers constituted a grave insult to the intelligence of the international community. “When President Putin refers to them by saying “if they are soldiers then they are on leave”, then what an incredible insult to the political leaders of our countries that he would talk to us that way and expect us to believe it,” the American general told OSCE delegates in the Austrian capital.

International patience over Russia’s denials has long been wearing thin as evidence of direct Russian army involvement in east Ukraine has mounted. The Kremlin’s credibility crashed following Putin’s U-turn confession over Russian army deployment in Crimea, and has since failed to recover.

Russia initially denied any military role in the early 2014 seizure of Crimea, only for Putin to concede that Russian forces did in fact facilitate the takeover of the Ukrainian peninsula. The Crimean invasion had relied on the use of so-called ‘little green men’, the tongue-in-cheek term coined for Russian troops operating without any insignias and with their faces hidden.

When similarly armed and outfitted groups of unidentified militants began storming regional towns in east Ukraine in April 2014, few were prepared to believe fresh Kremlin claims that Russia was not involved. This mood of international skepticism has only grown since, as the conflict has escalated and the firepower of the militants has increased dramatically.

The Ukrainian government has provided a considerable body of evidence pointing to the Russian army presence in east Ukraine, much of it subsequently corroborated by a range of additional third-party sources. These have included NATO, foreign intelligence agencies, journalists and international human rights groups such as Amnesty International, which released a report in September 2014 highlighting the Russian army role in east Ukraine.

Journalists from high-profile publications such as the UK’s Guardian and Telegraph newspapers first reported witnessing Russian military convoys crossing the Ukrainian border as early as August 2014, while other international correspondents have provided detailed accounts of numerous encounters with Russian military personnel operating inside Ukraine.

Some of the most powerful evidence has come from Russian soldiers captured inside Ukraine. In August 2014, 10 Russian paratroopers where taken prisoner in east Ukraine. Putin claimed they had simply ‘gotten lost’, sparking much black humour about Russia’s ‘accidental invasion’ of Ukraine.

In May 2015, Ukrainian forces captured two Russian Special Forces soldiers near Luhansk. Both detainees subsequently confirmed to international observers that they were serving members of the Russian military, and rejected Kremlin claims that they had resigned from Russian army service prior to their deployment in Ukraine. None of this evidence has forced the Kremlin to change its official position that they are no Russian troops in Ukraine.

Instead, the Kremlin has gone to extreme lengths in its attempts to conceal the secret war that the Russian military is waging in Ukraine. The subject of Russian troops in Ukraine is almost completely absent from the otherwise extensive and often lurid Russian media coverage of the Ukraine crisis.

Russian human rights groups working to protect the rights of soldiers and their families have faced official harassment and been labelled as ‘foreign agents’ for their attempts to highlight the plight of soldiers being sent to Ukraine in breach of the Russian Constitution.

Meanwhile, local and international journalists attempting to speak to relatives of Russian troops killed in Ukraine have faced violence, with a BBC crew investigating the story attacked in late 2014.

As an additional precaution, all mention of ‘peace time’ Russian military casualties is now classified. Under the new regulations, introduced recently via presidential decree, even family members of deceased Russian soldiers risk prosecution if they dare to speak publicly about their loss.

The Kremlin position rests on the alleged absence of ‘smoking gun’ evidence of a Russian army presence. Unsurprisingly, the Russian authorities have gone to great lengths to make sure this ‘smoking gun’ evidence remains elusive. According to accounts in Russia’s few remaining independent media outlets, Russian soldiers sent to Ukraine typically sign discharge papers prior to their deployment. They also leave their mobile phones and all personal identification documents behind.

If caught, they claim that they are ex-military volunteers who joined the ‘Ukrainian separatists’ of their own free will. The deliberate absence of conventional military documentation makes it very hard to demonstrate conclusively that they are active members of the Russian armed forces, no matter how obvious it may be.

Given the importance of plausible deniability to Russia’s hybrid war strategy, there is little chance that the Kremlin will change course in the coming months and admit to deploying the Russian army in Ukraine. Instead, the denials will continue, with evidence to the contrary dismissed as insufficient or fake.

This will have little impact on international opinion, which has long since been convinced of the direct Russian role in the conflict. However, the Kremlin’s defiant denials make a resolution to the Ukraine crisis even more difficult to achieve. By refusing to acknowledge a role in the conflict, Russia makes it harder to discuss de-escalation measures in a frank and productive manner. The Russian army role in the conflict is the elephant in the room, and it looks likely to remain so.